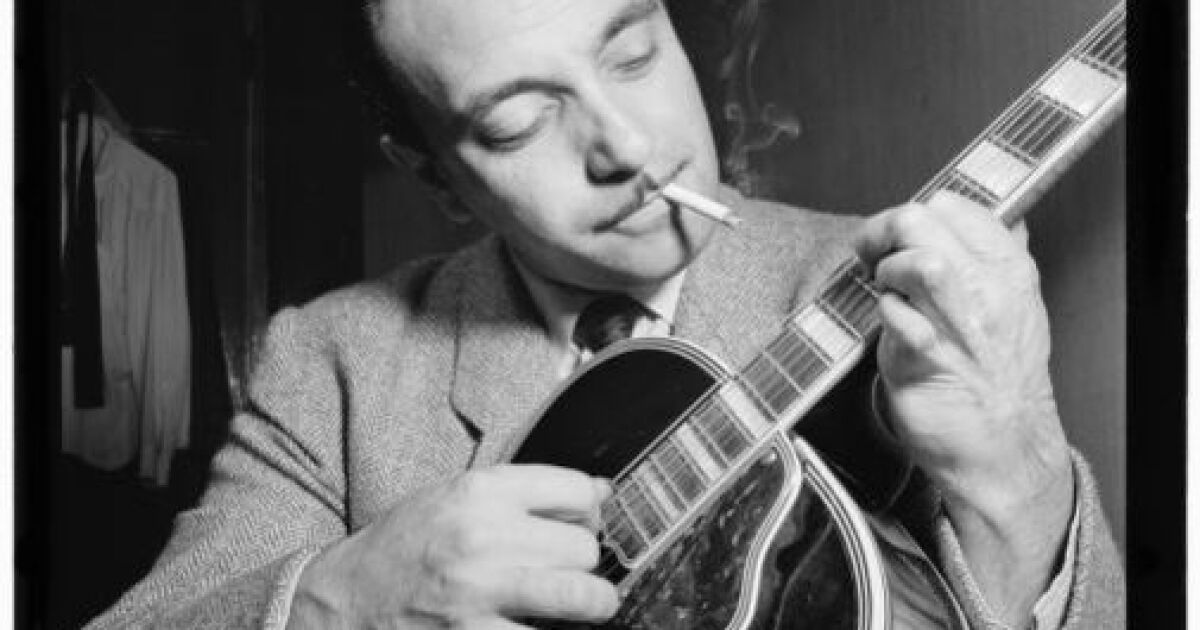 With gypsy jazz, Django Reinhardt put the guitars in the foreground

Listen to the story above or read the script below:

Europe in the 1920s was full of joy and prosperity. The Great War was over and a cross-pollination of cultures and ideas was palpable. Paris was the artistic oasis of painters, poets and musicians who all interacted in cafes and nightclubs and music was everywhere.

Many artists performing in the region were gypsies, infusing regional popular music with influences from Russia, Italy, Spain and the Middle East.

Jean Baptiste Reinhardt, known as “Django”, was born in Belgium into a Gypsy-Roma family. He spent most of his childhood in gypsy camps on the outskirts of Paris where he learned to play the violin and then the banjo-guitar. By the age of 13, he was able to earn a living by gambling.

At 18, his trailer caught fire and he suffered severe burns that paralyzed his fourth and fifth fingers. During his recovery, his brother buys him a new guitar and Django sets out to relearn how to play.

Upon hearing American jazz, Reinhardt’s musical approach changed as he absorbed the music of Louis Armstrong. This led him to a new friend, the classically trained French violinist, Stéphane Grappelli, who had similar interests in early jazz artists, including another guitar-violin duo of Eddie Lange and Joe Venuti.

In 1934 Grappelli and Reinhardt formed Quintet of the Hot Club of France.

The original line-up was Django on lead guitar, Stéphane on violin, two rhythm guitars and a double bass. The group’s early recordings included the songs “Dinah”, “Tiger Rag”, and “Oh Lady be Good”. The records were a hit and the quintet found success on both sides of the ocean.

The groups “Jazz Manouche”, as they were also called, as well as the names “jazz manouche” or “swing manouche”, kept a similar configuration consisting of a lead guitar, a violin, two rhythm guitars and d ‘a bass guitar. Rhythm guitars provide the percussive beat in conjunction with a heavily syncopated bassline. Both rhythm guitars were needed in the early 1930s because there was no amplification available and dance halls were large and noisy.

The Second World War broke out in 1939 while the quintet was on tour in England. Django returned to Paris while Stéphane remained. Django performed and recorded throughout the war during the occupation.

After the war ended, Reinhardt toured America with Duke Ellington’s orchestra and performed to packed houses, including Carnegie Hall, before returning to Paris. In 1953, Reinhardt died suddenly at the age of 43.

While a few musicians continued to perform his music in order to keep the style alive, a strong resurgence in Django’s music occurred in the late 60s and 70s with the help of Stéphane Grappelli and family members. Reinhardt.

In 1980, another 13-year-old guitar prodigy, Biréli Lagrène, recorded his first gypsy jazz album. Having become famous, he soon left for America and embraced fusion music. He returned to his original style in 2001 with the virtuoso album Gypsy project.

Currently, the genre is growing with musicians and influences from all over the world, with the music of Frank Vignola, Gonzalo Bergara and Stéphane Wrembel; and in bands such as The Rosenberg Trio, Rhythm Future Quartet and Seattle-based Pearl Django.

As well as the Django Reinhardt Festival in France. Now over 50 years old, the 4-day event celebrates not only the traditional sounds of the genre, but styles that have been heavily influenced by music’s rich history – continuing to infuse music through the cross-pollination of cultures and ideas.

Throughout the month of April, we will illustrate different styles of jazz through time that make the history of jazz through storytelling and music. From the early 1900s to 2022, we will travel from Dixieland to Modern Jazz, from Big Band to Hip Hop.

Listen to episodes every weekday at 9 a.m. and 7 p.m. on 88.5 FM and KNKX.org. See all stories from the KNKX History of Jazz project.

Nearly half of Americans are ‘financially stressed’