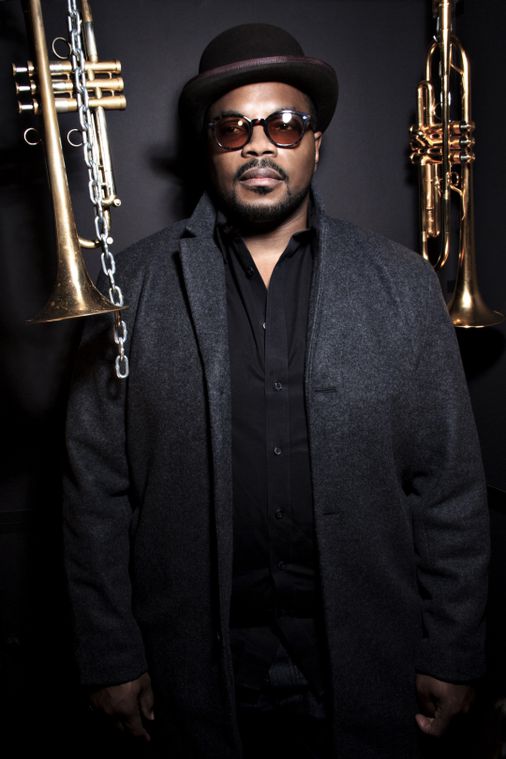 With a book and an album, Jeremy Pelt pays homage to the pushers of the limits of jazz

Pelt, whose quintet will perform the project’s music at Scullers on Friday, decided to attempt something similar, in which prominent black musicians speak candidly about the race and tradition of jazz with a trusted peer.

He began interviewing musicians, including Warren Smith, usually doing it at home. Then COVID struck, unexpectedly making the project easier. With the concert halls closed, Pelt and his subjects had more free time to talk.

“There’s that aspect for sure,” Pelt confirms over the phone, preparing dinner the way he does and still a bit jet-lagged from a recent tour of Europe. “I think I might have had about 30 interviews before the pandemic hit, and then like everyone else I switched to Zoom. And everyone was already somehow used to being able to do that. . . . So I just said, ‘Alright, just let me corner them.’

“And they were all very easy going because, two things: we all have egos, so you don’t have to breathe a word for someone to talk about themselves. And second, I have a sort of respectability there, so they can trust me to wear it, especially in the tradition of “Notes and Tones.”

To date, Pelt has conducted 80 interviews, 15 of which include “Griot: Examining the Lives of Jazz’s Great Storytellers, Vol 1”. It has sold 1,000 copies so far, he says, and plans to publish four more volumes.

The book elucidates the state of jazz and race relations a few generations beyond the “Notes and Tones” era, with Pelt, 44, conversing one-on-one with a mix of old and new, among which René Marie, Wynton Marsalis, Terri Lyne Carrington and JD Allen. Two of the artists – Robert Glasper and Ambrose Akinmusire – are younger than Pelt himself.

“I literally met Jeremy the first night I was in New York City,” recalls Akinmusire, 39, who arrived from Oakland to begin studies at the Manhattan School of Music. “I landed, took a cab to the dorm and saw he was playing. I went down and we clicked. He was a great mentor to me at times, especially in New York, really caring for me during those early years.

Akinmusire is excited about Pelt’s book.

“I think jazz research is important,” he says. “It’s always really cool to have a different point of view, especially when the point of view comes from a more informed source. It’s a nice extension of what Art Taylor did.

Pelt, who graduated from Berklee College of Music in 1998, got more from his interviews than from a book. His album “Griot: C’est important! – released in February – consists of a spoken intro by Pelt, audio clips from eight of the book’s interviews and new Pelt compositions derived from seven of these clips.

“I sort of hear things in a cinematic way, if that makes sense,” Pelt explains of how his subjects’ lyrics led to the music he wrote. “I was a film music major in school, so I guess it goes hand in hand. But I hear things in this direction. So whatever kind of vibe it gives me, that’s where I pretty much start.

“So for ‘Don’t Dog the Source’ I wanted something that was really on the inside, but also on the outside – that’s why there wasn’t any real chord accompaniment. Whereas something like ‘A Beautiful [Expletive] Lie ‘was supposed to be very beautiful, that’s why I added a harp. Very dreamy, but ultimately it’s a lie because of the story being told. And so on.”

The last two quotes from the album come from Warren Smith and Akinmusire, two men deeply rooted in the tradition of jazz but open to pushing its limits.

Smith, 87, says he was discouraged from taking an interest in classical music by a racist teacher and then performing in the pit orchestra shortly after for “West Side Story.” Over the course of his career, he has performed with a wide range of stars and limit pushers, from Nancy Wilson and Quincy Jones to Max Roach and Anthony Braxton.

Akinmusire has established himself as one of the most adventurous composers of his generation, incorporating string quartets and rappers into his own music and collaborating over the years with Steve Coleman, Mary Halvorson, Roscoe Mitchell and Jen Shyu. Her quote snippet has to do with how the contextualization of the music in the story it is made in turns it into more than just notes and inspired the album’s final song, “Relevance.”

Was Pelt signaling something important by bringing these two musicians together – so distant from each other but so similar in their musical disposition – at the end?

“You pretty much imagine something that’s not the case,” Pelt replies. “Every time I put things in order, it’s more about how it sounds and where I feel good.

“But it’s good.” He’s laughing. “When you say it like that, now that you mention it, I can sound like a genius. “

The best jazz on Bandcamp: November 2021