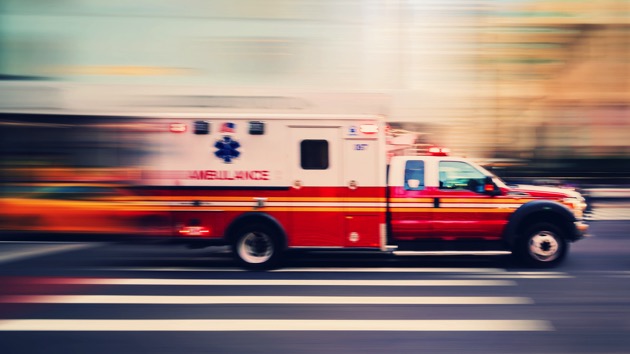 (NEW YORK) – Henry Ray Fischbach, a New York jazz singer, was performing at a neighborhood restaurant in July when he collapsed midway through.

“I felt great until this last issue and as I sang this song I started to feel very dizzy and weak,” Fischbach, who goes by the stage name Henry Ray, told Good Morning America. “I thought I was just very dehydrated.”

Fischbach, 66, had actually gone into cardiac arrest and his heart had stopped beating.

As his wife and other onlookers screamed for help, three medics who stopped by the restaurant for after-work drinks rushed onto the stage to help.

“We could see he was on the floor and by his side,” said Dr. Matthew Simhon, an orthopedic surgery resident at NewYork-Presbyterian / Columbia University Irving Medical Center. “Her skin was very blue. We felt no pulse. He wasn’t breathing at all.

The trio of medics worked on him for more than 10 minutes, until paramedics arrived with a more advanced defibrillator that managed to get Fischbach’s heart to beat again.

Once in the ambulance on the way to the hospital, Fischbach was alert and able to appreciate the severity of his condition.

“One of the paramedics in the ambulance told me, ‘You just died twice,'” Fischbach recalls. “He told me there were doctors in the audience, but I didn’t know during the show that I was standing a few feet away. Guys who would change my life, who would save my life.

Fischbach was rushed to New York-Presbyterian / Columbia University Irving Medical Center, where he had a stent placed in his left coronary artery to relieve the blockage.

While in hospital and after returning home, Fischbach never knew the names of the three doctors who saved his life and was never able to thank them.

That changed on August 27, when, just a month after suffering cardiac arrest, Fischbach returned to the stage at the same restaurant where he collapsed.

The three doctors were in the audience that evening, thank you to the restaurateur who invited them to come back and meet Fischbach.

“I had the chance to express the inexpressible, the gratitude for saving my life,” said Fischbach. “I dedicated this evening to the three of them and the gift of life and the gift of being able to celebrate music that night.”

“They are the nicest and humblest doctors,” he added. “It’s amazing and they’re just like, ‘This is what we’re doing.’ “

Simhon and Luzzi said they were just grateful to be in the “right place at the right time”.

Luzzi described Fischbach’s return to the stage after saving his life as a “mixture of emotions”.

“Relief is one, gratitude is another for being in the right place at the right time and surprise is another,” he said. “He was back in relatively short order and danced and sang again, which is quite unusual.”

The two doctors also stressed the importance for people to learn CPR and chest compressions so that they can also intervene and help in an emergency.

“To be able to do CPR is really the difference between life and death,” Luzzi said. “Unless someone else also knows about CPR and does what we did, [Fischbach] most likely would not have survived.

Juneau Jazz & Classics announces the program of the Fall Festival