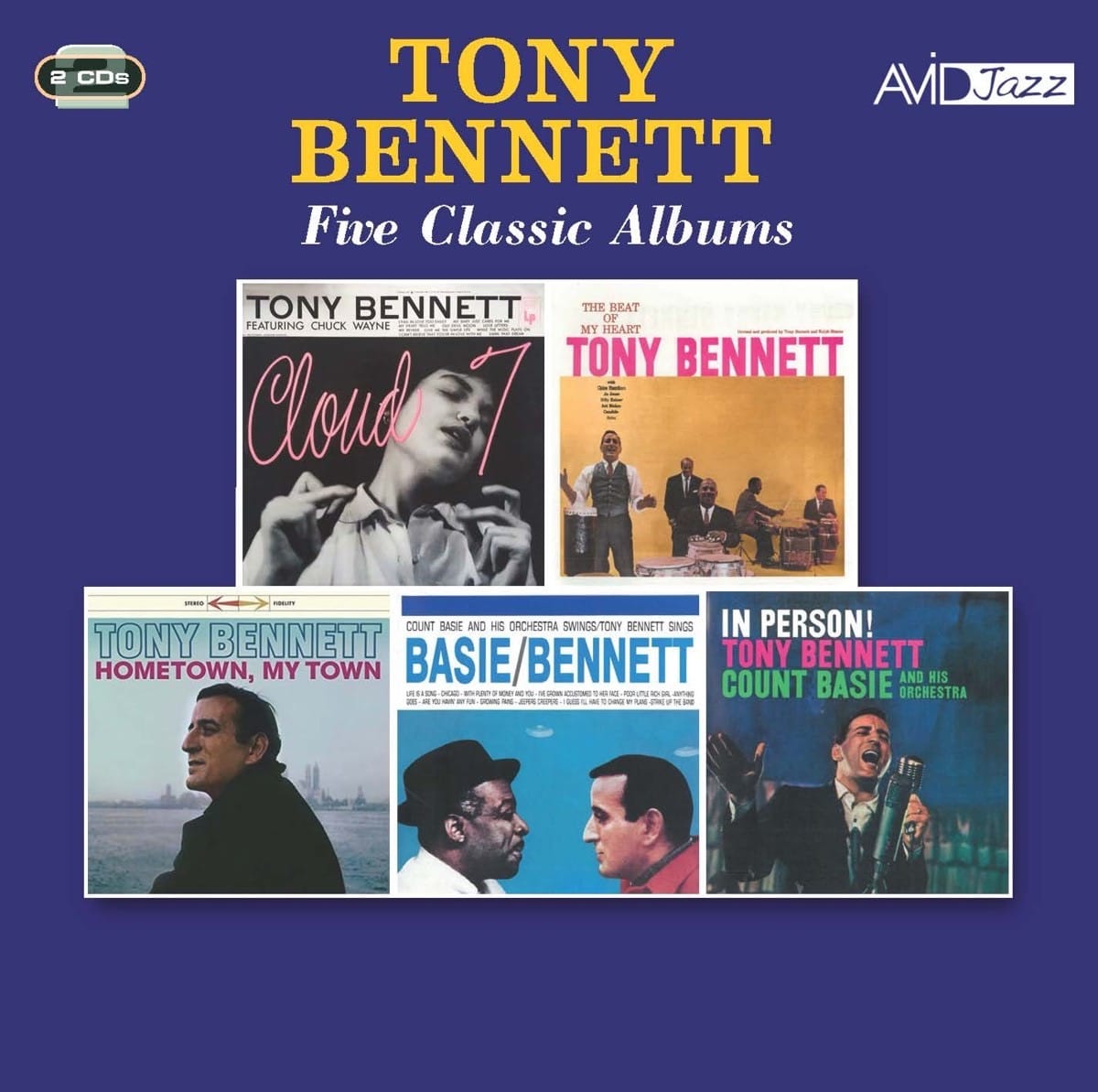 These early Bennett albums are presented in chronological order spanning 1954 to 1959, and provide 51 tracks, all but a half-dozen familiar to anyone seriously listening to popular music circa 1950. All five albums feature excellent musicians, including l orchestra Count Basie, but also like Urbie Green, Ralph Sharon, Al Cohn, Eddie Safranski, Jo Jones, Milt Hinton and Don Lamond.

My main problem with Bennett is that overall he has a tendency to “wander”, as they say in the theater, without the feeling of “singing just for you” that Sinatra – a notable admirer of Bennett – effortlessly pulled off. .

The first album, Cloud 7, begins with I Fall In Love Too Easy, which Jule Styne and Sammy Cahn wrote for Sinatra in her first MGM film, Anchors weigh, and which I have never heard of outside of the film. This album is packed with top notch material including My Heart Tells Me by Harry Warren, the rarely heard verse from Give Me The Simple Life and, perhaps just to shade the rest, Darn That Dream.

On the second album, The beat of my heart, Bennett seems a little more adventurous, offering Porter’s Love For Sale, a first-person account of the life of a whore and never, to my knowledge, performed by a man. Another quirky choice, the Jerome Morross-John Latouche Lazy Afternoon by The golden apple which, while not gender specific, is also invariably performed by a woman.

From the third album, Hometown, my town, it is as if he suddenly realized that there was a fifth gear in the car. It really goes to town on Penthouse Serenade and turns a nice bouncy average read on Irving Berlin’s All My Myself. As he did on Penthouse Serenade, he also adds the verse on I Cover The Waterfront by Johnny Green which scores him extra points in my neck of the woods because none of the verses are heard enough.

The fourth album Basie / Bennett, is a big disappointment given the talent on display; only three of the 11 tracks are over three minutes and three of them can’t even reach two minutes. If you add the terrible phrasing on I’ve Grown Accustomed To Her Face (as the lyrics write reads “… More like a habit that you can always break… Singing” … a little bit like a habit that you can always pick up and yet … “) it’s an album unlikely to take up much space on either man’s CV.

Basie is back for the fifth and final album, In person!, in which the most interesting elements are Firefly, a number that Cy Coleman and Carolyn Leigh wrote during the audition to write the score for Gypsy (they didn’t get the job but Bennett got a recording of the song, which then went off the radar) and Growing Pains, from the sheet music of A tree grows in Brooklyn by Arthur Schwartz and Dorothy Fields.

A final plus: the little-known and rarely heard verse of There Will Never Be Another You by Harry Warren. One last perplexity: the two-time reading duo with Candido Camera’s congas on Old Man River.

Discography
CD1: [Cloud 7] (1) I fall in love too easily; My baby is just worried about me; My heart tells me; Old Devil Moon; Love letters; my reverie; Give me the simple life; While the music is playing; I can’t believe you’re in love with me; Damn that dream; [The Beat Of My Heart] (2) Let’s start; Broadway lullaby; Let there be love; Love to sell; Army combat song; Crazy rhythm; The beating of my heart; So beats my heart for you; Blues in the night; The lazy afternoon; Let’s face the music and the dance; Just one of those things; [Hometown, My Town] (3) Skyscraper Blues; Serenade Penthouse; Alone (79.21)
CD2: [Hometown, My Town] I cover the seafront; Love is here to stay; The party is over ; [Basie/Bennett] (4) Life is a song; With a lot of money and you; Jeepers Creepers; Are you having fun? Everything is fine; Hit the group; Chicago; I got used to his face; Poor rich little girl; Growing pains; I guess I’ll have to change my plan; [In Person!] (5) Just in time; When I fall in love; Take a chance on love; Without a song; fascinating rhythm; Solitude; pennies from heaven; Lost in the stars; Firefly; There will never be another you; Broadway lullaby; Old Man River (72.06)
Bennett (v) with:
(1) Al Cohn, César DiMauro (ts); Dave Schildkraut (as); Charles Panely

Melanie O’Reilly & Trio – Jazz on a Summer’s Evening: a tribute to Anita O’Day

Juneau Jazz & Classics announces the program of the Fall Festival