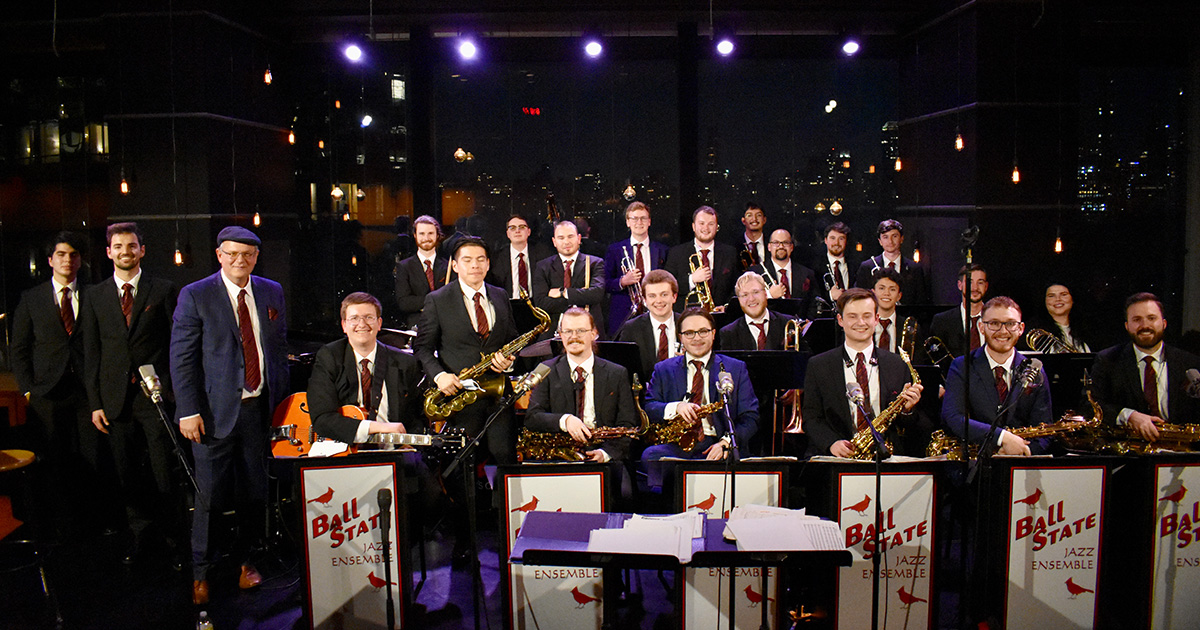 For a baseball player, Yankee Stadium is considered sacred ground. For those who love the world’s most famous paintings, a trip to the Louvre in Paris can fulfill a lifetime’s ambition. And for a jazz musician, hitting the stage at New York’s Lincoln Center’s Dizzy’s Club could be like finding the Holy Grail.

On March 14, Ball State’s renowned Jazz Ensemble 1, the flagship of the University’s jazz program, had the unforgettable experience of performing at Dizzy’s.

Mark Buselli, professor of musical interpretation (jazz studies) and director of jazz ensembles took Jazz Ensemble 1 to perform at the National Theater of Costa Rica (2019), the famous Montreux Jazz Festival in Switzerland (2017) and at several prominent jazz venues and festivals across Europe and Asia during his 15 years with Ball State. He says playing at Dizzy’s is “the pinnacle”.

“A lot of jazz musicians will only dream of playing there,” Buselli said. “The other places we went to are very prestigious, but we had to audition to be accepted. We at Dizzy were invited to play, and it’s something we will always cherish. The history of jazz at Dizzy’s can’t be found anywhere else.

How did it happen

The invitation to play at Dizzy’s is tied to Ball State’s centennial celebration in 2018.

As part of the year-long festivities, jazz great Dr. Wynton Marsalis was among several musical and theatrical acts to perform on campus. The contract called for Dr. Marsalis to stay in Muncie an additional day to conduct clinics for Ball State jazz bands.

And it turns out that Dr. Marsalis was, and continues to be, the chief and artistic director of Dizzy’s.

“I asked our children to play some student compositions for Wynton, as well as some Duke Ellington numbers since I knew he was one of his favorites,” recalls Mr. Buselli. “Wynton was impressed with our kids and told me bluntly, ‘We have to get these people to Dizzy’s. And the rest, as they say, is history.”

No student left behind

The invitation was extended for Spring 2020, but like so many other venues, Dizzy’s was closed due to the COVID-19 pandemic for several months. The delay caused a problem for Mr. Buselli as seven of the ensemble members who performed for Dr. Marsalis on campus in 2018 had graduated.

“Granted, those seven kids deserved to go, but it also meant that at least seven members of the current ensemble would likely have to stay behind due to cost and logistical issues,” Buselli said. “Or at least that’s what I thought.”

Fortunately, the School of Music came to the rescue and insisted that resources be found so that all current members of the ensemble could make the trip.

“I will always be grateful to the University and the School of Music for that,” Buselli said. “I lay up many nights dreading telling one of my kids that he couldn’t come on stage at Dizzy’s.”

Cardinals in the Big Apple

“We were very grateful to have Akili join us,” Mr. Buselli said. “She is a real rising star and another example of our collaboration with the Department of Theater and Dance. They have provided us with some truly fantastic singers over the years.

Some prominent cardinals were also the focus of the audience, including the provost, Dr. Susana Rivera-Mills; Dr. Seth Beckman, Dean of the College of Fine Arts and Professor of Music; and Kayla Davion, a 2017 music and theater graduate and rising Broadway star.

“We were thrilled to look out in the audience and see so much support from the Ball State community,” Mr. Buselli said. “These are people who have a million other things to do but have chosen to share this moment in history with us.”

The thrill of a lifetime

The Indianapolis native had known Dizzy since middle school and was honored to have one of his original jazz compositions included in the sets.

“If you really want to play jazz, Dizzy’s has been on your radar screen for a long time,” Mr. Balseca said. “I often dreamed of being on this stage, but I never really thought it could happen. So many very talented musicians will never get to

experience what we did, and there’s just no way to adequately express my thanks to everyone at Ball State who helped make this a reality.

Todd Stoll, jazz trumpeter and vice president of education at Jazz at Lincoln Center, remembers Dr. Marsalis’ enthusiasm for the ensemble after returning from his visit to Ball State.

“Ball State Jazz were invited to play at Dizzy’s after a workshop with Wynton,” Stoll said. “He was like, ‘Man, that band in Indiana was swinging. Let’s find them a date.

As for the show itself, Mr. Stoll was very impressed.

“The show was fantastic, a mix of important repertoire from composers like Duke Ellington, as well as the director’s originals and superb student arrangements,” Stoll said. “Ball State came to the Big Apple and warned all big city schools: jazz is booming in the Midwest.”