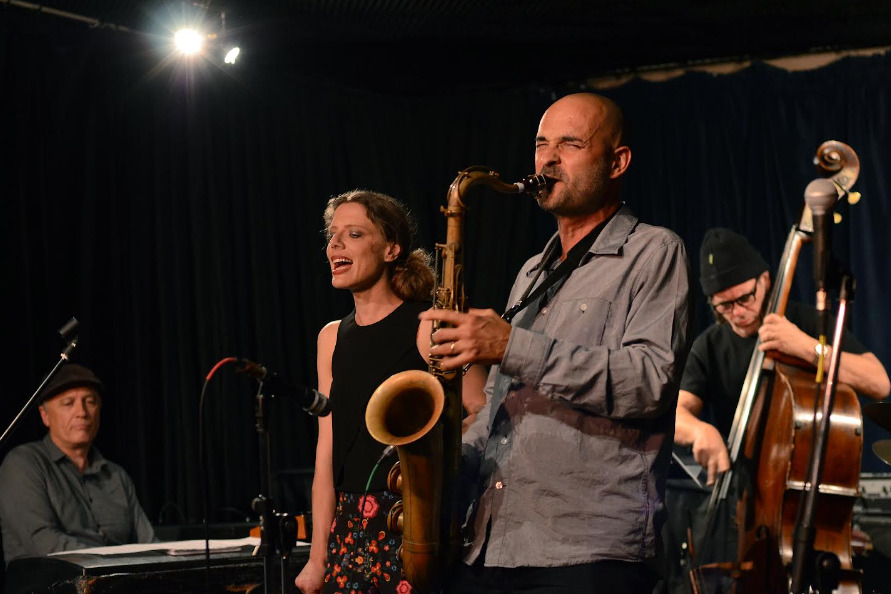 The Energy of Jazz (SIMA)

Australian saxophonist Richard Maegraith, back from Berlin, Germany, where he has been based since 2015, opened this concert with his supergroup Galaxstare. Originally formed in 2007, they played music from their third album Listening With Your Eyes, which was recorded in November 2018 but has just been released. In many ways an all-star band, it featured Maegraith (tenor saxophone, didgeridoo, bass clarinet, flute, chimes), Kristin Berardi (vocals), Gary Daley (keyboards), Jonathan Zwartz (double bass) and Tim Firth (drums) ) with guest hip-hop artist Monks, formerly known as 21monks (spoken word).

This performance was a mixed blessing. It might have been seen as a triumphant performance by a returning expatriate conductor – and in many ways it was – but in deconstructing what I heard I draw attention to some aspects of performance that may help explain what was happening. Specifically, I re-raise the old questions of sound balance and the role of the sound technician.

On the plus side, there were two accomplished artists on the bill: Richard Maegraith, an all-around splendid saxophonist whose brilliant solos throughout the performance were energizing; and Kristin Berardi, arguably the finest jazz singer this country has produced since Kerrie Biddell, who died in 2014. Berardi sang lyrics to Maegraith’s compositions and wordless lines over written melodies, improvised scat lines from priceless complexity and ingenious counterpoint lines from hip-hop artist Monks. Gifted with a beautiful voice, every time she took the lead, the music soared. His performance was a real tour de force, and I will remember it for a long time.

With Maegraith and Berardi, their sound was as clear as a bell. I wish I could say the same for the rhythm section. First, Gary Daley’s Fender Rhodes piano sound was irritatingly back in the sound mix, with little presence unless drummer Tim Firth lowered his volume level, which rarely happened. Secondly, Jonathan Zwartz tends to favor a fatter double bass sound on stage than comparable bass players. For this reason, the sound technician must ensure that his sound is transmitted to the audience at a moderate volume level. Unfortunately, this aid was not received. Instead, Zwartz’s sound boomed and lacked definition, dominating the sound mix. This made me wonder if the sound technician had been able to hear the Galaxstare album before this concert. The superb sonic balance of the rhythm section would have been something to aim for.

The musical genre played here has long been known, perhaps insufficiently, as jazz/rock fusion, although I hasten to add that Galaxstare’s music is a very advanced example of the genre, full of interest . Galaxstare took advantage of the strengths of this genre, but also shared one of its shortcomings – the full battery at sforzando, characteristic of rock music, rather than the more flexible, light and open playing that characterizes the jazz part of the spectrum. While Hamish Stuart’s drumming with the next band was characterized by light and shadow, Firth’s brilliant playing, in the jazz/rock context, was relentlessly strong.

First Nations artist Monks provided spoken word lyrics for four of Maegraith’s compositions. Although I know little about hip-hop, I understand that it pits poetry against a rhythmic groove. At the Melbourne International Jazz Festival in 2018, I was very much in love with a supreme example of the genre in the form of rap artist Kassa Overall, performing with American Terri Lyne Carrington’s Social Science band. Performing at Jazzlab, Overall’s solos rocked the house.

Monks had a lot of words to cram into each bar – so many words, in fact, that I felt he had trouble matching the rhythm section groove. Dozens of words flashed by as the listener struggled to understand them. The composition Word in particular, which delivered a strong Christian message, had so many words to articulate that I would challenge any listener to understand them without reading those words simultaneously. Yet a generous audience responded warmly to the First Nations messages articulated by the monks, especially in its opening song. Those who were here first.

The second group, the Sandy Evans/Andrew Robson Quartet, with two frontline saxophonists (Evans on tenor and soprano, and Robson on alto and baritone, and occasionally on recorder) presented a much simpler proposition for everyone, including the sound technician and this reviewer. With no chord instruments to complicate the sound, the rhythm section relied on two brilliant musicians: double bassist Brett Hirst and drummer Hamish Stuart, the latter well known for keeping the sound open and playing at a moderate volume level.

This quartet’s full performance relied on catchy, melodic compositions by co-leaders Evans and Robson, which sounded extremely hip; long, steamy, expressive solos from each of them, which were mesmerizing; and the very adventurous rhythmic forays of Stuart and Hirst. It was quite obvious that once the improvisations started, the music could go in any direction – usually into high energy, and sometimes into the chaos of free jazz – but, no matter how bad the music was pushed, it would be re-stabilized. and the ship oddly righted by empathy and intuition. Such are the talents of musicians at this level of excellence.

Sonically, the set started with Hirst’s bass sound lacking in definition, somewhat reminiscent of Zwartz’s problem with the volume level in the previous set. During the third issue however, Evans’ composition The current tide, Hirst took a long unaccompanied solo that ended with him reducing his volume to a whisper. I guess during this solo the sound tech fiddled with the relevant knobs and got the bass sound right. From then on, Hirst’s sound was flawless, and I couldn’t fault the quartet’s overall sound for the rest of the set. It was simply superb.

This concert had a lot going for it, and the credit goes to the 10 musicians who made it such a big success. I will remember it above all for the incomparable play of the three saxophonists Maegraith, Evans and Robson, and the magnificent singing of Berardi.

How well does your state protect payday loan borrowers?

Tempe Jazz Series Merges With Scottsdale Venue | get out