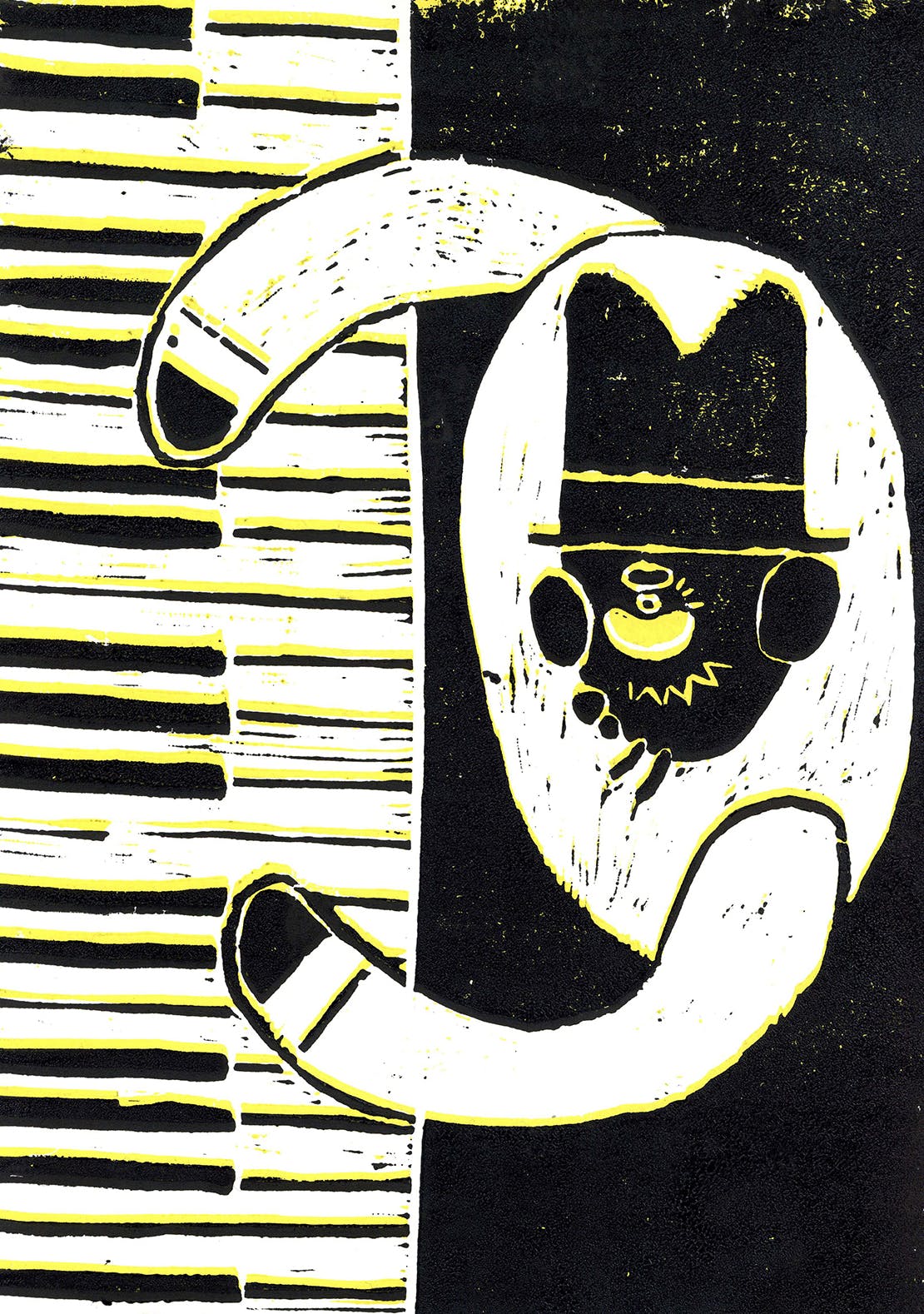 Soak up the jazz-infused art of Joy Yamusangie

Joy Yamusangie always wanted to play the saxophone as a child, but the visual arts turned out to be a more accessible activity. “My parents were buying a pack of printer paper and I was pretty much ready,” the London-based artist tells us. So it was into art that they eventually channeled their efforts, making comics and animation for their siblings, and then earning a degree in illustration from the University of Portsmouth. Their practice has since expanded to include film and sculpture, alongside a strong mix of illustrations, paintings and drawings, which tend to share a recognizable combination of blocky shapes, thick lines, vivid tones and an intriguing cast of characters.

The visual arts provided a career for Yamusangie, but music remained a constant undercurrent. Their first illustration job was creating posters for club nights in Hackney and musical soundtracks during their time making art. “It inspires me to start creating, the songs show me through the creative failures and successes and sometimes capture the energy of the painting better than I could explain,” they tell us.

No genre sets Yamusangie’s ideas in motion more than jazz – a foundation of their Now Gallery exhibition, Feeling Good, which sets their evocative works in an imaginary club. The name recalls the classic number sung by Nina Simone, which features in the energizing playlist compiled by Yamusangie, giving a sense of the music behind this body of work. Visitors to the exhibition space can also expect a jazz score and can even jingle the keys themselves.

Yamusangie began making the artwork for the exhibition the same year the pandemic took hold. During the lockdown, they found a daily ritual in engraving, with results displayed solo for the first time. Yamusangie also took advantage of the confinement to revisit his childhood dream of learning the saxophone: “It has been a nice break from my very visual world and I can just close my eyes and experiment and paint with sound. It’s new to me and I love it.

But above all, the confinement was a personally significant period during which the artist was able to reflect on his identity. It was the first time they had experienced the “gender euphoria” that others were talking about but had never resonated before. “I felt good and started imagining this space where other male trans people could also be and feel good, and for me a space that felt like a jazz club,” Yamunsangie says of the genesis. of the exhibition. Two personalities were particularly influential: Joss Moody, the fictional main character in Jackie Kay’s novel Trumpet, and Billy Tipton, the real-life musician who inspired the character. Jazz provided a home for both, and Yamusangie wanted to recreate that feeling through work and space.

Yamusangie cites the Bauhaus movement as a key influence on their work, although they have translated it into a distinct visual language of their own. “I am drawn to the angles, the lines, the balanced composition and of course the color palette. It’s simple but I appreciate it. Sometimes I think I need nothing more than red, yellow, blue and black. Blue was squarely front and center on Yamusangie’s joint show with Ronan Mckenzie in 2020, with the duo evoking water deity Mami Wata together through photography, wall hangings, film and a bespoke score.

In Feeling Good, many works are reduced to three primary colors in accordance with the principles of sapologie, a Congolese clothing philosophy followed by elegantly dressed sappers. According to Sapology, Yamusangie explains, “When dressing up, you should not exceed more than three colors. And just like in Sapology, you choose colors carefully based on how you feel or what message you want to convey. So I thought about what these colors mean to me and I chose black (power and drama), yellow (wealth, jealousy and happiness) and red (romance, violence and confidence) and they are all moods or feelings that may arise within a club. ”

Aside from the heartaches and fights that often occur after dark, there is a sense of togetherness in many of the moments that Yamusangie portrays in the exhibit – candid conversations about life and self-love. , clubgoers who connect with each other either emotionally or physically, their clothes blending into one seamless silhouette.

As for who would come in through the door if Feeling Good was a real jazz club? “I would dream of Nina Simone playing a few nights. Perhaps you will find Stormé DeLarverie at the door welcoming people to the club. And in these dreams, I hope some people who inspire me like Campbell X and Cheryl Dunye have an odd night.

Joy Yamusangie: Feeling Good is on display at the Now Gallery in London until June 5; nowgallery.co.uk; joyyamusangie.com