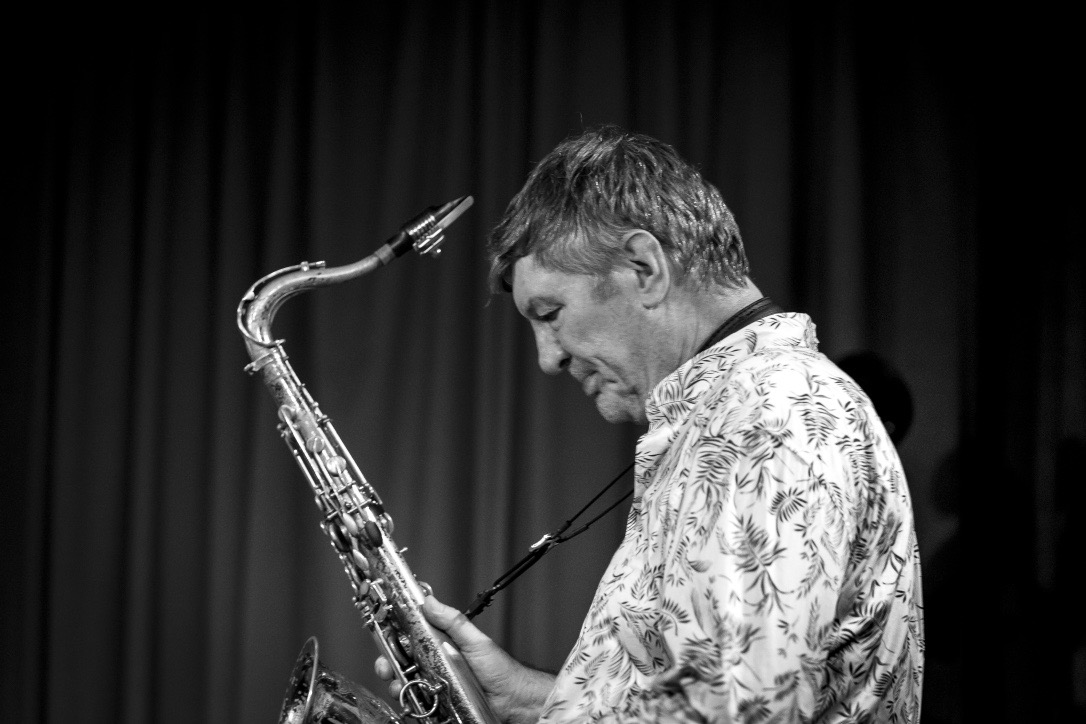 Yes, improvisation is by nature the most unpredictable of professions. Charles Mingus said “trying to play the truth about who I am” was difficult because he was changing all the time. Pianist Keith Jarrett complained about the pressure of being both a ventriloquist and a model.

There were no such barriers here. Stan Sulzmann’s quartet played at an outlying festival venue, the Assembly House, overlooking the main railway tracks in Kentish Town. He played two absolutely unforgettable sets and gave a very true account of who he was and who he is. Sulzmann will turn 74 in a few days and was born in the nearby town of Islington. After the saxophonist played the first piece, “Conception” by George Shearing, he thought that not only was his father an accordionist, but that two very great jazz pianists from south London had also played the accordion at adolescence: Shearing himself, and also Stan Tracey. Sulzmann also seemed to tell us his life story through his playing. We heard tracks from two of the greats he was very close to, Kenny Wheeler (“Old Times”) and John Taylor (“Ambleside”). And when he played Johnny Green’s “Body and Soul,” it was the polar opposite of Coleman Hawkins’ carved granite. Stan’s voice is pure lyricism, arabesque, with another teasing counter-melody lurking in the wings ready to make its entrance.

Can you judge the probable musical quality of a concert by the number of cases of instruments in the hall? Maybe. This marvelous concert had attracted an audience of young saxophonists. As always, they were able to admire the total balance of Sulzmann’s sonic production on the instrument. His tone is never forced; nothing stands in the way of music. His quartet consisted of one of London’s most fluent young improvising pianists, Will Barry, reduced to playing a portable electric piano, but still communicating joy. Loyal bassist Steve Watts still plays unerringly, courteously and with endless subtlety and imagination, and we were also introduced to Kai MacRae, a young drummer with a fine touch and a super sense of texture and time.

It was one of the most intimate concerts of the festival, but really great. Hopefully the 2023 Festival will bring Stan Sulzmann to a more central location to celebrate his 75th birthday. He deserves it. He is an absolutely inescapable figure in British jazz, and there will be no shortage of musicians from several younger generations who will want to line up to show their respect, gratitude and admiration.

The gigs I mention here are a very personal selection, and mostly taken from the regular London club schedule. I did this partly because the chances of hearing something special – like the Sulzmann concert – are higher, but also for the practical reason that the writing team at London Jazz News, which I edit, has produced over 20 reviews (see link below). We provide the most comprehensive coverage of the festival by a country mile. We’ve covered many of the biggest gigs, including the Festival’s biggest gig, primarily a series of DJ sets at Printworks London that sold 6,000 tickets. I confess, I shamelessly followed my enthusiasms.One of the highlights was the realization of a very audacious idea by courageous Milan-born, London-based singer Francesca Confortini (pictured above by Jonathan Cuff). Confortini has assembled her own songbook, songs by what she calls “contemporary female millennial composers.” Confortini shows well-placed belief in Esperanza Spalding’s songs (“I Know You Know”) from the bassist’s breakthrough 2008 album Hope, or 2019’s Jazzmeia Horn’s “Free Your Mind,” and she brings such energy, vibrancy, and musicality to the task of conducting that it all works. Getting the rights sorted will probably be tricky, but this deserves to be an album.

I also heard two other singers. I headed to the 606 Club to witness the phenomenal talent of singer Anita Wardell. She’s been missing from London for the past four years while working as a teacher in Adelaide, but now she’s given it up and is back here. Betty Carter’s celebration of Wardell was a joy, and she has the skills and the jazz chops to do it. The room was filled with other singers, all apparently impressed. And to anyone who comes out with the lazy trope that they don’t like scat singing, there’s a simple answer: if there’s one current singer who can change her mind, it’s Anita Wardell.

Catherine Russell performed the last two of the 50 concerts that Pizza Express Live has held at their three venues. Russell is jazz royalty and carries a deep sense of the tradition of his father, Panama-born Luis Russell, who was Louis Armstrong’s bandleader. His connection to the music of the 1920s and 1930s is profound. His days as a backing vocalist for Donald Fagen/Steely Dan and for David Bowie were replaced by a deep exploration of early jazz. A solid group too.

Harpist Edmar Castaneda, who gave a duo concert at Wigmore Hall with the Geneva harmonica genius Grégoire Maret (pictured above by Ralf Dombrowski), once had another duet with pianist Hiromi. They used to give the kind of gig where so many notes were played that – as the late great Eddie Harvey would say – they would need someone to sweep them away afterwards. His duet with Maret is very different from the previous one. Yes, Maret is a virtuoso, but he also has a way of shaping the melody of a track like Charlie Haden’s “Our Spanish Love Song” that could melt any heart. It definitely affects mine. These days, Castaneda performs facing the audience rather than sideways, and the flicker of emotions on his face as he performs is totally compelling. The Maret/Castaneda duo has a fascinating history. Since there was no published schedule, it was a shame that the concert announcer didn’t bother to do any homework other than learning how to pronounce the names correctly.

Announcements and context were once again lacking at the Chucho Valdes concert (pictured above by John Watson) during the closing night of the festival (a trend here?). The band assembled to play Valdes’ new work “Creacion” is packed with stars such as percussionist Roberto Vizcaino Jr and drummer Dafnis Prieto, and Valdes’ medley flowing and dreamy through around two dozen jazz standards was mesmerizing. We just needed more information…

The Vortex and Hans Koller, head of jazz at Trinity Laban, had put together a wonderful project. They had taken the initiative to invite the great Mike Gibbs and play four different programs from his extensive catalog for jazz orchestra on the occasion of his 85th birthday. While in sport the idea of ​​bringing in “ringers” to strengthen the team is prohibited, here the combination of experienced professionals – Tom Challenger, Julian Siegel, Tom Walsh, Gene Calderazzo, Lewis Wright and Koller himself – worked brilliantly. These musicians turned a student jazz band into a band that could do justice to Gibbs’ chemistry and variety as an arranger. Is there anyone who can write as well in as many idioms as Mike Gibbs? Josephine Davies directed and brought it all together brilliantly.

Manchester-born pianist Julie Sassoon had traveled from Berlin and gave a rare solo show in London on a very fine piano at Theatro Technis on Crowndale Road in Camden. She plays intensely with long arcs and structures, and the audience was slow to settle in.

There are some interesting new developments. Jazz festivals inevitably diversify to attract more young people. So this year the highest number of tickets sold (6,000) for a single event was on the final Saturday at Printworks London, a program dominated by DJ sets rather than live music. The economically inconvenient truth must, somehow, come out: for live music, and for improvised music in particular – surely – small isn’t just beautiful, it’s essential.