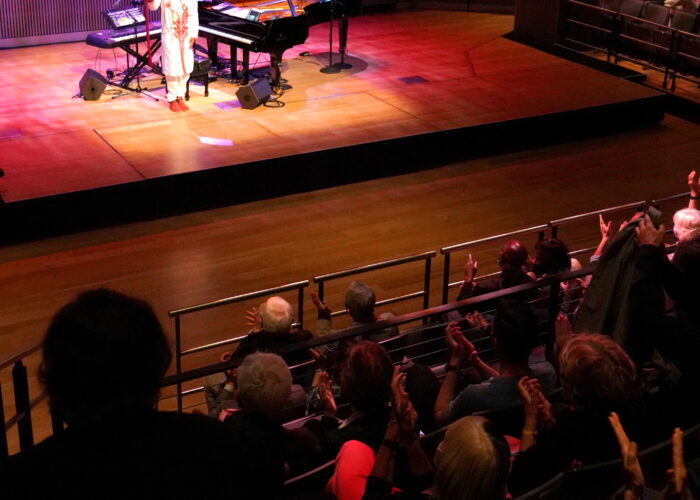 There was a feeling of excitement for the first day of school on Tuesday, June 1, as over 100 music lovers lined up in front of the SFJazz Center, 6 feet apart, for the first concert of the room in front of an in-person audience since the pandemic closed the site in mid-March 2020.

SFJazz founder and executive director Randall Kline greeted the guests (masked, like everyone else allowed in the building) as they lit up their smartphones’ screens to be scanned for what would be an exhilarating solo concert from the Cuban pianist, keyboardist and percussionist Omar Sosa.

While SFJazz maintained a presence throughout the lockdown – its lights remained on, its digital marquee ticker continued to operate, and its lobby video monitors continued to operate as its weekly Fridays at Five digital series maintained the audience engaged online – Tuesday night’s concert was a moment to remember. Between the standing ovations and the moments when Sosa made the crowd smack the crowd and then clap, it was a kinetic interactive experience that couldn’t be duplicated via streaming video (although the concert was recorded and will be available to stream online. June 17 and 20).

But there were still reminders that the performance of Sosa, who kicked off this year’s San Francisco Jazz Festival, was set in the midst of a pandemic. Only 176 SFJazz members were allowed into the 700-seat auditorium for the show, with proof of full COVID-19 vaccination. Spectators also had to remain masked throughout the evening. No food, drink or bottled water was allowed inside the site, and there was no merchandise, ticket sales, or member registration activity.

The SFJazz festival goes virtual for the second year in a row, this time with a twist

There was also no loitering in the lobby. Guests were ordered to proceed directly to the second floor, then descend to the center of the main section and accommodate the seats on the ground floor. Kline spoke briefly at the start of the night, stating that the concert – the first for a public audience in over a year – resembled the opening night of the SFJazz Center in January 2013.

The show itself was proof of that, since it was conceived just a week ago. Kline revealed that while he and Sosa were on a video call, he realized from the background that Sosa was in the Oakland Hills and not at his home in Barcelona. When he learned that the pianist would not be leaving the Bay Area until Wednesday, June 2, the idea for this solo concert was born.

Although SFJazz’s Miner Auditorium has previously hosted unaccompanied instrumentalists such as guitarist Bill Frisell, bassist Dave Holland, and pianist Marcus Roberts, Sosa’s music and style was perfect for the occasion, which Sosa says. , was like the “reopening of the temple” that is the SFJazz Center. .

In addition to playing on a Yamaha grand piano, Sosa brought a pair of keyboards, two digital tablets, hand percussion and pedal effects. He had bells strapped around his left ankle and a shaker-like instrument around his right ankle, allowing him to provide his own rhythm when shaking his leg or stamping his foot.

Sosa improvised 10 acts based on themes such as â€œconversationsâ€, â€œblessingsâ€ and â€œshare the momentâ€. He mixed percussion sequences and string pads with his piano and keyboard playing during his 90-minute set, generally propelling a sense of movement and always projecting a sense of joy. Lyrics and recorded vocals were added for some pieces, as were his lyrics without words and his dances on the stage.

â€œIt was just the right way to come back and find some energy,â€ said Greg Landau, a resident of Alameda, a music producer who has worked with Sosa.

â€œThe community aspect was very special,â€ added Linda Lucero, a San Francisco resident who is the executive and artistic director of the Yerba Buena Gardens Festival. â€œHearing Omar and being there with everyone was perfect.â€

As the crowd dispersed, members of the public were led row by row through the first floor exit and straight into the street. Due to security restrictions, there was little time in the lobby afterwards, a concert experience that may have been awkward before, but is now missed by regulars. But as Sosa wisely observed midway through his performance: â€œSomething has changed, but nothing has changed. “

The San Francisco Jazz Festival will resume on Thursday, June 3 with a virtual performance in Havana by pianist Harold Lopez-Nussa and his band – the first time SFJazz has presented a performance originating outside the United States – along with eight more. pre-recorded concerts and the US premiere of the documentary film, “Music in Monk Time: A Retrospective Tribute to Thelonious Sphere Monk,” June 10. Another indoor concert for festival-goers is scheduled for June 17.

The San Francisco Jazz Festival presents Omar Sosa: Available to stream to SFJazz members at 7 p.m. on June 17, with a reminder broadcast at 6 p.m. on June 20. Subscriptions start at $ 5 per month. www.sfjazz.org