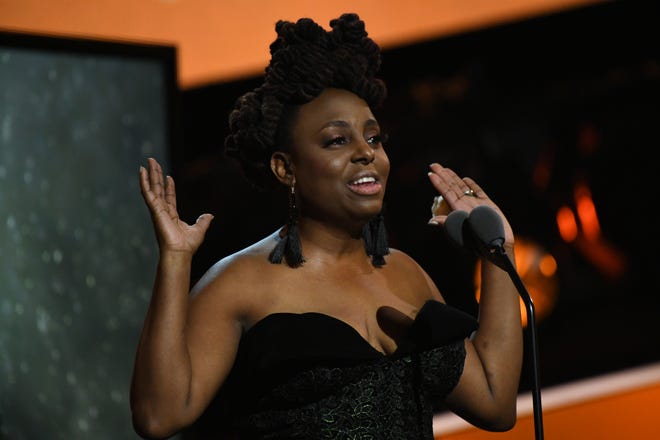 The 10th Annual Palm Springs Women’s Jazz Festival will make its triumphant return this weekend after having to switch to an online platform during the COVID-19 pandemic, and an even bigger celebration is planned than in previous years.

The festival will take place Friday through Sunday at the Palm Springs Convention Center and will feature a number of acclaimed female artists, including Grammy Award-winning Ledisi, Grammy-nominated Nnenna Freelon and Cyrille Aimée, and Lea DeLaria. (also known for her work on the Netflix series “Orange is the New Black”).

Organized by the nonprofit Palm Springs Women’s Jazz and Blues Association, the festival was co-founded by Sweet Baby Jai, who is also the artistic director and a famous performer herself. Media director Marlene Cohen said the event was always meant to celebrate female musicians who don’t normally get the spotlight.

“Most touring bands, if they’re lucky, might have one or two female musicians, but often they’ll be backing vocals. But we have percussionists, pianists, guitarists, bass players, violinists, saxophonists. You think of an instrument, they’re all women and they’re amazing,” Cohen said.

“It gives them a showcase to show that they can weigh as much as any male jazz player,” she added.

This year is the first time since 2019 that the festival will take place in person. Since then, the event has seen exciting growth, Cohen said — and not just locally, but across the country and around the world.

In 2019, between 400 and 500 spectators would go to a concert. This time around at the Palm Springs Convention Center, Ledisi’s Saturday night performance sold out nearly 1,000 seats, and a second performance of Divas of the Desert had to be added because demand was so high, said Cohen.

The festival was originally scheduled to take place outside the community amphitheater in Cathedral City, but Cohen said it “didn’t work out” and organizers had to find another venue.

The event also captured the attention of people outside of the Coachella Valley. The two main markets from which people visit the festival website are New York and South Africa.

“This is the future of the Palm Springs Women’s Jazz Festival. We are growing to be a major West Coast jazz festival,” Cohen said. “We are celebrating our 10th anniversary and are delighted that it has become a formidable contender for an international jazz festival.”

Although demand has been high for the upcoming weekend festivities, tickets are still available for shows and other events.

Freelon, Aimée and DeLaria will be performing a tribute to The Great American Songbook on Friday night, which Cohen says is “going to be fabulous.”

Freelon has toured the world with many great jazz artists, including Ray Charles, Ellis Marsalis and Al Jarreau, and received numerous awards. In addition to her Friday night performance, she will also be honored at this year’s Jazz Master Award, which takes place Thursday from 4-6 p.m. at the Margaritaville Resort Palm Springs.

Although many know DeLaria for her acting career, she has also performed live music on some of the world’s most prestigious stages, including Carnegie Hall, Lincoln Center, Hollywood Bowl, Royal Albert Hall and the Opera House. Sidney.

The second Desert Divas show at 2:30 p.m. Sunday has seats available. The concert is a “tribute to all the jazz singers around the world who work in the clubs every night, keeping jazz alive”, according to the website. The featured desert divas are Hope Diamond, Gennine Francis, Melba Miller, Melba Miller, Patrice Morris, Keisha D, Chris Bennett, Yve Evans and Cynthia Thomas.

Tickets can be purchased at palmspringswomensjazzfestival.org.

Each day of the festival will also include an art fair, open to the public, from 3 p.m. Friday and Saturday and 10 a.m. Sunday, until the end of the day’s concerts. Everything from paintings to jewelry by female artists will be available for purchase.

“The main thing is fun, and that’s exactly what we plan for,” Cohen said.

Ema Sasic covers entertainment and health in the Coachella Valley. Contact her at [email protected] or on Twitter @ema_sasic.