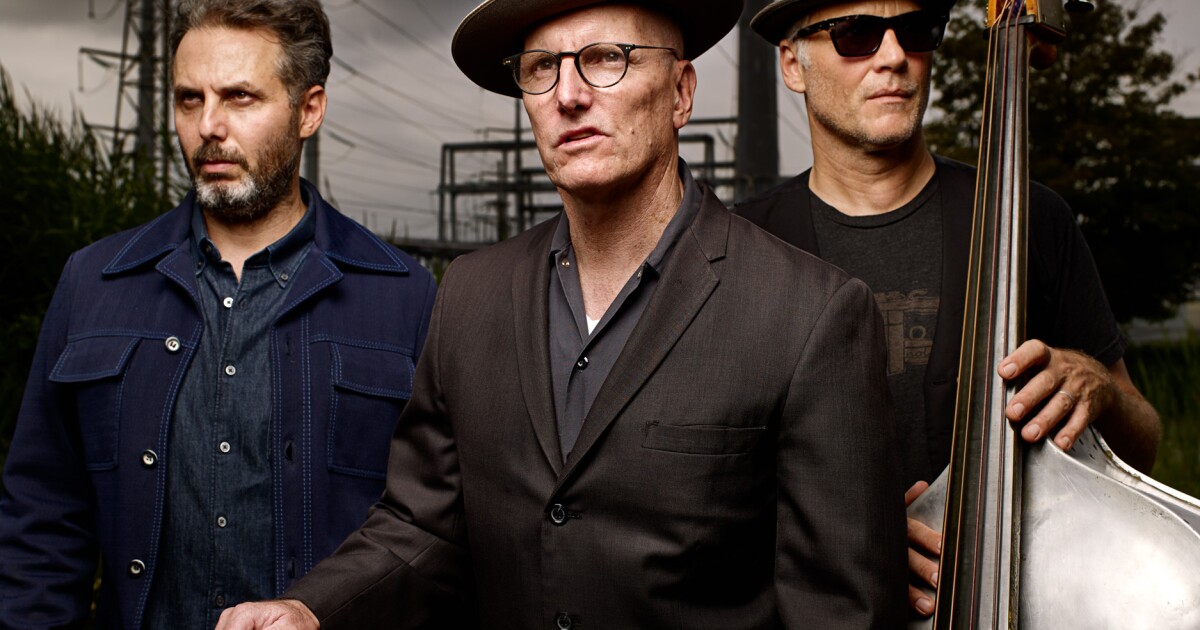 The big shows at the CGI Rochester International Jazz Festival at Parcel 5 downtown were hard to miss, with bass echoing from the surrounding buildings. The Booker T Soul Review packed the spot Thursday; music is comfort food for the soul.

But you have to open the clubs, like a squirrel shoving an acorn, to find a treat like New York’s Big Lazy.

“Don’t worry,” guitarist Steve Ulrich assured the packed house of the Montage Music Hall. “Everything will be alright.”

Ulrich and his trio, Big Lazy, were already deep into their first set Thursday by the time they arrived at this track, “Dear Trouble,” a brooding soundtrack of guitar, drums and bass.

As far as instrumental trios go, this one was dark. But it was OK. An intriguing soundtrack, with Ulrich turning up the reverb and echo effects on his guitar to 10. Crime surfing.

Sinister. But it was OK. Unsurprisingly, these guys are big fans of Tom Waits’ junkyard mentality. “Highway twang”, Ulrich called him. Driving music, with the top down. For special effects, Big Lazy drifted no further than bowed bass on a song, or Ulrich playing lap-slide guitar (more properly pronounced “gee-tar”).

Dark movie. Ulrich composes soundtracks; he did a few for HBO. They released John Lennon’s “Girl,” although it wasn’t particularly recognizable because “we put it through our weird little filter,” Ulrich said. Indeed, “Girl” came out as a sort of tarantella lullaby, with a break for chaos in the middle. Similarly, Ulrich identified “Night Train” as “roadhouse blues”. Maybe it was the old Jimmy Forrest song, but… maybe not.

Yes, intrigue. But it was okay. “Spy music,” Ulrich suggested, setting up the story of how the longtime band had initially called themselves Lazyboy, until recliner manufacturers hit them with an order to stop. and abstain.

These are the kinds of artistic hurdles our musicians face today.

notes in black and white

If you remember dissecting a frog in high school biology class, that’s what we were looking for from the Hans Bilger group at the Little Theater. According to his biography, he had studied evolutionary biology at Yale and incorporated the sounds of nature – birds, bats and frogs – into his music.

Alongside Ivy Leaguer Bilger, it was a witty trio. The electric guitarist composes classical music. The drummer is a poet.

Bilger is originally from Brooklyn and now divides his time between New York and Austin, Texas. He said he came to the Rochester Jazz Festival several times over the years, seeing musicians such as drummer Brian Blade and pianist Cedar Walton.

Usually playing acoustic guitar, Bilger would pick up a double bass when inspiration called for it. “Same Dream,” he said, was inspired by the pandemic, “when repetition seemed more frequent.” Bilger said he was inspired by a walk along the Columbia River Gorge in Oregon. It was inspired by a girl, Maria.

There was talk of a loonie. The inspiration of birds, bats and frogs seemed overplayed. Or maybe they just set the mood, like car trouble does for Tom Waits. Instead, dissect Bilger and what we find is a sensible independent hero.

It took Julia Nunes six years to go from strumming her ukulele as she sat on her bed at Skidmore College to sitting in a chair next to Conan O’Brien on the set of his ending talk show evening.

That long independent fan-fueled journey for the Fairport native, which began in 2007, comes home Friday, when she opens for The Bacon Brothers for a free show at Dr. Martin Luther King Jr. Memorial Park.

Nunes’ career has spanned seven albums of often original songs, driven by savvy use of social media. She first caught fire playing her uke in her dorm room, covering songs from familiar acts such as the Beatles and Destiny’s Child and posting them to YouTube. Some of its versions on the platform have exceeded one million views. His YouTube channel has over a quarter of a million subscribers.

Nunes previously opened for The Bacon Brothers, the acoustic project led by actor Kevin Bacon and his brother, Michael. She’s also opened for Ben Folds and Ben Kweller, performed twice at the Bonnaroo Music & Arts Festival, chatted with David Dye at NPR’s “World Café,” and toured England twice, including being interviewed on BBC1.

Nunes operates on a DIY philosophy. His loyal fanbase donated $77,888 via Kickstarter to fund his fourth album, “Settle Down,” which rose to No. 9 on Billboard’s Independent Albums chart. Subsequent YouTube campaigns grossing $134,403 and $71,025 supported his next two albums.

The videos have also been part of the Nunes story. “Stay Awake,” the song she performed on O’Brien’s show, shows her walking through an office, playing mischievous tricks on sleeping employees, then performing in front of a sleeping audience.

As her songs became less cute and more empowering, so did her videos. Now living in Los Angeles, Nunes identifies as queer, and the video for “No Sudden Moves” shows her lounging with another woman in a tub filled with glass beads. The video accompanying “Dear Ben” is awash in pink imagery – balloons, flowers, candy hearts – as it issues a sweet, heavy-handed warning about some overriding obscenity that Ben had better not try to romance her anymore. .

Davina & the Vagabonds joined the list of jazz festival bands who had to drop out due to travel, illness or COVID issues. The John Bailey Quintet performs in their place Friday at the Innovation Theater and Saturday at Montage, Grace Serene & The Superclean.