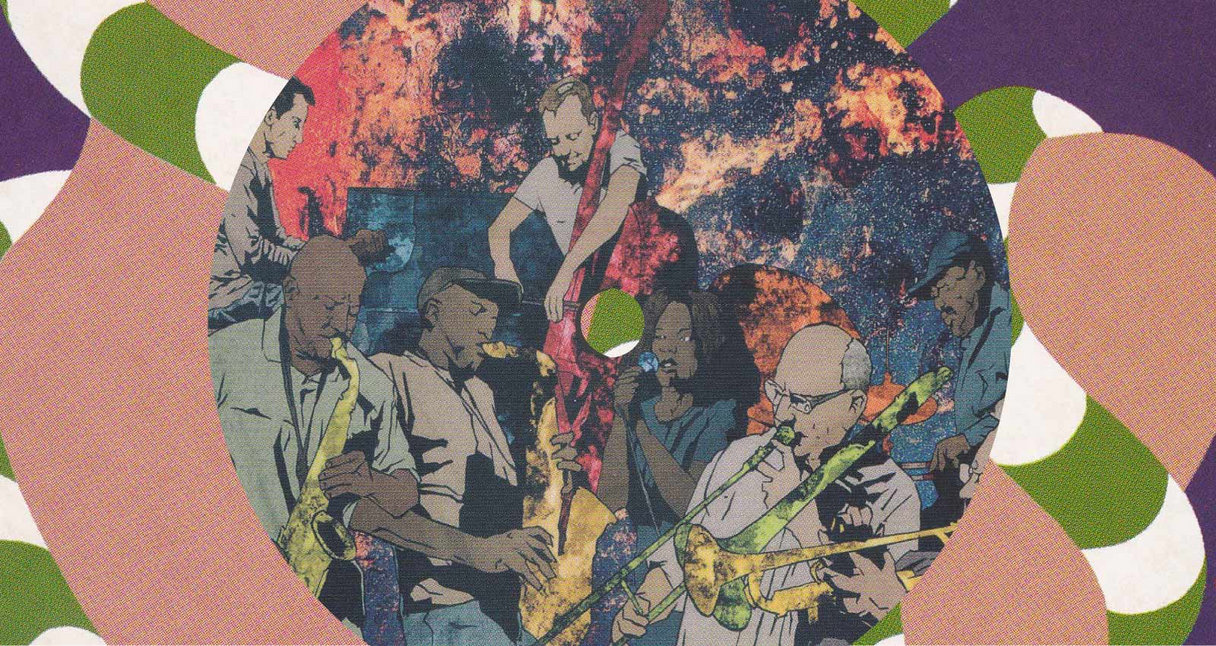 
There is a long history of musical conversation between jazz musicians from the UK and South Africa. In the 1970s, the OGUN label began documenting collaborations between South Africans in exile and some of the UK‘s most spirited free jazz players.

During apartheid, when jazz became the music of resistance in South Africa (with the most radical music recorded for the As-Shams label), many musicians fled to Europe. The exodus followed the 1960s Sharpeville Massacre where 69 protesters were gunned down during a peaceful demonstration by the Pan African Congress against the pass laws. â€œThe attempt to silence the state has taken many forms,â€ Gwen Ansell wrote of the post-Sharpeville crackdown in her seminal book. Soweto Blues: Jazz, popular and political music in South Africa. â€œThe closing of the last spaces of expression; the attempt to replace urban and politically conscious discourses with synthetic and tribal substitutes; creating distractions; and the push of a growing number of artists into exile.

Hugh Masekela, Miriam Makeba, Jonas Gwangwa and Abdullah Ibrahim are just a few of those leaving for Europe. They are soon joined by a Cape Town-based band whose musicians will have a profound effect on the British jazz scene. Blue notes, whose line-up included founder Chris McGregor on piano, Mongezi Feza on trumpet, Dudu Pukwana on alto saxophone, Nikele Moyake on tenor saxophone, Johnny Dyani on bass and Louis Moholo on drums, party for the Jazz Festival Antibes in France in 1964 before moving to London after a residency with Ronnie Scott.

Tony McGregor, brother of the late Chris McGregor (whose British / South African free jazz ensemble Brotherhood of Breath rocked the London scene when it was formed in 1969), explains migration: â€œI think one of the things with jazz it is that the people who play jazz are generally in themselves free people and they play free music. And it becomes very difficult to be free in a society where there are all these laws and regulations governing people’s lives.

Among those who settled in London was bassist, cellist and conductor Harry Miller. Arriving from Cape Town in the late 1960s, the Johannesburg-born bassist quickly immersed himself in the British free jazz and avant-garde scene, playing in the Brotherhood of Breath and a host of experimental ensembles including the jazz group prog rock by Keith Tippett, Centipede; the Mike Osborne-John Surman Quartet; Mike Westbrook Quartet; as well as with his South African exiled compatriot Dudu Phukwana on his killer album Dudu Phukwana and the “spears”. “

The musical ties and close friendships forged in the early 1970s gave Miller, his wife Hazel, and sound engineer Keith Beal the idea for a new label that would document this creative interaction between jazz players. British and South African. The name of this label was OGUN Records and it has released over 50 albums since its debut in 1974. Following the tragic death of Harry Miller in a car crash in 1983, Hazel Miller took over the label releasing at least three LPs each. year. Here is a dive into the OGUN catalog.

As a multiracial group, the Blue Notes had already experienced serious restrictions before the post-Sharpeville crackdown, says drummer Louis Moholo. â€œSometimes Chris McGregor had to play behind a curtain, and vice versa; I should be playing behind a curtain if we were hired by white cats. This LP, originally released by OGUN in 1995, is an important document of one of the group’s last performances in South Africa before flying to the Antibes festival and London. Recorded in the summer of 1964 during a concert in Durban, the album shows why the Blue Notes of the hard bop era were so revered in their homeland.

Although they were later to reunite in a more explosive form, by 1969 the members of the Blue Notes had split up. Chris McGregor’s band Brotherhood of Breath broke away from the group, bringing together members of his South African band with stalwarts from the British free jazz and avant-garde scene. Recorded at the Willisau Jazz Festival in September 1974, the LP is accompanied by sleeve notes by Val Wilmer, who wrote of the band: â€œThey literally turned the London jazz scene upside down, helping to create an exciting climate in which others young musicians could develop their own ideas. on musical freedom. As deep as it is swinging, the LP captures the power and glory of perhaps the greatest big band in free jazz. And what a group it was, with the South African players joined by a serious group of free and improvised British players including saxophonists Lol Coxhill and Evan Parker.

This multi-track solo recording by Harry Miller in London was originally released in 1974, shortly after the debut of Brotherhood of Breath. With Miller on double bass, flute and percussion, this is one of the great solo bass LPs in jazz. Miller’s double bass was a key component in Chris McGregor’s and Keith Tippett’s various bands for OGUN, just as Cecil McBee’s had been at Strata-East. There’s also something from the more famous McBee playing on the sad but booming title song. It is in these South African jazz inflections on numbers like “Homeboy” and the avant-garde abstractions of “Foregone Conclusion” that Miller stands out as one of the most unique double bassists in jazz.

Original member of the Mike Westbrook Concert Band, which recorded a number of UK free jazz records on the Deram label, alto saxophonist Mike Osborne first recorded with Harry Miller on his own 1970 LP, the hinterland, for the Turtle Records label. While touring with Brotherhood of Breath, he forged close ties with South African musicians, which led him to invite Louis Moholo and Harry Miller to form this trio. Recorded live at the Peanuts Club in Bishopsgate in the City of London in 1974, this OGUN reissue also features “Marcel’s Muse” recorded in 1977. Osborne would later appear with Harry Miller’s own band, Isipingo.

Following a steady decline in his health, Blue Notes trumpeter Mongezi Feza passed away in December 1975. In response to Feza’s memorial service, Chris McGregor, Dudu Pukwana, Johnny Dyani and Louis Moholo gathered in a London rehearsal hall for a spontaneous tribute to their friend. As the OGUN cover notes recall: “No discussion took place beforehand and nothing was said during the session, except through the music.” Released in 1976, the session consists of four intuitive and spiritually charged movements of 40 minutes.

After Harry Miller, of all the South African players to register for OGUN, Louis Moholo (now called Louis Moholo-Moholo) was the most prolific. In addition to his appearances on sessions of Blue Notes, Brotherhood of Breath and many other projects, he has released thirteen albums for the label; ranging from his 1978 LP Spirits rejoice to recordings of shows across South Africa in 1993 at the end of apartheid. This recording is from a 1979 show in the Netherlands. With Chris McGregor delayed, Reverend Frank Wright stepped in for this incendiary performance consisting of the 30 minute sonic assault of “Ancient Spirit” and “Contemporary Fire”.

â€œThe musical vocabulary of ‘Ovary Lodge’ developed from ‘hits’ as opposed to repetitionsâ€¦[T]there was no discussion between the members as to the musical direction, â€wrote the band’s conductor, Keith Tippett, the progressive jazz-rock pioneer in Bristol who died in 2020. He was best known for his 50-piece band, Centipede, who made their debut in 1970 with the LP September energy. The massive ensemble included his wife, singer Julie Driscoll, and Harry Miller, who joined Tippett for the second incarnation of Ovary Lodge. OGUN’s most out-of-the-box LP, this 1976 free improv set has pushed players to their limits. As Tippett recalled, “While playing and mixing, band members weren’t always sure who was playing what.”

In addition to releasing original Harry Miller Quintet LPs like the years 1978 In conference and 1977 Family affair by Isipingo, Miller’s swinging outfit, influenced by kwela, OGUN also delved deep into the archives. Hazel Miller’s cassette box included these two live sessions from 1973 and 1976. The first is a recording of a concert in London with a line-up of Harry Miller, Louis Moholo-Moholo, Chris McGregor, Mike Osborne and Nick Evans, and features the band in full flight on numbers like “Quandry”, driven by the rhythmic South African swing of many of Miller’s London recordings. The other four tracks come from a 1976 French festival that ends with the 17-minute epic “Eli’s Song” from LP Isipingo. Family affair.

Almost 40 years after its conception, OGUN continues to release new music. In 2017, Louis Moholo-Moholo’s powerful quartet of Jason Yarde (saxophone), Alexander Hawkins (piano) and John Edwards (bass) arrived at CafÃ© Oto in London with a special guest: Shabaka Hutchings, fresh from his travels. processors in South Africa. Anyone who was in the house that night could still tremble after that explosive and spiritually overwhelming session. The set begins with the â€œDikeledi Tsa Pheloâ€ lament, opening with a breathtaking interaction between Shabaka and Yarde before the two collide in a barrage of horns, fueled by the rhythm section of Edwards and Moholo- Moholo. You can almost feel this piece resonate as this eloquent and powerful quintet unleashes one of the the excellent live recorded jazz sessions. A spiritually charged uplift for the time and a tribute to the continuing connection between jazz musicians from South Africa and the UK.

Jazz album review: “Thank you Miles! Live at Vienna” – Of historical as well as musical value