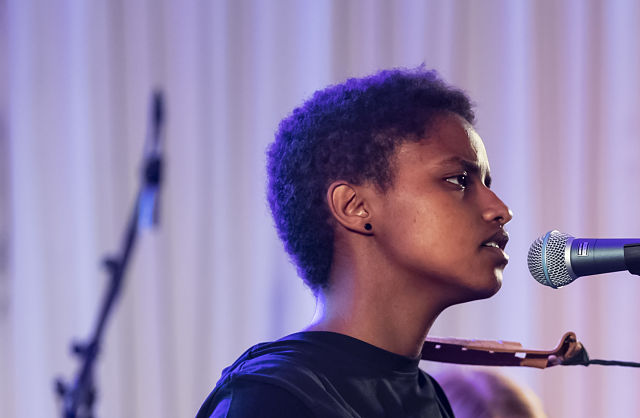 The Belgian singer-songwriter of Ethiopian origin Meskerem Mees is the winner of the Montreux Jazz Talent Award 2021. According to the organizers, the promising musician was “unanimously elected by a jury composed of both professional judges and members of the public “. (Montreux Jazz Festival)

The Montreux Jazz Talent Award 2021 was awarded to Belgian singer and songwriter Meskerem Mees. The 21-year-old artist performed at the Montreux Jazz Festival alongside eight other emerging talents selected by the Montreux Jazz Artists Foundation. Meskerem Mees was unanimously elected by a jury composed of both professional judges and members of the public, as well as a committee of artists including Yaron Herman, Anne Paceo, Shabaka Hutchings and Michael League.

The Montreux Jazz Artists Foundation (MJAF) has invited eight artists to perform at the Montreux Jazz Talent Awards, from July 2 to 17, 2021. Each candidate has been carefully selected by the booking team for their various interpretations of jazz and music drunk.

The eight artists performed at the 55th edition of the Montreux Jazz Festival in front of a jury made up of professional judges and members of the public. Four musicians, who work closely with the MJAF, also participated in the vote: Yaron Herman, Anne Paceo, Shabaka Hutchings (Sons of Kemet) and Michael League (Snarky Puppy).

THE VOTE FOR MESKEREM MEES WAS UNANIMOUSLY

Beautifully composed tunes, a magnetic presence and a distinct velvet voice: Meskereem Mees was a real eye-opener in the competition, impressing all three juries. The 21-year-old Flemish musician says she is inspired by artists such as Joni Mitchell, Nina Simone and Courtney Barnett. After releasing a handful of singles including the stunning “Joe”, Meskerem Mees is set to release their highly anticipated debut album, Julius, on November 12, 2021.

“I feel very honored to be the winner of a talent prize competition organized by such a renowned festival as the Montreux Jazz Festival. I can’t wait to learn from some of the best musicians in the world at Montreux Jazz Academy. Thank you all, once again, for this incredible opportunity.

At a key point in their career, they also benefit from long-term professional support from the Montreux Jazz Artists Foundation (MJAF) and the Festival’s large network of contacts. The MJAF regularly participates in the programming of concerts in Switzerland and abroad, for example in Swiss cultural centers in Paris and Rome.