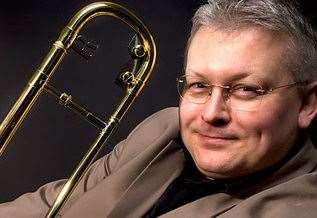 Multi-award winning musician Mark Nightingale is now a firm favorite on the UK jazz scene and has earned a reputation as one of the finest jazz trombonists in Europe and the world. He had longtime musical associations playing in bands led by John Dankworth, Cleo Laine, Stan Tracey, Kenny Wheeler, Andy Panayi, Clark Tracey and Alan Barnes over the years. He also leads various small bands and his own big band, featuring his own compositions and arrangements.

Mark is also a busy session musician in London and has performed on hundreds of film soundtracks and had the chance to perform and record with some of the greatest in all genres of music. These include Ray Brown, Clark Terry, Scott Hamilton, James Morrison, Bill Holman, Frank Sinatra, Charlie Watts, Sting and Steely Dan.

He is best known to many young players for his growing catalog of educational studies and short pieces published by Warwick Music and widely used by the ABRSM and Trinity/Guildhall in their music examination programs.

The club, at Rosewood Hall, Whitchurch Road, Pangbourne operates every first Sunday of the month. For more information [email protected]

Note that the public car park now operates 24 hours a day, 7 days a week, so remember to buy a ticket (enter the registration number of your vehicle at the machine). Please do not park in the members-only parking lot.