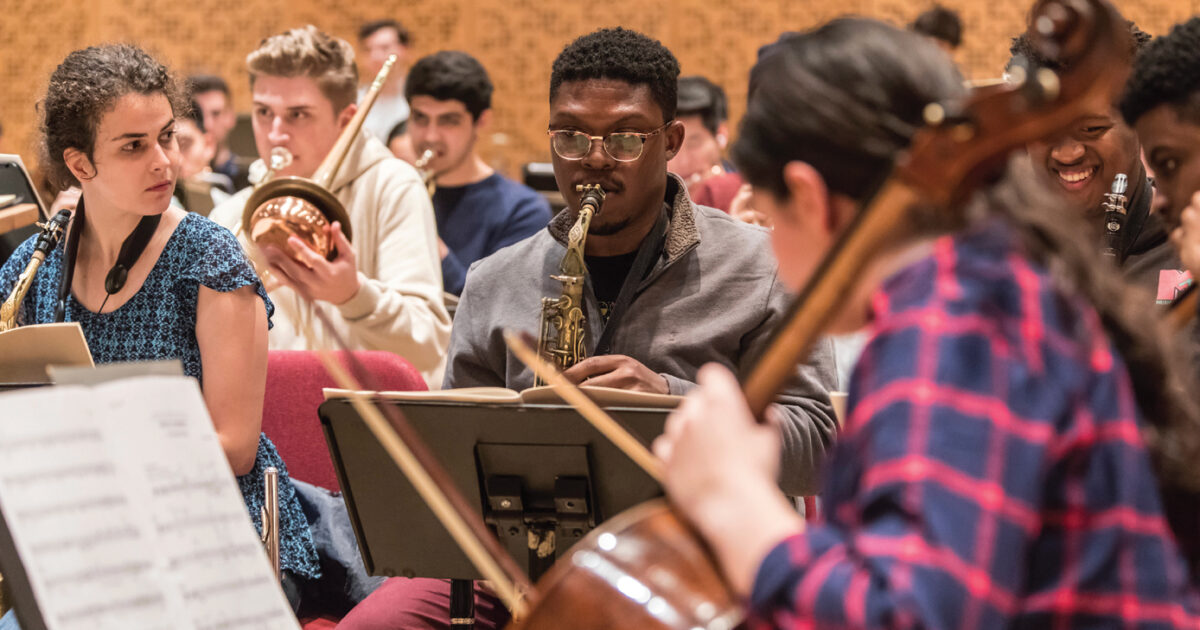 Juilliard Orchestra and Juilliard Jazz Orchestra: Together at Carnegie

It all started in the fall of 2019, when conductor David Robertson conducted a joint reading of Wynton Marsalis Swing Symphony with both sets; in the spring of 2020, Robertson and several jazz and classical students had another reading — this one virtual — leading up to a performance of an excerpt at Juilliard’s Virtual Gala this fall.

The Carnegie collaboration is the first ever between these Juilliard orchestras. First-year master’s violinist Emma Richman (BM ’21, violin) and second-year master’s jazz trombonist Jacob Melsha (BM ’21, jazz studies), both part of the Swing Symphony project since its inception, discussed the preparation of the big event with the Juilliard Newspaperand their words are excerpted here.

At Carnegie, Swing Symphony will be heard in full, as part of an all-American program featuring Aaron Copland’s Clarinet Concerto and Three Dances by Leonard Bernstein On the city. Created in 2010 – it has been commissioned by the Berlin Philharmonic Orchestra, the London Symphony Orchestra, the New York Philharmonic Orchestra and the Los Angeles Philharmonic Orchestra – it is the third symphony by Wynton Marsalis (trumpet , 1981), director of Juilliard Jazz. Composed of seven movements, Swing Symphony is, Marsalis said, a meditation on American ideals and optimism, exemplified by movement titles like “All-American Pep” and “The Low Down (Up on High).”

working with David Robertson
Jacob Melcha: Thinking back to our first reading two years ago, I was so excited about this. I grew up in St. Louis, my parents heard David Robertson conduct the St. Louis Symphony Orchestra in Swing Symphony, and I had worked with him in a youth orchestra there. To perform this piece with a conductor from my hometown that I had worked with, with friends that I had grown up with, and written by the guy who is the reason I am at Juilliard, it is so of roads and avenues that intersect at the same time.

Emma A rich man: I also know David Robertson for a long time. He conducted the National Youth Orchestra when I was there. Having him at Juilliard is coming full circle for a lot of people.

A new kind of symphony
Jacob: Do you feel that much of this music was particularly influenced by jazz? Could you tell it’s written by a jazz musician?

Emma: Sure! It has lots of jazz rhythms and bluesy chords. I remember watching the role and thinking, “Oh my God, it’s just a saxophone bang, and I don’t know how to play it on the violin and I’m going to sit next to these jazzmen and say, ‘what are all these flats?’ “It’s not a classical symphony with jazz harmonies. It’s a jazz symphony.”

Jacob: You don’t usually see this instrumentation. Having a saxophone in a symphony is a rarity, let alone five. And six or seven paperclips. And seven or eight trumpets.

Emma: I love that it’s not the symphony orchestra on one side and the jazz orchestra on the other – it turns the whole orchestra into one giant jazz band. It’s not jazz versus classical, it’s Swing Symphony.

In memory of Badal Roy, pioneer of Indian jazz fusion