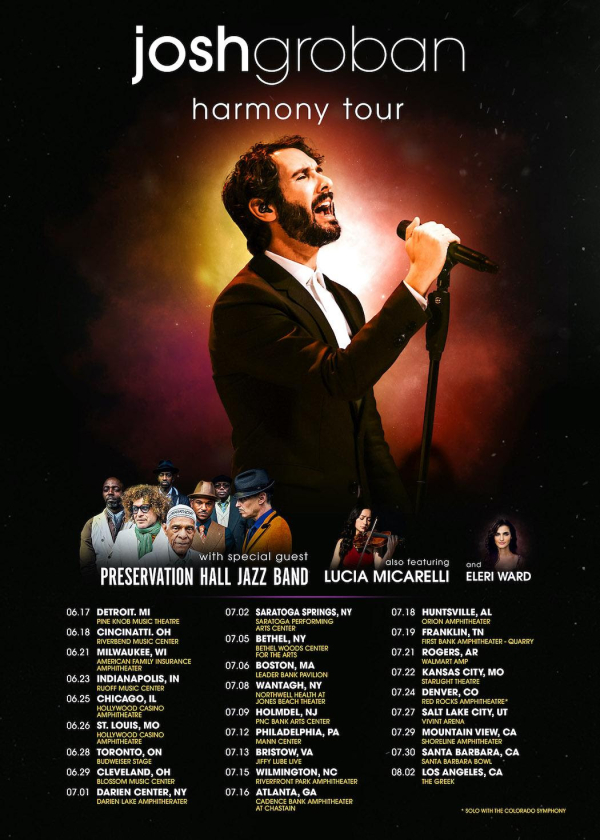 Possessing one of the most distinctive and largest vocal ranges in today’s music, singer-songwriter and actor Josh Groban brought his Harmony Tour to the warm outer confines of Starlight Theater in Kansas City, Missouri.

The pandemic delay has postponed Groban’s chance to shoot this ninth studio album of mostly live covers, following its November 2020 release (with a deluxe version in February 2021, both on Reprise Records). Jalthough a series of live concerts helped fill the void, usual tours have resumed and the Kansas City Date being the 21st To display.

The evening opened with a short but captivating set by NYC Neighborhood Eleriwho reinterpreted several Stephen Sondheim songs in an indie-folk sufjan stevens-style, with Ward singing solo and playing acoustic guitar. Primarily playing songs from his 2019 album, A perfect little death (on Sh-K-Boom Records) this left the crowd wanting more and Ward would return during the headlining set, an/a she is also reportedly considered recording a similar follow-up album.

With triple digit temperatures and high dew point humidity, it already felt like summer in New Orleans, and the perfect soundtrack was provided by a legendary ensemble, Preservation Room Jazz Bandin support of 2019 A snorkel in Cuba (on Sub Pop Records). Existing since the early 60s, it may have seemed like a strange couple on paper to have bandaged in the first part (Groban presented them remotely from the scenes on the screen too), but they Turned out to be ideal support at g helpand the crowd inat a more festive and relaxed atmosphere.

Their forty minute set started with the former WC close at hand “St. Louis Blues” standard with trumpeter Branden Lewis leading the crowd through the lyrics, to help sing. Each member had their brief turn in the solo projector inserted into part of songs like “Didn’t He Ramble” (covered by Louis Armstrong and Dr. John among others), and long hair teacher‘s “Go to Mardi Gras”.

AAs the set progressed, drummer Walter Harris kept the beat with a smile on his face and bassist/music director Ben Jaffe switched from upright bass to their signature tuba, and the fiery set ended with the new album “Keep Your Head Up High”, a 2019 collaboration with Eme Alphonse.

With intro music by Elton Johnthe 1973 single, “Harmony”, Josh Groban and the band came out to begin their hundred-minute headliner, attended by both a Kansas City-based string orchestra and male and female members of the Kansas City Community College Alumni choral.

In addition to the very appropriate walk-on songthe opening of the tray Frank Sinatra cover, “The World We Knew” (also the first track of the new album) also seemed to fit perfectly, becoming nostalgic for the life we ​​all had (before a global pandemic and lockdown). Groban, dressed in all black, moved from side to side on stage as he covered Sting and Robbie Williams following (both from the last disc), mentioning how honored he was to receive kind words from each of the original artists, regarding his interpretations of their songs.

Groban, as we noted when we saw him in 2013, comes off very approachable and funny between songs, often telling humor related stories, commenting on his mood and the audience’s reactions. “I feel like I’m in a Baptist church tonight,” Groban remarked of the heat while fanning himself, “the collection plate is coming soon!”

Switch to the piano for 2006 “February Song” Groban spoke about his feelings at the time about needing to reevaluate things and take a time out and updated that regarding what many have done themselves, during the pandemic.

“Granted’ was partly dedicated to public teachers and Groban wasn’t convinced to sing “She” until he heard the composer Vince Mendozathe arrangement of the 1974 song. A mid-point highlight was a guest appearance, solo, and accompaniment by a violinist in-waiting Lucie Micarelliwho dazzles with his musical dexterity in a bright red dress (and who had already toured with Groban on his Closer and Awake tours).

groban mentioned how an ideal wedding song Pierre-Gabriel song he covered was, brought a “home for the holidays” spirit (with the choir) to his Kenny Connections covered, and brought back Neighborhood Eleri share their collective love of sondheim on “Not While I’m Here”, from Sweeney Todd.

2001 “Aléjate” was preceded by a wonderful flamenco style solo from long-time guitarist and musical director Tariqh Akoni and is actually a Spanish rendition of Celine Dion“Just Walk Away” from a decade earlier, the musical atmosphere turned gospel with “The Fullest” from the new record (a collaboration with kirk franklin), and the main set would end with what became Groban’s signature song, his cover of Secret garden‘s “You Raise Me Up”, a song he first heard randomly in a Dublin taxi).

“A song about perseveranceyou in the face of adversity”- Groban explained how this sentiment has become relevant again in modern times for its lush recall of a song from 1965’s “The Impossible Dream” by the Man from La Mancha musical, his voice rising one last time towards those flowery brick towers of the place and then in the still warm evening air.

“If the world ever needed love before, wWe need it now rgood now “ Josh Groban sings on a new song, “The Fullest” and her return to live after two years of postponement due to the pandemic, was everything her enthusiastic fans had hoped for – joy, love, appreciation, and of course, harmony.