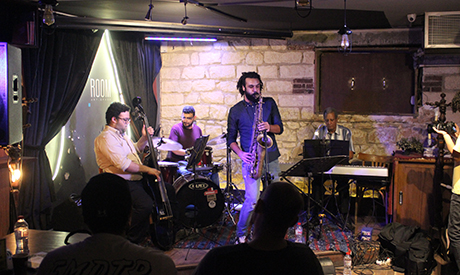 It’s not often that names like Dexter Gordon, Charlie Parker, Dizzy Gillespie, Miles Davis or John Coltrane appear in town. But Cairo music lovers had the chance to experience some of the best works by jazz’s biggest heavyweights at the Room Arts Space & Café in Garden City on Thursday, August 12. And that’s thanks to the newly formed JJ Quartet, whose rendition of some of the best-known classics in the standard jazz repertoire is reminiscent of the pure tones that shape the bebop and post-bop eras. It is probably enough to quote Take the A Train, Ceora, Yardbird Suite, Anthropology, Confirmation, In a Sentimental Mood to give an idea of ​​the evening.

While much of the evening was occupied by Amr Wagih leading new classical number arrangements with his saxophone, other JJ members also had the chance to work their magic in the cozy space. Wagih’s role in creating JJ is huge, but equally crucial was jazz pianist and educator Rashad Fahim, a Berkley College of Music alumnus. The two were joined by Karim Adnan Kotb (commonly known as Karim Adnan), principal bassist of the Cairo Opera Orchestra, and drummer Ahmed Moustafa-Riad. Unlike many other bands, JJ Quartet is driven by an almost purist reserve aimed at a pure jazz experience, with Fahim believing that any fusion would undermine the core values ​​of jazz.

“JJ stands for Just Jazz,” he says. “We don’t do Arab jazz or Egyptian jazz, we don’t do that kind of fusion, I don’t favor them; we play jazz the way it is. He mentions an Azerbaijani singer, pianist and composer, Aziza Mustafa, whose jazz fusions have brought her international fame. “She’s a master of the genre, a musician who has covered all the basics of jazz. She understands jazz very well and is free to weave other influences into it, ”comments Fahim with passion.

Looking at the current musical explorations of many musicians and groups in Egypt, it is Fahim’s devotion to jazz standards that adds a unique flavor to a local music scene fueled by cross-cultural currents. The JJ Quartet introduces a unique quality and a sound rarely delivered by other groups.

It should also be added that throughout his rich musical career, Fahim has performed with many musicians specializing in jazz, participating in workshops with jazz icons such as Chick Corea. One of his famous groups is the Rashad Fahim Trio, which he founded in 2005 with bassist Andrew Safwat and drummer Amir Attalla. Throughout his creative endeavors, his exceptional musicality and skill are marked by a puritanism of jazz.

Produced following meetings between Amr Wagih and Rashad, the new project reflects this state of mind. “I’ve been studying music with Mr. Fahim for three years now,” Wagih says. “During our sessions, the idea of ​​creating a new group was born. I contacted Karim Adnan and Ahmed Moustafa-Riad, and we started jamming as a quartet at the end of 2020. Over time, a unified musical language began to emerge.

From Latin jazz to bebop via swing jazz, to Room Arts Space & Café, the JJ Quartet takes us through endless layers of sound. Among the numbers in the repertoire was The Night Has A Thousand Eyes, one of John Coltrane’s hallmarks. Wagih faced the challenges of composition, allowing the rising tune to showcase its abilities. No less complex for the saxophonist was Charlie Parker’s Confirmation. Backed by Moustafa-Riad, who handled the rhythmic intricacies with remarkable precision, Wagih’s attack and release notes added his distinctive musical expressions to the composition.

Much softer phrasing has appeared in Duke Ellington’s In a Sentimental Mood, a composition that invites the audience to close their eyes and enjoy multiple conversations between the musicians, including those masterfully developed by Fahim on the piano with Moustafa-Riad at the drums. Also in the softer note, Wagih’s saxophone gave Miles Davis’ modal jazz ballad Blue in Green (originally written for trumpet) a freedom of interpretation that bore witness to endless imagination.

We could go on talking about the uniqueness of each composition and how it contributed to the memorable evening, but end with the iconic bebop-style Anthropology, a piece characterized by a happy harmonic play that has given every musician space to present a masterful solo, allowing Adnan to free himself from his years of practice within the limits of classical music.

Anthropology, Ceora, Yardbird Suite, Straight No Chaser and many other well-known compositions performed allowed the audience to witness the remarkable interaction of the musicians despite the differences of musical origin and generation, testifying to meticulous preparation.

Wagih, Adnan and Moustafa-Riad represent a young generation who have learned from Fahim’s experience. “I am happy to work with young people,” says Fahim. “Each musician of the JJ Quartet adds something precious, something unique. One musician can have a captivating intonation, another excels in precision, another creates a strong bond with the listeners… These elements and many more make the experience interesting, ”says Fahim, adding that Miles Davis has worked with. musicians of different generations and backgrounds.

The common language the four musicians found together remains one of the many pieces of evidence that jazz can merge the many gaps between artists while fueling their unique personal development. Wagih’s journey with Rashad Fahim was filled with educational benefits – few are lucky enough to have such an experience. “Today, I feel a lot more confident when I play not only jazz but also other genres,” comments Wagih, adding that the jazz standards with their improvisations allowed him great spontaneity.

Moustafa-Riad has been involved in music from an early age, but it is only now that he performs pure jazz. “I was playing with bands in what we call mergers,” he says. “With Mr Fahim, I learned a lot about new ways of working on harmonies and musical structures. For example, I had never played swing until the JJ Quartet. It is also the first time that I have felt this freedom and I appreciate its conversational nature.

The notion of freedom comes up in the comments of all musicians. It’s also particularly interesting coming from Karim Adnan, the only member of the quartet with a solid background in Western classical music. “Karim reads the scores brilliantly,” notes Fahim quickly, smiling. Yet while academia and years of classical music performance are definitely valuable for a professional musician who focuses on technique and personal expression, they can also create limits to flexibility and improvisation. While the controversy over what is good and what is not in music is a hot topic resurfacing between classical musicians and jazz musicians, studies have also shown that even their brains are wired differently.

Wagih notes that during the months of preparing the JJ Quartet’s repertoire, the most poignant conversations about approaches to the score have taken place between Rashad Fahim and Karim Adnan. “Although their opinions may have differed at times, they always reached a satisfactory creative resolution,” he says.

Meanwhile, Adnan feels he is enjoying the jazz experience a lot. He reveals: “I have explored jazz before, but with Mr. Fahim, this is the first time that I have treated this music so professionally. In the orchestra we wear tuxedos, in jazz we can dress freely. This is exactly the feeling I get when playing jazz. I appreciate the feeling of freedom and the large improvisation segments. It is very enriching. “

With their first gig now behind them, JJ hopes to perform more often in the weeks and months to come. Isn’t the Cairo Jazz Festival just around the corner, in fact?

The Egyptian music scene is full of initiatives integrating jazz, creating fusions. In fact, Egypt has many names that have shaped the notoriety of jazz in the country, starting with Salah Ragab (1935-2008), a military commander who introduced the genre to the public with the Cairo Jazz Band and a pioneer of the Egyptian jazz.

Names that have made their mark on the scene also include Rashad Fahim, Akram El-Sharkawy, Yehya Khalil (founder of the Cairo Jazz Quartet), Fathy Salama, Eftekasat band, Wave Jazz Band and the newer Tarek Raouf Ensemble based on the four-man jazz combo. corns. , among others. While very few of them remain dedicated to jazz standards or integrate them into their fusion-induced repertoires, others tend to present musical mixtures which are, to use a broad term, coined like oriental jazz with all of its subgenres.

In the era of mergers, the return to pure jazz with the JJ Quartet is undeniably a beneficial experience for musicians who perform on stage but also a precious reminder of this music offered to all listeners.

* A version of this article is published in the August 26, 2021 edition of Al-Ahram Weekly