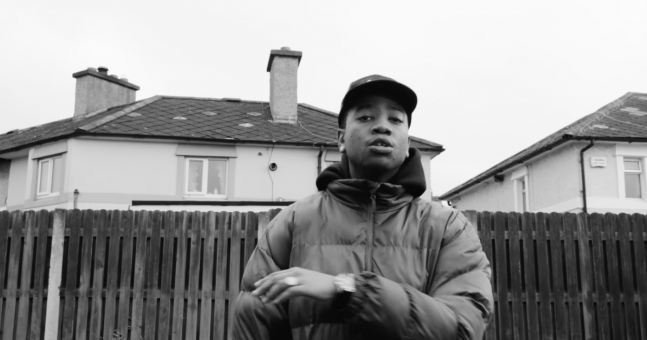 South African-born, Dublin-based hip-hop artist Jehnova has once again teamed up with producer sivv for a stunning new collaboration.

Dublin rapper Jehnova has unveiled the black and white visuals of new track ‘Cape Of Good Hope’, produced by sivv and directed by Brian McGuinness.

The low-key, locally shot footage was filmed by David Christopher Lynch and features NUXSENSE, the rap collective featuring Jehnova and her cousin, producer sivv. The couple was born in South Africa, it turns out.

With a shimmering blues piano melody and down-tempo groove, the hip-hop entertainer traces his attempt to retain his motivation for music and the oppression he witnessed in his life.

“I threw the roaches on the shed/Hiding my addiction/I been here looking for music and that was my decision,” he raps. “I stress, but they listen.” He meanders through the roads and streets of Dublin, later merging with his friends in the immersive visuals.

Check out the video for “Cape of Good Hope” below.

Over the past five years or so, Jehnova has released a string of solo singles outside of NUXSENSE, including “Striped Pyjamas”, 2019’s “Eudaemon”, and “Weak Days”.

The Seven Tracks Avenoir released in april 2021 on andfriends records, a joint project with producer lod. Avenoir evokes classic East Coast hip-hop (boom-bap drum loops and prominent samples) with a darker edge that hints at a new form of warped New York rap. The likes of MIKE, Caleb Giles, Slauson Malone and others led the way.

“My album, Saint Ivy, with my brother sivv is currently in the mastering phase,” the Dublin-based rapper recently told Hot Press for On Our Radar. “Each member of NUXSENSE will be releasing individual albums with sivv, following Time on Earth by Luthorist starting in late 2021. Lod and I are also working on collaborations. I plan to post some great material to connect with the people who have supported me through these years of learning.”