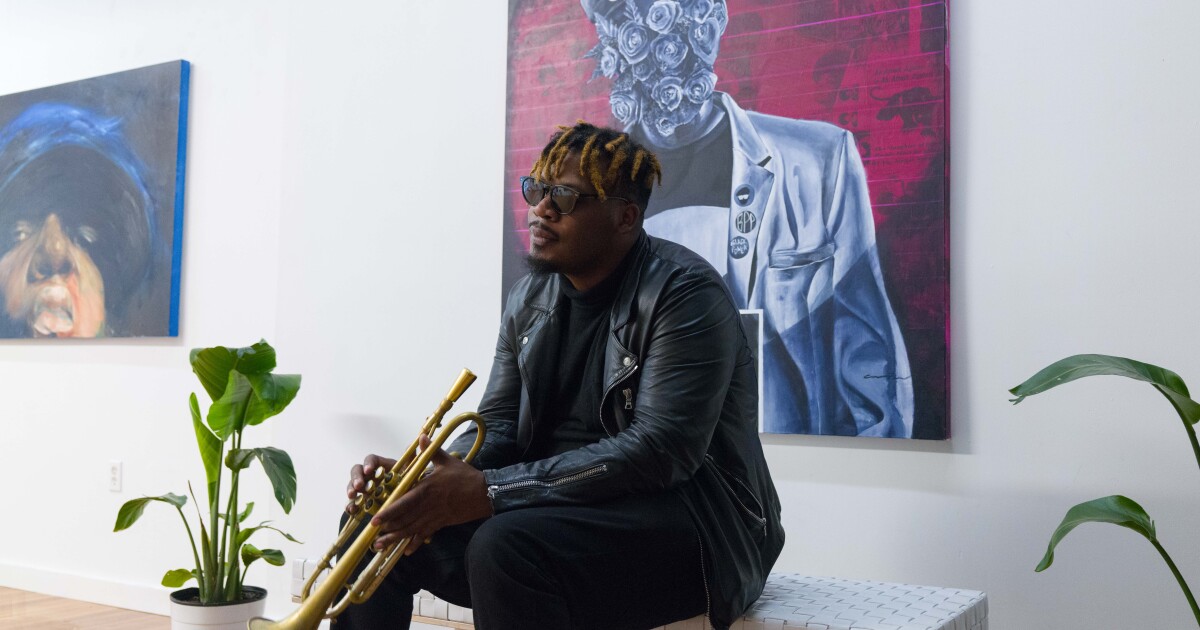 As a teenage jazz prodigy hungry for more music and new experiences, Ferguson native Keyon Harrold had an open invitation to visit Jazz Saint-Louis, then known as the Ferring Jazz Bistro. On several memorable occasions, he had the chance to sit down on the trumpet with jazz greats, including trumpeter Roy Hargrove and bassist Christian McBride.

At the age of 18, he attended New School in New York City and landed a job as a touring musician with hip-hop star Common. He continued to collaborate with many big names in popular music, including BeyoncÃ©, Jay-Z, Mary J. Blige and Erykah Badu.

Earlier this year, Jazz St. Louis appointed Harrold its first Creative Advisor. The position will last three years and includes a commission for an album composition reflecting the musical heritage of Saint-Louis. Harrold will also participate in the educational programming of Jazz St. Louis. He plays St. Louis Jazz until Sunday, featuring a guest series highlighting his broad musical interests.

Harrold’s credits as conductor include the well-received 2017 album ‘The Mugician’, [C.F.] which highlights his political activism after Darren Wilson, then a Ferguson police officer, killed Michael Brown Jr. Harrold’s 2016 song “Running (Refugee)” is a collaboration with Common, Gregory Porter and Andrea Pizziconi who has raised funds for groups that support refugees.

Jeremy D. Goodwin of St. Louis Public Radio asked Harrold how music can be a vehicle for social change.

Keyon Harrold: Music is one of the main platforms for spreading messages.

Jeremy D. Goodwin: On your last record, you included a tribute to Michael Brown Jr. called “MB Lament”. What do you want people to hear when they put on this track?

These are the things that as an artist I have the chance to highlight. I have the opportunity to talk to people. Because they pay to see me. They come to see me. So at least you can get what I’m saying. At least you can understand how I’m feeling, in the most honest, unfiltered way.

Goodwin: When you express this through music, is there anything the listener can get from it that is not quite what they get by hearing a speech or reading an article or just by having a conversation with someone? It’s a different form of language that creates a different impact.

Harrold: The absence of words, sometimes, gives a more visceral feeling. I look at my art, I look at my horn, like a microphone of my soul. It is what it is. This is my soul, amplified. And sometimes it’s deeper than words.

Goodwin: When you work with children, are you very interested in the idea of â€‹â€‹music as a force for social change? Is this something that interests young people?

Harrold: I have the impression that there is an opportunity for young people to really get involved in what awaits them. And if they have the right message, they have the opportunity to act. Music is therefore a perfect medium for this. Everyone can dance, everyone can move a little. Most people can enjoy good lyrics and good music with good rhythm. Most people can get by. That’s why I’m now working at a non-profit organization called Music Against Bias.

About a year ago my son was attacked at the Arlo hotel [in New York City]. I thank God for being there to be with my son and protect him in the situation where he was totally raped and accosted. But I know there are a lot of kids whose parents aren’t there when something goes wrong, when injustice knocks on their door.

So Music Against Bias will be something that really educates kids about things that aren’t that kosher. Children are like a garden. You have the opportunity to eliminate prejudices. When it comes to racism, when it comes to sexism, when it comes to any kind of fanaticism. If we can teach children now, they can grow up. And we can eliminate things from it that are not productive for anyone. To create a global community, create a local community of people who understand and trust each other more.

Goodwin: You are in the process of creating this new role of Creative Advisor at Jazz St. Louis. I know you went out and met different groups. Who did you talk to?

Harrold: Mathews-Dickey Boys and Girls Club. We met Forward by Ferguson. We met the mayor. We have met so many amazing people here, who will support my artistic vision above all else, and create initiatives to help these kids who are like me – or not like me. Have the opportunity to express yourself and become great human beings.

Goodwin: How do you see yourself in the community? What types of projects could you get involved in?

Goodwin: So if you find someone who really has something to do, can you be a connection to them?

Harrold: Absoutely. I can’t wait to be a conduit to their next iteration of greatness.

THE MUSIC OF MARY LOU WILLIAMS