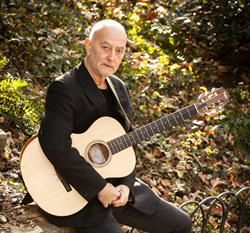 Jazz pop singer-songwriter Steven Blane releases new album that reflects a variety of themes, genres and with a Jewish thread

Light-hearted and relatable, the lyrics advise that “happiness can be found cheap, but it can be quite expensive to keep.” This thread of humor runs throughout the album and all of Blane’s work.

Rabbi and cantor Steven Blane is a pop-jazz-Americana singer-poet in the style of Leonard Cohen, Jon Mitchell, Tom Waits and Roy Orbison who releases his new album, “The Met” on June 15.

The album is sincere, but not without its cheeky moments. The closing track, “The Best Things In Life Ain’t Free,” is a play on an old adage (and a Sinatra song). Light-hearted and relatable, the lyrics advise that “happiness can be found cheap, but it can be quite expensive to keep.” This thread of humor runs throughout the album and all of Blane’s work.

Although attempting such a distinguished and complex style of songwriting can seem daunting, Blane is blessed with both a voice rich and sonorous enough for this type of material and a finely honed skill to navigate the side. compositional, with a natural flair for melody.

The quality of the album should come as no surprise to those familiar with New York-based creative Blane.

He is also a rabbi and cantor, and as such sings and writes from a place of intimate familiarity with the human condition. As rabbi of the Sim Shalom Universalist Jewish Synagogue, he conducts regular services and major feasts in which the universal language of music plays a prominent role. Listeners from all walks of life would do well to peruse his playlists of Jewish liturgical music.

Blane is no stranger to the New York concert scene (for a taste of his gigs, check out his video collection). Steve Blane’s work is truly in a class of its own.

Share the article on social networks or by e-mail: