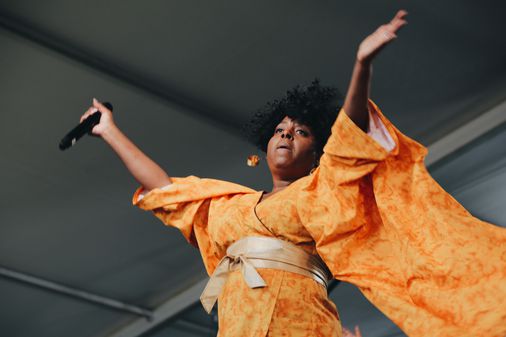 Jazz is finally coming back to Newport, and it’s something to celebrate

NEWPORT, RI – While not explicitly the theme, this year’s Newport Jazz Festival, judging by Saturday (midway through the festival’s three days of performances), was much more about gratitude and good feeling. .

Last year’s festival was canceled due to COVID-19, and live music in general has only recently started to return. No wonder, then, that the musicians seemed to kiss even more generously than usual, happy to get back to work and bumping into old friends for the first time since confinement.

There was less music than usual – two stages instead of what had become four in recent years – and a smaller audience to meet social distancing requirements. But there were still plenty of them.

Terri Lyne Carrington & Social Science performed early Saturday afternoon on the Quad Stage, mixing top notch music with social justice messages on a range of topics including the US prison industry, abuse of Native Americans and others. “Pray the Gay Away” was a highlight, opening with Morgan Guerin’s unaccompanied tenor saxophone soon joined by the other instrumentalists and finally the vocalization of Debo Ray and Kokayi. Ray also shone at the closing of the “Bells” set, repeating the lyrics protesting the police killings after an instrumental hiatus made its way into a crowd-pleasing crescendo.

Christian Scott aTunde Adjuah â€‹â€‹played a tight set on the Lawn Stage, with minimal political commentary and group introductions. It included a supercharged cover of Herbie Hancock’s â€œEye of the Hurricaneâ€; the slower â€œGuinnevereâ€ (the David Crosby ballad that Scott discovered through the Miles Davis version); and the leader’s own “The Last Chieftain”.

This year’s festival artist in residence, Robert Glasper, presented different sets each day. Saturday was his Dinner Party project with Terrace Martin, a casual affair also starring Kamasi Washington. The set started several minutes later than expected, and started with Glasper joking about festival artistic director Christian McBride being the first person to take him out of the country when he was in college, thanking McBride for having failed all of his courses. Noting that this was the band’s first time playing the music from the album â€œDinner Partyâ€ live, Glasper said, â€œWhat you just sawâ€¦ those seven minutes. [delay]? It was a rehearsal.

The music itself was an intriguing mix of jazz and other genres. It all started with Martin’s introduction of a cover of Herbie Hancock’s “Butterfly” on synth and vocoder, which morphed into a relaxed Washington solo and melody playback of the song. Vocalist Phoelix sang a pair of songs from the album. Scott, who had been in a previous super group with Glasper and Martin, sat down with this one after his own set for an extended instrumental piece that everyone had solos on, Martin taking his on sax. alto.

Chris Potter dazzled on the tenor saxophone with his Circuits Trio on the lawn stage, followed by the legendary Mavis Staples performing an ensemble featuring familiar pieces like the Staple Singers classic â€œRespect Yourselfâ€ and the witty â€œWade in the Waterâ€.

Meanwhile, Ledisi’s captivating tribute to the late contemporary Staples, Nina Simone, began at the Quad Stage. Ledisi has spoken of being depressed and suicidal a day ago and being pulled out of it when Simone’s song “Trouble in Mind” entered the next room and saved her life. “I started to squirm” to the beat of the music, she recalls. “After that, I listened to everything from Nina Simone.”

Ledisi’s song selection evoked a range of emotions to match her extraordinary vocal range, with highlights such as the striking combination of Simone’s “Baltimore” and her own “Shot Down” and the closest to it. “My Baby Just Cares for Me” atmosphere. But each song achieved the desired effect. â€œThey like to put us in boxes,â€ she told the audience. â€œI do what I want to do. Thanks to Nina Simone for paving the way for this.

Bill Beuttler can be contacted at [email protected].