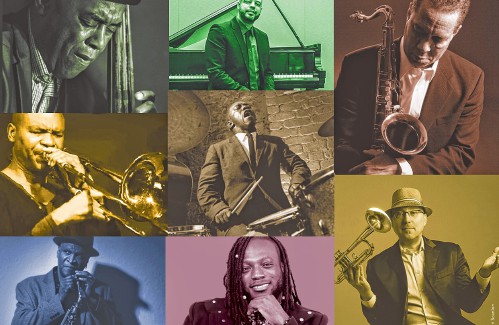 The Northampton Jazz Festival, closed last fall due to COVID-19, returns this weekend, October 1-2, with a busy schedule of live entertainment, with shows at Pulaski Park, several downtown restaurants and other venues, and a final concert at the One Music Academy that will celebrate the music and legacy of the late drummer Art Blakey.

And thanks to the festival’s producers and their sponsors, all music except the Art Blakey show is free.

Tonight (Friday), the so-called “Jazz Strut” starts at 4pm in Pulaksi Park and continues until 10.30pm at The Deck Bar & Restaurant, as seven ensembles perform in six locations, with sets. ranging from one hour to two hours. On Saturday, “Jazz Fest Day,” seven more artists perform at downtown venues such as the Northampton Center for the Arts from 11:30 am.

Ruth Griggs, chair of the festival board, said this year’s event will feature more female players than ever before, including Lioness, a six-member collective from Queens, New York playing Saturday at First Churches of Northampton from 3 p.m. to 5 p.m.

The one labeled event, starting at 7:30 p.m. Saturday at the Music Academy, features the Celebration of the centenary of Art Blakey, a multigenerational seven-member ensemble that includes several musicians who were at one time part of Blakey’s group, the Jazz Messengers, first formed in 1954 when Blakey (1919–1990) was considered a prominent figure in American jazz. after war.

COVID protocols such as face masks are in place for all events; visit northamptonjazzfest.org for more information on these and the full lineup and schedule.

Jim Henry and Tracy Grammer, Hawks & Reed Performing Arts Center, Greenfield, October 2, 8 p.m. – These two veterans of Valley acoustics, known for their repertoire of Dave Carter songs, originals and arrangements of melodies such as “1952 Vincent Black Lightning ”by Richard Thompson, will offer something quite different tonight: the music of Simon & Garfunkel.

In an email, Henry, a multi-instrumentalist who has performed with dozens of artists over the years, said he and Grammer have played a regular series of online shows since the start of the pandemic, said filming in a Henry studio set up in his basement. They used different themes for the shows, such as songs that start with the letter B, and at one point they chose to try out tunes from Simon & Garfunkel.

Henry says he’s been a fan of Simon & Garfunkel “for a long time because they were part of my childhood. I have played many of their songs for years. But I never really tried to play their music as a duet. Learning the intricacies of their harmonies was definitely a challenge for me.

In addition to learning harmonies, he and Grammer, known for his rich vocals and graceful violin playing, have adapted songs such as “The Boxer” and “Homeward Bound” for their own line of instruments, including two guitars. acoustic, a mandolin and a violin.

“I love playing ‘Song For the Asking’,” said Henry. “Such a cool guitar part. And singing the harmonies on ‘Sounds of Silence’ and ‘Old Friends’… it’s a real treat.

Hawks & Reed jumped in October with a very busy schedule overall, in part because Signature Sounds, the Northampton record label and concert producer, had planned to reopen The Parlor Room this month and there had booked plenty of shows – but then moved concerts to Greenfield after the Delta variant boomed, the cozy Parlor Room became a bit too risky for a live music comeback.

“There is more room to put on a show [at Hawks & Reed] and give people some space to be separated, ”said Signature President Jim Olsen. “And Hawks & Reed have been very good at hosting our shows.”

Among Signature’s October lineup (the Henry / Grammer show is not one of them) is the fiddler duo Alasdair Fraser and cellist Nathalie Haas, coming to Hawks & Reed on October 6th at 7pm. [a] shared passion for improvisation on the melody and groove of Scottish tunes ”- helping to“ reconstruct and revive the Scottish tradition of playing dance music on the violin and cello ”.

McKeown, who has taught in the Department of Theater Arts and Performance Studies at Brown University in recent years, also wrote the music for the acclaimed musical “Miss You Like Hell” in 2018. But with her new album, she evoked the sounds of late ’70s / early 80s rock, with lots of punchy electric guitar: think Blondie, Elvis Costello, and maybe a little Lou Reed. She released a new single, “Go Along / Get Along” from the album and a fun video to go with it.

Her show Shea Theater will also kick off a lengthy tour for McKeown – her first since You Know What Happened in March 2020 – which will take her to the East Coast, South and Midwest, then California and the Pacific. North West.

The opening of the show will be JOINT, independent rockers led by singer and guitarist José Ayerve and drummer JJ O’Connell. The group will also be supporting McKeown during their set.

The venerable singer, performer and songwriter Judy Collins, whose career spans six decades of music ranging from pop and folk to show tunes and rock, brings his legendary voice and blue eyes to the Northampton Academy of Music from October 10 to 19 h 30

PMJ has now grown into a YouTube phenomenon that has incorporated some 70 artists, with the tagline “Today’s Hits Yesterday”. The group comes to the Academy of Music on October 13 at 8 p.m.

Scottish National Jazz Orchestra – “Live At 25” in Edinburgh – News, reviews, articles and commentary from the London jazz scene and beyond