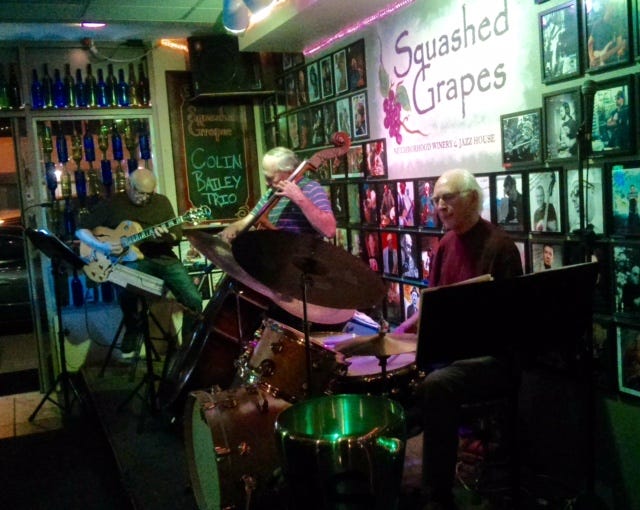 Colin Bailey, a jazz drummer whose decades-long career has been working with Frank Sinatra and Vince Guaraldi, died at his home in Port Hueneme on Monday. He was 87 years old.

Bailey’s widow Michele Munro said Bailey had been in hospital for a pneumonia attack after recovering from COVID-19. The couple first moved to Ventura County in 2015 after visiting Bob Bain, Bailey’s friend and former Tonight Show Band guitarist, who lived in Silver Strand until his death in 2018.

“Colin would come here a lot to play concerts,” Munro said. “We just found out it was a hidden little paradise and we really liked it here.”

Bailey was born in England in 1934, where he started playing the drums and learning the piano at the age of 4. At the age of 18, he was touring Europe with ragtime pianist Winifred Atwell, Munro said.

Bailey moved to the United States from Sydney, Australia, in 1961 as part of the Australian Jazz Quartet. While playing in San Francisco, he met jazz pianist and composer Vince Guaraldi, who became most famous for writing music for the animated specials “Peanuts”. Within weeks, Bailey had joined the Vince Guaraldi Trio.

Bailey would go on to perform on five albums with Guaraldi. As a member of the trio, he recorded the famous instrumental “Linus and Lucy”, along with eight other tracks, for the 1964 album, “Jazz Impressions of A Boy Named Charlie Brown”.

The tune, often referred to as the theme song “Peanuts”, is propelled by a distinct, slightly shifted phrase repeated in the lower register of the piano that has found its way into the auditory memory banks of a generation. Munro said she was not sure if the same version of “Linus and Lucy” appeared on the album for the “Charlie Brown Christmas” soundtrack released the following year.

According to Bailey’s website, he worked as a studio musician, recording and performing with a list of artists including Joe Pass, Benny Goodman, George Shearing, Rosemary Clooney, Chet Baker and Paul Horn.

While working in a jazz club, he was approached to perform on Frank Sinatra’s album with bossa nova legend Antonio Carlos Jobim. Having only one day to record in the studio, Bailey performed on four tracks for the project, according to Munro.

In 1967, Bailey began working in television. He was a replacement for Johnny Carson’s Tonight Show Band and appeared on the “Carol Burnett Show” among other television credits, and also performed with vibraphonist Terry Gibbs on the “Regis Philbin Show”.

Gibbs, in a statement, mourned the loss of his former bandmate.

“We will miss you so much,” Gibbs wrote. “Your warm personality, your great humor and your funny comments and, of course, your great drums and your teaching. “

In his later years, Bailey was named one of the top 500 drummers by Drummerworld. He has written three books on the technique of drumming, including Bass Drum Control, which remains in print more than 50 years after its initial publication.

After a stint in Texas to record commercials and teach at North Texas State University, Bailey moved to the San Francisco Bay Area. In 2011, he met Munro at the Oakland Yoshi’s Jazz Club. The two were brought together by their mutual love for jazz music.

Bailey continued to perform, teach, and tour as a freelance drummer during his later years of life, despite health complications such as cancer chemotherapy. Munro said she was comforted to see the outpouring of love and memories about Bailey on social media. In addition to his Munro, Bailey is survived by his family in the UK

Jeremy Childs is a news and public safety reporter covering the Ventura County Star night shift. He can be reached by calling 805-437-0208 or by emailing [email protected] You can also find him on Twitter @Jeremy_Childs.

Charlotte’s “Jazz Diva” Tammy Greene Passes Away After Years of…

Racism led to the expulsion of a jazz band from Australia in 1928, according to the…