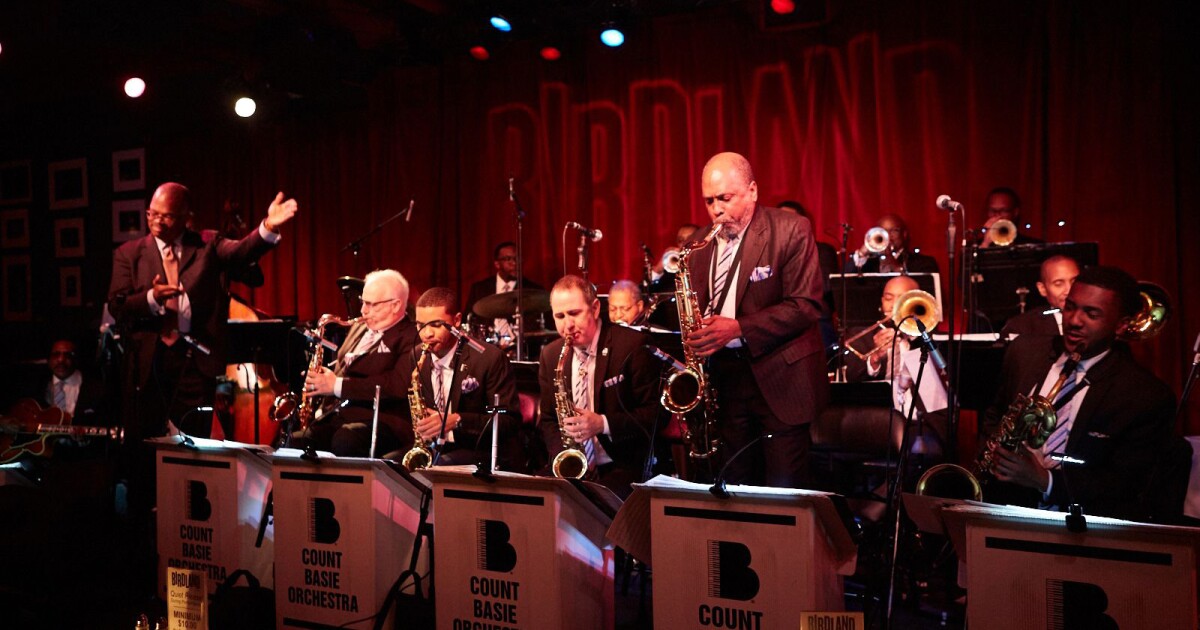 As we trained through the disheartening month after month of the pandemic, it began to make sense to wonder if we would ever get dressed again. Even now, as we brazenly take two steps back for each penitent, we are told that remote work is here to stay.

The new normal, for better or for worse, will be less formal.

For the better, because you can reallocate your business casual budget to something that, in today’s Marie Kondo jargon, “serves you better”. For the worse, because feeling good and feeling fresh are not the same thing. And for the health of your self-image, feeling cool every now and then works wonders.

This is why the tuxedo and the theatrical adornments exist. But if you’re not ready to go all white-tie in an auditorium full of strangers who have been vaccinated or not, let me introduce you to a relatively risk-free alternative: the latest release from The Count Basie Orchestra (CBO). Living in Birdland.

Recorded for four nights in January 2020 in the third incarnation of the famous New York club that Basie considered his musical house, Living in Birdland is a Cool Haircut, Razor Shave, Brylcreem, and Polo Green from Ralph Lauren; it’s patent leather wing tips and a black bow tie that hang from an unbuttoned collar after drinking a few martinis. It’s classic cool and timeless.

On two discs and 33 – yes, 33! while dealing with CBO’s catalog meat – tunes like “The Kid from Red Bank”, “Kansas City Shout”, “Blues in Hoss’ Flat” and “Whirly Bird” – with the secret recipe for precision and exuberance County.

Listeners will notice some amazing new arrangements thanks to trumpeter Scotty Barnhart, who has been CBO’s Music Director since 2013. and “There will never be another you.” The former smokes and crackles like a barbecue on a hot East Texas day, while the latter, usually a mid-tempo crooner’s favorite, is a double delight.

And, as with every iteration of the Basie band, the horn soloists are assertive and muscular, yet gentle; they are never out of tune and come in and out of their breaks like professional cornerbacks. Do yourself a favor and watch Barnhart channel Satch on “Moten Swing”. And take just a second of your day to listen to what baritone saxophonist Joshua Lee is posing on “Whirly Bird”. The South Philly native – honored as one of Temple University’s ’30 Under 30′ in 2020 – will let you shake your head in humility, playing bebop lines on the bari with a setup like the one of a bird.

But with CBO, as with any organization that has operated at a consistently high level for 85 years, it all starts with the CEO. Here there are three general managers: pianist Glen Pearson, bassist Trevor Ware and drummer Robert “BT” Boone, Jr. Their powers combine to form a rhythm section in the best tradition of Count Basie and Jo Jones.

Listen to their conscious complicity during the first 40 seconds of “The Kid from Red Bank” as they play a skipping rope classic with the Birdland audience. As Ware walks bassline eggs over Pearson’s blues noodles, half the crowd follows the rhythm of the locomotive triplets coming out of Boone’s Charleston, while the other half wonders, “Where’s that brassy muscle?” from Basie? “

These 14 horns hit with the force of a forehand from Riddick Bowe, giving credit to long-standing analogies the Wall Street newspaper Jazz critic Will Friedwald used it in 2015 to explain how Basie revolutionized jazz – “by allowing 18 men to perform together in a way that combines the strength of a boxer with the grace of a ballet dancer” .

Of course, if we are talking about Basie, in front of 18 good men is usually an equally talented woman. The Billie Holidays, Helen Humeses, Ella Fitzgeralds and Sarah Vaughan have always been just as important, especially from a business standpoint, as the Frank Fosters, Thad Joneses and Lester Youngs.

When the Earl discovered Carmen Bradford in 1982, Bradford, then 22, became Basie’s last singer selected for the CBO. Almost 40 years later, she’s more versatile than ever, swaying and swaying with a bouncy recklessness on “Honeysuckle Rose” but arguably more impressive communicating a deeper sentiment on ballads counting with love and mortality like “Only the Young “and” How Do You Keep the Music Playing “, tunes that require mature vocals – watch the duet between Bradford and majestic baritone Jamie Davis on the latter – to be performed correctly.

There’s not much new here, not much that can be called innovative, no matter what that increasingly nebulous but ubiquitous merit badge means. And maybe that’s why this album is, musically and conceptually, refreshing.

Rather than pleasing artists, this project pleases the public. Just listen to the response from these guys; it’s electric. It makes you wonder if the demand for innovation, for novelty, is what we are told, or if, perhaps, we underestimate continuity – the kinds of things that have always brought us joy. and made us feel good about ourselves – to our detriment.

With that in mind, embrace remote working if it serves you. But don’t forget to dress up sometimes; a little unnecessary formalism is good for the soul.