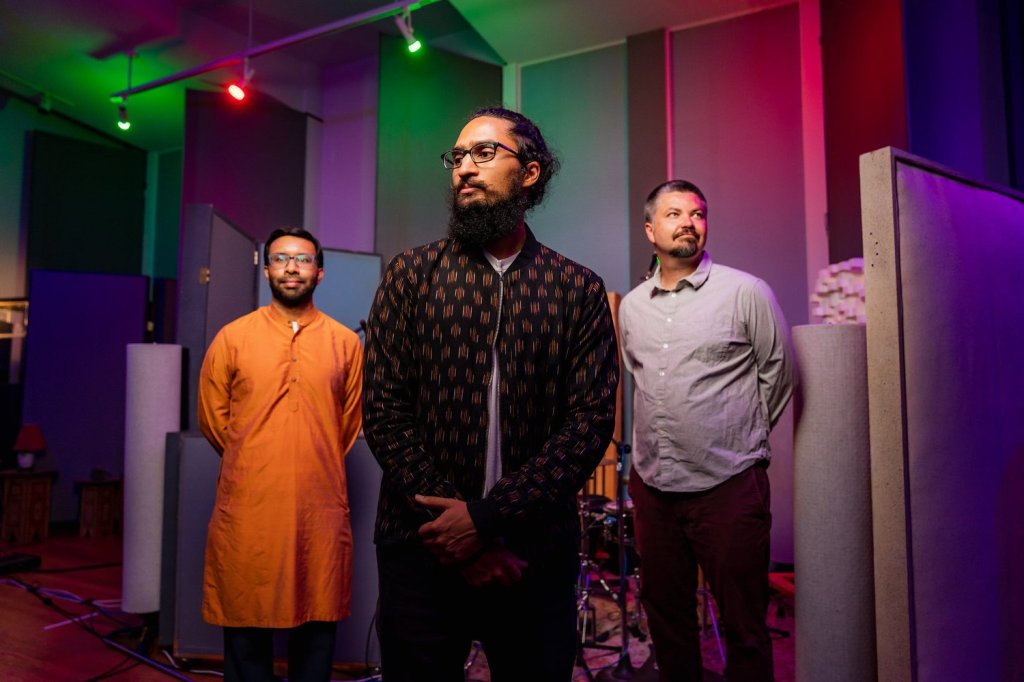 Friends and musical collaborators since middle school, Rohan Krishnamurthy and Prasant Radhakrishnan had been talking for years about starting a band that could bring together their love of jazz and their deep training in South Indian classical music. When they started Project Alaya in 2017, it was the Beatles who finally aligned the stars.

An East Bay musician who combines drums and Carnatic hand percussion, Krishnamurthy realized a golden opportunity had come his way with an invitation to join an UnderCover Presents production celebrating the 50th anniversary of “Sgt Pepper’s Lonely Hearts Club Band” at the UC Berkeley Theater.

With each act performing a track from the classic album, he figured the obvious choice would be George Harrison’s “Within You Without You” sitar. Instead, UnderCover Presents producer Lyz Luke tapped him to reinvent “Being for the Benefit of Mr. Kite!”, a challenge he knew would intrigue Radhakrishnan, an alto saxophonist who had passed years of mixing jazz improvisation and classical Carnatic forms.

“I immediately contacted Prasant,” Krishnamurthy, 35, said from his home in Dublin. “Let’s try this. I could really hear the accordion for the melody too, and that’s where I met Colin Hogan, a Bay Area heavyweight. I had known him through the stage, but the first time we met was for ‘Mr. Kite.’ I like to tell people that basically the Alaya project is actually a Beatles cover band.

The trio included the thrilling arrangement of “Mr. Kite” on their self-titled debut album released last month on Bandcamp, but most of Alaya Project’s tracks are originals exploring the musical territory they crafted to mix ragas Carnatics to African-American musical idioms. Celebrating the September 23 release of “The Alaya Project” as part of Hammer Theater’s Sunset series, the band will be joined by special guest Roopa Mahadevan, a New York-based Indian classical singer known for her work in jazz. , R&B, soul and world music settings.

Krishnamurthy kicks off the fall concert season with a duet recital at 5 p.m. on September 18 at Chabot College with Vishnu Ramaprasad on navtar, a redesigned guitar that can navigate through microtonal intervals.

The couple first teamed up last month in San Francisco for a performance at the Old First Concerts, “but I’ve known his parents for a long time,” Krishnamurthy said. “Vishnu’s father is a well-known carnatic singer in India, and his mother is a well-known dancer. We just hooked up recently and he plays this really interesting pumped up guitar with some nice strings.

Part of what makes the Alaya Project so rich in creative exchange is that it expands on a conversation that Krishnamurthy and Radhakrishnan began as children of Indian immigrants. Krishnamurthy grew up mostly in southwestern Michigan while Radhakrishnan is from Phoenix. They first met in 1997 while attending the Cleveland Thyagaraja Festival, the largest Carnatic music festival outside of India.

“It’s a hub for South Indians from across North America, with competitions for young people and performances from today’s top artists,” said Radhakrishnan, 40. “Rohan and I jammed a few times. He joined me on several performances and we were called by a prominent Bharatanatyam dance performer and opened for her, our first special concert together.

They stayed in touch and often played together as their commitment to Carnatic music deepened. Krishnamurthy became a disciple of Chennai maestro Guruvayur Dorai, the greatest master of the two-headed mridangam drum, and later studied drums with jazz expert Alan Hall at the California Jazz Conservatory. Similarly, Radhakrishnan regularly traveled to India as a disciple of Carnatic saxophone pioneer “Padmashri” Kadri Gopalnath.

Radhakrishnan moved to the Bay Area in 2005 and founded VidyA, an innovative Carnatic jazz ensemble built on the powerful rhythm section of bassist David Ewell and drummer Sameer Gupta (who went on to found the influential Brooklyn collective Raga Massive in New York). ). After earning a doctorate in ethnomusicology from the Eastman School of Music, Krishnamurthy also made the trip west in 2013, and the time seemed right to pursue a deeper collaboration.

The UnderCover Presents concert provided the ideal vehicle, but it was Colin Hogan’s work on piano and accordion that gave the Alaya project its protean strength. Coming from a family of musical explorers, his parents were founding members of the famous East Bay gamelan ensemble, Gamelan Sekar Jaya. His two siblings are also esteemed musicians and they perform regularly as the Hogan Brothers, holding a monthly residency last Friday at Jupiter in Berkeley.

Hogan doesn’t have extensive Carnatic training, “but he has a wonderful ear,” Krishnamurthy said. “When we focus on a raga, it comes to the fore and brings natural harmonies like a pianist would harmonize a melody. It will play what sounds good with that raga, or it will bring a jazz or flamenco tune, which will just bring something else entirely.