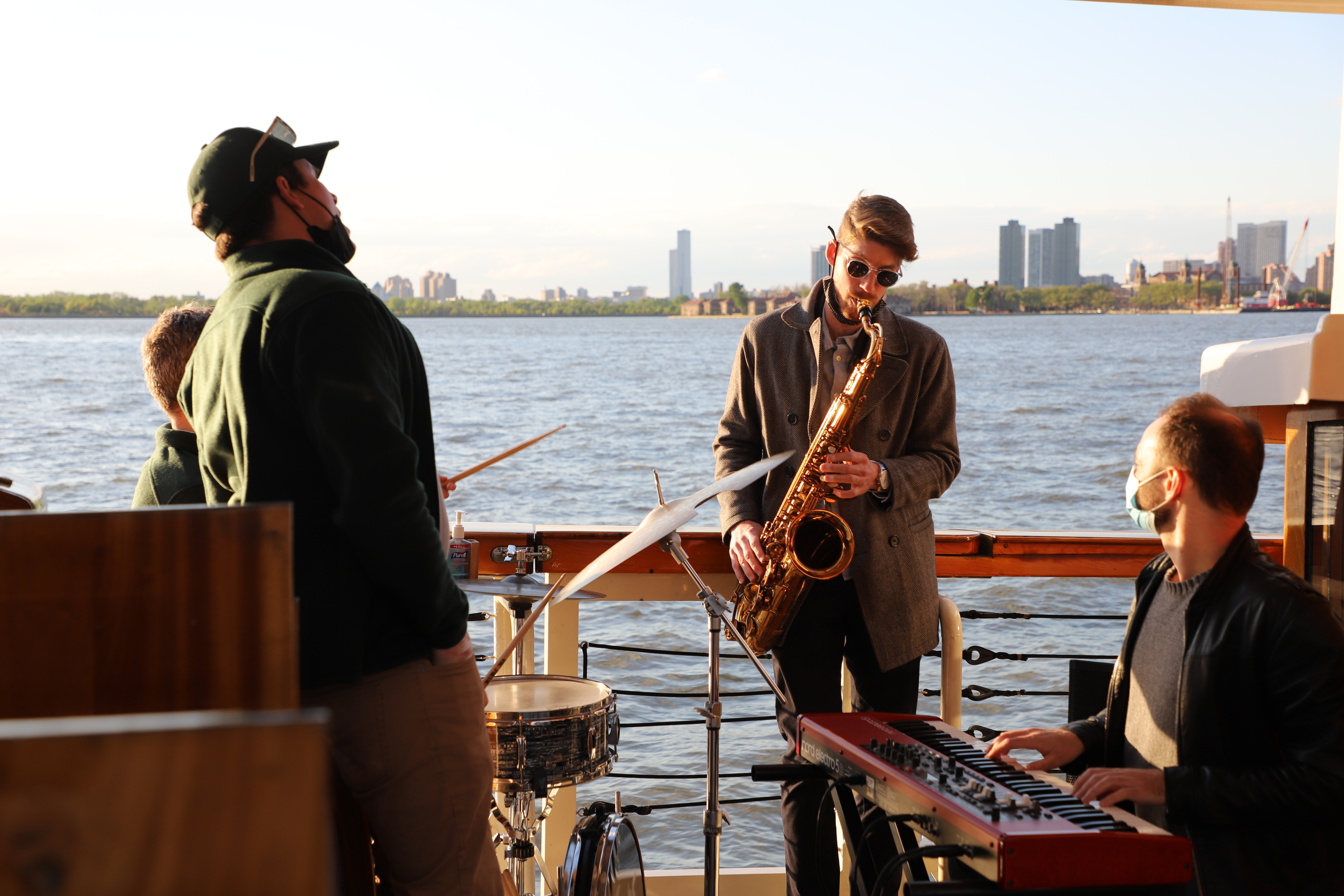 Tuesday night I found myself in the middle of the Hudson River, somewhere I never imagined I would be. The sun had just started to set and the water was a bit choppy with thunderstorm clouds rolling over Lower Manhattan.

Fortunately, I was on a yacht safe and sound. I was aboard the Classic Harbor Line Manhattan Evening Jazz Cruise, a 1.5-hour sunset cruise with live jazz.

The evening began by taking a seat inside the 1920s-style Manhattan yacht – made very comfortable with large pillows and corner tables – and ordering a glass of champagne, which was included in the ticket price ( each receives a beer, a glass of sparkling wine / still wine, soft drink, still or sparkling water from the house).

We quickly started circling the island, heading south, to the sound of live jazz from the Boat Band, led by Michael McGarril on starboard.

There were about 10 couples on board the yacht, which was covered with windows you could open and skylights that let in the sun. I had never been so close to the water in the river before, but even so we didn’t risk getting wet. Even the clouds that threatened rain before we left at 6.30am had moved away.

Passing the western part of Manhattan, we saw the new Little Island and its as yet unveiled amphitheater, the imposing One World Trade tower, sailboats soaring peacefully and the many skyscrapers of Jersey City. As the sun sank in the sky, light bounced off different buildings, especially the Empire State Building, which appeared to shine like a torch in the sky.

As we took in the views and sipped our drinks, the Boat Band (which included Dustin Kaufman on drums and Christian Nourijanian on keyboards) performed jazz standards from the 1990s, including a Billy Joel tune on which one members of the ship’s staff sang, impressing the guests.

Before we knew it, we stumbled upon the Statue of Liberty. I forgot how massive it is. It is rare to get so close to her when not taking a ferry to Liberty Island, especially for a New York resident. When we reached her in her green glory just after 7pm the sun was setting right behind her and we were treated to an incredible view.

The cruise was fantastic, not just because of the views and the champagne, but because it gave me a magnified view of my beloved city. There was also a certain camaraderie among the people on the water, from the yacht crew to the musicians and even those already on the water. The people who were sailing with Hudson River Community Sailing even waved to us and danced to our jazz music.

I asked Michael McGarril, the conductor and saxophonist, what it is like to play a concert while moving on the water and he told me that he and his comrades must be very versatile to play. on these yachts because every trip is different. Sometimes they’re on a different yacht and sometimes there are heavier waves that rock the drums a bit.

“You get used to it,” he told us. “It’s just preparation and balancing things out. We’re lucky to be able to play like that.”

I could get used to it too.

To have your own little jazz evening cruise, tickets are $ 104 per person for two to three people or $ 86 per person for four or more, Tuesday, Thursday, Saturday and Sunday evenings in May. (However, Sunday will not be offered in June). The departure times depend on the time of sunset, but are usually either at 6.30 p.m. or at 7 p.m., sometimes with 6 p.m.

Starting Saturday, June 5, Classic Harbor Line’s live Jazz City Lights or Sunset Sail begins in New York Harbor. For this trip, the Live Jazz Sailing departs at 6:45 p.m. for a two-hour jaunt to the tip of Manhattan on Tuesdays and Thursdays. It is $ 96 per person, including a drink. The 1.5-hour City Lights Jazz Sail takes place on Saturdays at 9:15 p.m. and costs $ 78 per person and also includes a drink. You can book your trip at classicharborline.com or call the Classic Harbor Line NYC phone number (212) 627-1825.