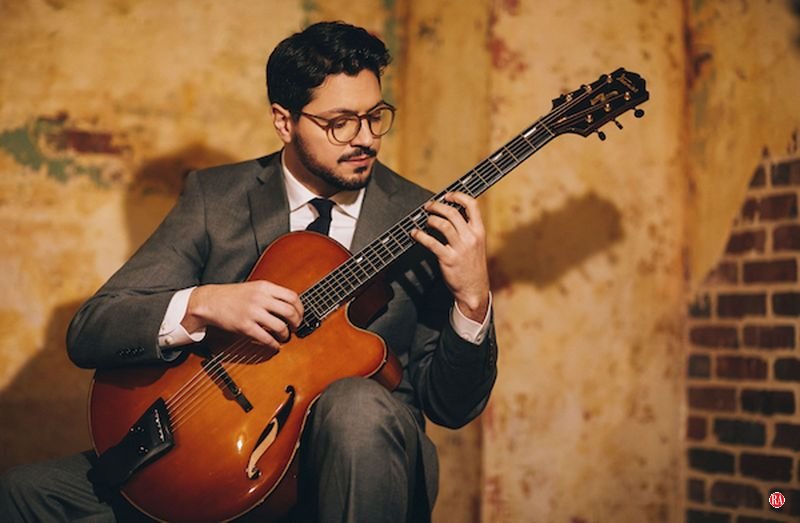 Like his younger colleague Joy, Grasso started early in music, but with a twist.

While she followed tradition closely with gospel, he used elements of piano performance to flavor his guitar compositions.

Born in October 1988 in the lush town of Ariano Irpino, Italy, Grasso was destined to thrive in music.

His parents, although not professional musicians, made sure to instill their passion for music in their children by filling their home with jazz and classical melodies. Young Grasso and his brother Luigi were also touched by the live jazz played at the nearby Umbrian Jazz Festival, an annual event since 1973.

Grasso wouldn’t fall completely in love with jazz until a guitar caught his eye while visiting a local music store near his home.

His father made him a deal before buying the instrument. “If I buy you this,” he said, “you have to promise me you’ll practice.”

Grasso did, and he quickly became a promising player on the instrument.

Grasso began to develop his own technique under the tutelage of Agostino DiGiorgio, a New York guitarist who was a student of famed guitarist Chuck Wayne. DiGiorgio passed on Wayne’s unique concepts with scales and chords to Grasso, but Grasso would not develop his own guitar technique until he met Barry Harris.

Harris, a world-renowned jazz teacher and bebop piano master, was an extraordinary influence on Grasso, who attended Harris’ jazz workshop in Switzerland in 1998. Under Harris’s wing, Grasso defined so well his technique and perspective on jazz that he became a Harris Teaching Assistant at workshops in Italy, Switzerland, France, Spain, the Netherlands and Slovenia.

However, Grasso’s approach to music would change dramatically after an “aha” moment inspired by listening to classical guitarist David Russell.

“I was shocked because of the incredible sound and feel and the way he played,” he recalled in an interview with JazzTimes.com. “I thought I should study classical guitar to really learn the instrument. Jazz guitarists play chords or play melody, but classical guys play chords and melody together – like a piano, like a small orchestra. I said to myself: “That’s exactly what I want to do with jazz. My technique was good, but something was missing.

Inspired by and combining the techniques of Wayne and Harris, Grasso quickly made a name for himself after moving to New York in 2012, where he became a member of the Ari Roland Quartet and the Chris Byars Quartet. He was later named a jazz ambassador in a program sponsored by the US State Department, which traveled Europe from Lithuania to Cyprus.

Asked by a writer for Vintage Guitar magazine to name a few young musicians who have impressed him, Metheny said, “The best guitarist I’ve possibly heard in my entire life is floating around now, Pasquale Grasso. … He kind of captured the essence of that piano-to-guitar language in a way that almost no one has ever approached. He’s the most important new guy I’ve heard from in many, many years.

Today, at 33, Grasso most often teaches the next generation of jazz musicians or performs around the world.