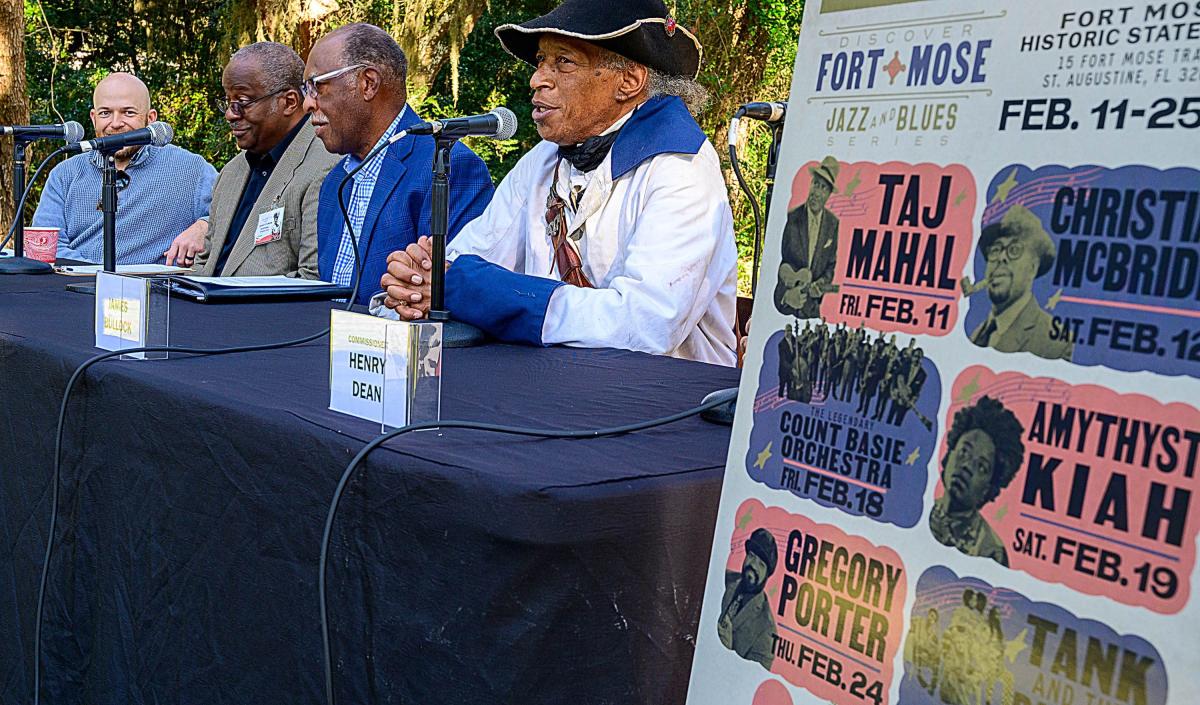 Grammy-winning artists come together to fundraise for Fort Mose in St. Augustine and raise awareness of the site’s significance with a jazz and blues series in February in St. Augustine.

Officials made the announcement Wednesday morning at Fort Mose Historic State Park, the site of the first free and legally sanctioned African settlement in what would become the United States.

“They fled south on foot to Spanish St. Augustine, crossing swamps and dense tropical forests. Along the way, they enlisted the help of the locals, creating the first ‘underground railroad’,” according to the Fort Mose Historical Society. “Not all of them survived. Those who reached St. Augustine obtained asylum from the Spanish government.

Historical re-enactor James Bullock said at the press conference: “For a lot of people it was a destination they risked everything to get to.”

Where the story lives: Event celebrates the history – and future – of St. Augustine’s Fort Mose

For years, supporters of Fort Mose have tried to raise funds to build a depiction of a fort that once stood on the grounds.

To support this effort and bring more attention to the site, the Fort Mose field will host several acts from February 11 to 25 as part of the Fort Mose Jazz and Blues series:

Tickets will go on sale at 10 a.m. Friday at the St. Augustine Amphitheater Box Office, Ticketmaster and on the event’s website, Discoverfortmose.com. Prices range from $ 40 to $ 120 per ticket.

City Manager John Regan offered the city’s help in providing parking and shuttles for the events, and he invited officials to make a presentation to the city committee on the event.

James Oglethorpe captured Fort Mose in 1740 and the inhabitants of the fort were evacuated to the city. The Fort Mose militia returned and defeated Oglethorpe’s forces.

Despite the victory, the Spaniards abandon the first Fort Mose and allow the inhabitants of the fort to live in the city. About 12 years later, the Spaniards forced black residents to rebuild Fort Mose on a new site to the north, the remains of which have been uncovered by archaeological excavations.

Fort Mose’s second settlement lasted until Spain gave Florida to Britain and the residents of Fort Mose left for Cuba, according to the park service.

Today, Fort Mose Historic State Park includes a history museum on approximately 40 acres. But there is no visible vestige of a fort.

Visitors often wonder where the fort is located, Fort Mose officials said at the press conference. The depiction of the fort would be used to help tell the story of the site.

Jackson explained how the land was saved from development and turned into a state park, and how it gained national and international recognition.

The site is designated by the United Nations Educational, Scientific and Cultural Organization as the Slave Route Project Memorial Site. It is also on the National Register of Historic Places and the Florida African American History Trail, according to the Florida State Parks Foundation.

Pellicer said that many of the artists who will perform are familiar with the history of Fort Mose.

Pellicer shared a quote from Scotty Barnhart, director of the Count Basie Orchestra, after asking Barnhart if he was interested in participating.

“He said, ‘Fort Mose is one of the most important places in American history and especially African American history,” Pellicer said. “It represents the ideals of freedom, democracy and the aspirations of people to live their lives to the fullest and participate in a society with all the rights and privileges accorded to them as equal human beings. Their story is all of us. Their story is what jazz music represents: the willingness to work hard to help make our community a better place for all. “