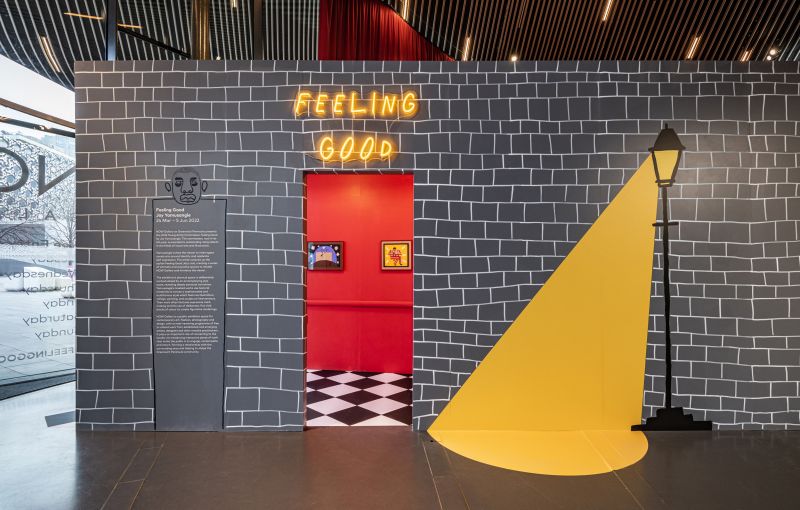 Until June 5, Feeling Good is the NOW Gallery’s commission for young artists of 2022. The venue, part of the ongoing regeneration of the Greenwich Peninsula, has undergone a striking visual overhaul that will turns it into a fictional jazz club. The walls are even adorned with a series of paintings on paper and fabric that are inspired by conversations and fleeting moments inside the club.

In addition to capturing the vibe of retro jazz clubs, Feeling Good is also a symbol of genre euphoria. It speaks specifically to Yamusangie’s own experience with understanding and celebrating her trans identity and her journey in learning music.

As part of Yamusangie’s deeply autobiographical practice, bright colors and vibrant self-portraiture take center stage, and Feeling Good is no exception. Operating as a distinct act of self-appreciation, while recognizing other core elements such as memory and community, Yamusangie is able to explore the Congolese diaspora from a very personal perspective.

The artist’s explorations of race, identity and representation also stem from a place of intimacy, as they investigate socio-political issues within the microcosm of their own community.

“I was inspired by the main character in Jackie Kay’s book Trumpet, which I later learned was based on the real-life story of musician Billy Tipton,” Yamusangie says. “Thinking about how music, especially jazz, has allowed both fictional character and real-life musician Billy to find a home.”

NOW Gallery curator Kaia Charles adds, “The appeal of this exhibition is the subtle dialogue between Yamusangie’s artwork, jazz notes, and the living and fictional spaces these elements inhabit. The work beautifully recounts the artist’s personal journey, while creating truly emotive spaces that will resonate widely.”

Yamusangie’s previous projects have included a public art installation commissioned by Tate Collectives, the London Borough of Culture award and the cover of the 2021 Penguin edition of CLR James’ Minty Alley.

Joy’s work has also been selected for the RA Summer Show 2021. Their work has collaborated with a number of influential brands including Paul Smith and Gucci.