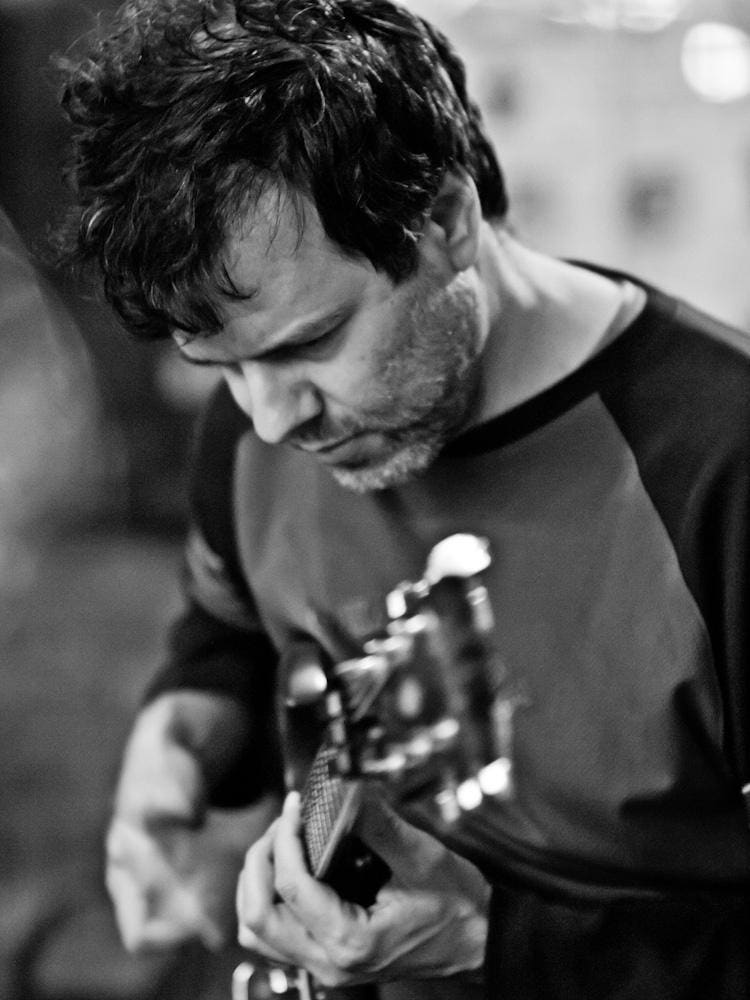 Eyal Maoz has been an active musician in New York for over 20 years and has observed the evolution of the city’s music scene over the years. His music is more than jazz, as it incorporates avant-garde, electronics and what he calls “a radical Jewish-Middle Eastern sound”.

Maoz is known for producing an eccentric electric guitar sound range and a distinctive improvisational style. Listen to the jazz-rock-fusion-Middle Eastern albums Edom and Hope and Destruction (Tzadik Records), or the soulful intensity of the duo The Lie Detectors (Chant Records) and it’s not hard to see why it’s considered as an instrumental voice in the instrumental music scene.

He is a member of MacArthur Fellow composer John Zorn’s Cobra Ensemble, who called Maoz “a vital member of the downtown New York scene.” As part of the city’s zeitgeist of experimental music, he helped redefine the underground of ethnocentric world fusion music and conducts a number of ensembles, including a group called Edom (a Middle Eastern meets pop mixed with a downtown sound), Dimyon (a modern Jewish acoustic band) and Hypercolor (a jazzy art-rock trio with Lukas Ligeti).

Maoz recently released an album, Transliminal Rites, with Orenda Records this month, where he performs alongside Grammy Award-winning musician Frank London and live electronics composer Guy Barash. This new record is what the group calls “informed by rock, modern classical and jazz”.

With the next recordings of Maoz, for his Edom and Hypercolor ensembles due in 2022, he looks back on the last 20 years and talks about his collaboration with John Medeski and the New York music scene.

How did you meet John Zorn?

Eyal Maoz: Collaborators and mutual friends. I collaborated with the amazing bassist and producer Shanir Blumenkranz who worked a lot with Zorn. He introduced me to John, who loved my music and was interested in releasing it on Tzadik.

How did your music change after you moved to New York?

I was heavily influenced by the free improvisation scene in New York City, which emphasized the use of any type of sound as a musical vocabulary of expression. Thanks to this idea, I also developed my non-traditional guitar effects and my choice of loops, which leads to complex (and crazy) sounds. I also started to develop my own style of Jewish inspired melodies. This branch of compositions was then used in my groups Edom and Dimyon, as well as in my solo guitar works.

How have you seen the downtown jazz scene evolve since the early 2000s?

I think until then New York is still the best place for musicians to explore. It is very easy to form musical groups here and organize sessions with many enthusiastic professional musicians. It’s still a creative musicians’ paradise, I think.

How do you keep your musical roots in your compositions as a musician of Israeli origin?

Everything that is rooted in me comes out, hopefully. When musical ideas come to my mind, I try to put them on paper, or at least on a tape recorder, and create complete compositions to perform or record later.

Unbelievable. I was very happy that he was in my music. We managed Edom’s first album in one day of recording, without any rehearsals! and it went extremely well. What a great experience.

What new territory did you explore on your last record, “Transliminal Rites? ”

This latest version is a creation of free improvisation at its extreme. It’s not easy to find improv sessions you love, but this one captured the essence of living in the moment and embracing all the beautiful (and wild) sounds that come along.

What can we expect to hear on your next releases in 2022 with recordings of works with his Edom and Hypercolor ensembles?

I hope to finish mixing the two recordings with Edom and Hypercolor, as well as a brand new recording I just made in Israel of a new / old experimental punk project (with Shanir Blumenkranz and Israeli drummer Shahar Haziza). Once the master is finished, we will find the label.