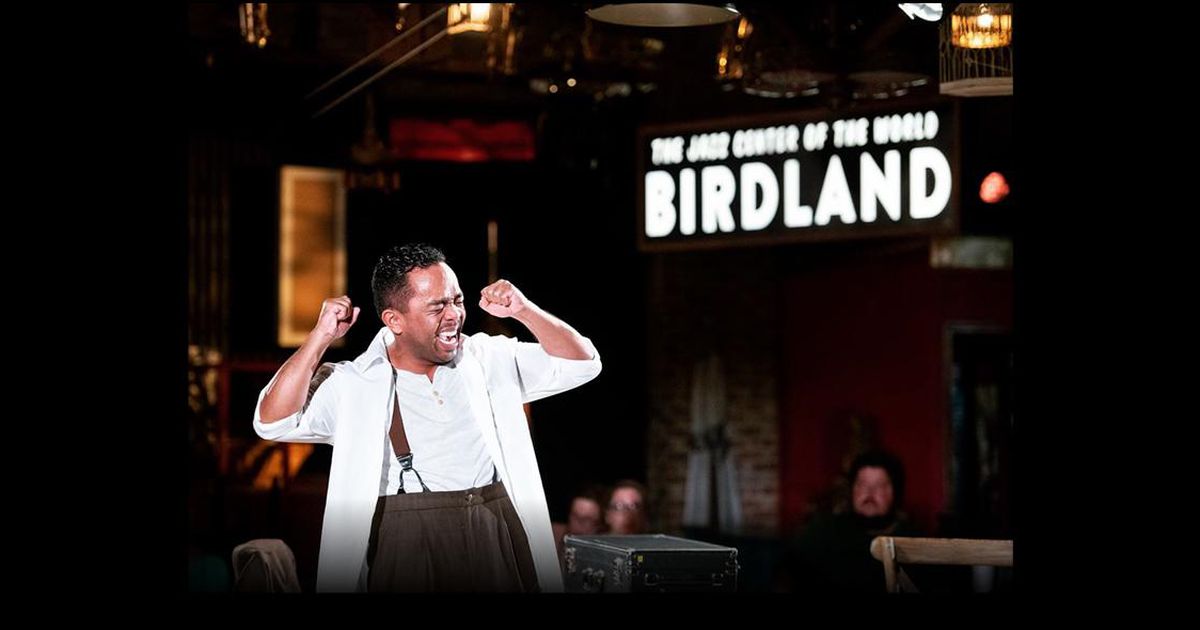 Guest conductor Clinton Smith, returning to Dayton once again to conduct the Dayton Philharmonic Orchestra in the pit, oversees his third production of “Yardbird.” He is delighted to return to the material, particularly praising its variety.

“You’ll hear jazz, swing, bebop, ragtime, big band, and even an authentic New Orleans funeral march,” Smith said. “There are so many different styles of music swirling around Charlie Parker’s life that the composer has incorporated into the piece. There are a few quotes from Parker’s music, but there’s also a landscape of what the music would have been like in his ear at the time.

Hailed by Opera News as a “vocally charismatic” performer with a “golden tenor”, Yellow Springs native Bakari says he embraces the weight of Parker’s historical significance but is resolute in his intention to deliver a performance of its own.

“Representing Charlie Parker is a truly titanic feat because he’s someone who is so revered and so loved by so many people, myself included, so there’s a lot of pressure,” said Bakari, a graduate of the Yellow Springs High School in 2005. “People not only see him as some kind of divine figure in terms of what he’s been able to bring to music, but there are also photos and videos of him performing and speaking. So there’s a certain obligation that I have to be true to him, not just as a personality but as a physique, but also at the same time there’s a need for me to infuse enough of myself into it. to make it feel authentic to me so that it’s more than just an imitation and the interpretation has depth and nuance.

Bakari, whose previous credits include Count Almaviva in “The Barber of Seville” and Goro in “Madama Butterfly,” also recognizes the vocal demands of the role.

“Music is extremely difficult,” he said. “Not only is Charlie Parker’s role a marathon – for about 90 to 100 minutes he hardly ever leaves the stage and hardly ever stops singing – the nature of the writing is very virtuosic and very elevated. That also requires a lot of agility.

Due to the cast consisting of performers who are both newcomers and veterans of the piece, Smith says he’s able to keep rehearsals fresh through the simple joy of rediscovery.

“There is always something new to discover,” he says. “We discover new tempos, new moments, new intentions and also dramatic discoveries. It’s a wonderful world to see an old friend again but discover something new.

The aforementioned A’Keen, whose work spans film, television and brand marketing, is also an associate director and choreographer. In 2018, he made his operatic debut as a choreographer and guest artist in Arizona Opera’s “Yardbird” production. He considers his movement a reflection of the history of jazz.

“It’s an opera about a jazz musician and there are riffs, there are times when we hear jazz musically from the orchestral composition, but that’s largely what we understand from a Eurocentric opera sound,” A’Keen said. “So my goal was to try to find a physicality that pulls on jazz dance, jazz music and jazz tempo, especially how to emphasize the bebop in the body.”

Trained in classical ballet and contemporary dance, A’Keen particularly appreciates the level of physicality in the production. He thinks it aligns with the triple threat qualities reminiscent of “Porgy and Bess.”

“The staging of this play is very physical in nature,” he said. “The full main cast, including the actors playing Chan Parker and Dizzy Gillespie, are very physical in this work in a way we don’t normally see in some types of operas except ‘Porgy and Bess’. in which the dancers are the actors are the singers.

Beyond movement, A’Keen is motivated as an associate director to explore Parker’s struggles as a black artist during difficult times.

“Charlie Parker, traveling the world in the 1930s, 40s and 50s, was challenged by the tensions of being a black man in predominantly white spaces who wanted his art but didn’t want him as a person” , did he declare. . “Walking into the back of restaurants and clubs, Parker had to entertain and be the genius, but then be dehumanized by not sharing the income he should have received for being such a prolific musician. We want to show the humanity , the complexity of a genius.

In her second season as artistic director, Clawson regards “Yardbird” as a perfect example of an opera striving to be a vibrant melting pot of representation and universality.

“Opera is a living, breathing art form,” she said. “The opera is not a museum piece. We continue to tell new stories. My core belief is that every voice matters. Everyone’s story – young, old, every ethnicity – should be reflected and represented in the opera. And as a corollary to that, the scene must look like the world. It’s important to me that people come to Dayton Opera and see someone who looks like them on stage.

HOW TO GET THERE

FOR YOUR INFORMATION: Performed in English with English surtitles, the opera has a duration of 1 hour and 45 minutes without intermission. It is recommended for ages 12 and up with parental discretion and includes references to drug use.

a whirlwind of jazz age joy and sorrow