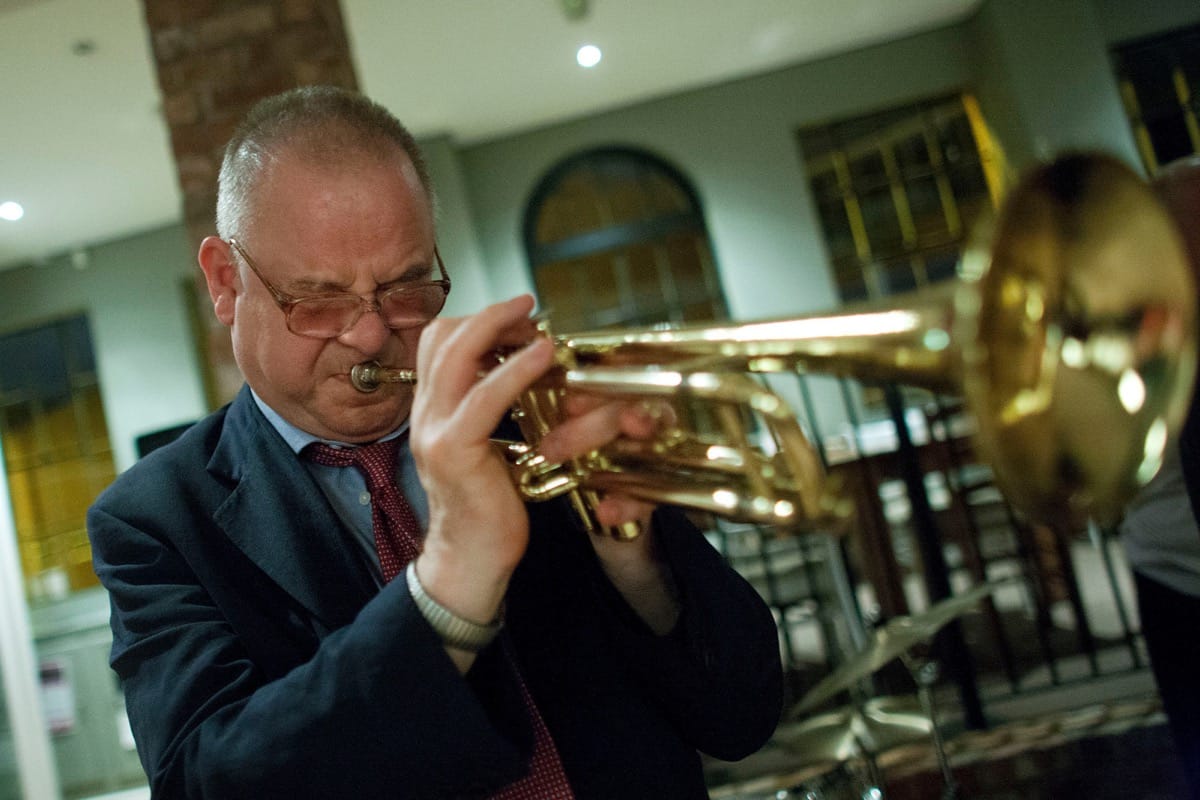 I had John McLaughlin and YouTube to thank at the end of 2020 – the pandemic’s first “annus horribilis” – for drawing my attention to the Jazz Foundation of America’s Covid-19 Fund. Since I wrote about jazz on YouTube in a print issue of Jazz Review, back in Gutenberg’s Mesozoic, the number of extracts of jazz films on the site and the viewers who access it seem to have increased by a thousand. There are connections.

McLaughlin, sunburned and leonine, presented the DIY concert, which he associated with a call to donate to the fund. (The fact that McLaughlin was a British musician and his call was in response to an American call simply illustrated how the internationalism of jazz makes the cardinal points out of control). The long established 4th Dimension, he said, was a family, but it was for the great family of humanity.

One of the goals of the JFA is to help musicians in times of crisis. Even in non-pandemic times, this largesse spills over into a larger and larger community, as musicians age or fall ill and depend on the Foundation and the like for their daily sustenance. Pandemic-like phenomena (i.e. nasty things that come out of the night), just added to the routine woes of unsung musicians in New Orleans when they took the form of the Hurricane Katrina. Jazz musicians everywhere often live on the edge, with little job security and only have access to scattered personal savings. The Covid-19 Musicians Emergency Fund was established to help an unexpected new wave of people in need of help for themselves and their families, as they faced hardships. Clubs have closed and festivals have been canceled. It is sinister. As we all know.

I write about McLaughlin’s video in the past tense, but it’s still visible – the last time I watched it had been seen by almost 8,000 people. This is a bonus in terms of the immortality of objects on the Internet. The pandemic is by definition global. As early as last September, the All Party Parliamentary Jazz Appreciation Group (APPG) in Westminster published an article by its secretariat, Chris Hodgkins (in which he is assisted by Louis Flood, Ali Bland and Aoife Forbes), reinforcing the conclusions of the Digital Select Committee. Culture, Media and Sport on the impact of the Covid in the areas for which he was responsible. It highlighted the inadequacy of funding and the difficulties encountered by independent jazz musicians and promoters in accessing financial assistance. The APPJ, backed by Hodgkins’ impressive and detailed research, continues to lobby for jazz and its musicians, especially where the pandemic has seriously affected their lives (www.appjag.org).

But it would take more than a raging virus to shut down jazz altogether. The musicians are built of bricks. Despite Covid’s knockouts, there was a mass rising from the web, and the musicians were shaken but agitated as activities resumed in one form or another; although a musician told me that if you were going to play for a TV commercial for Curly-Wurlys, it was likely that that too would have dried up. The annual APPG awards were held this year, recognizing the difficulties in introducing a new category for innovation in lockdown. Pianist Liam Noble won with his Sunday Lockdown Live sessions, although the other three nominees – Joe Stilgoe, Adrian Cox and the Globe, Newcastle – tended to digitally obscure other innovators who did not make the selection or may. -be for some reason were not nominated.

I can’t help but think, however, that Lockdown Blues is a universe away from the ragged-ass Delta blues musicians of yesteryear, crawling from place to place and barely able to regard music as their main source of income. Without them and others like them, there might not have been jazz, nor jazz tradition to defend against the ravages of the plague. The blues is two things: a cry from the depths and a musical sequence of 12 bars [or 8½ or 16 or whatever they chose – ed]. It is possible to play the latter by occupying a penthouse in Manhattan, well above the pandemic of poverty. But only a fool would insist on poverty as a condition of the authentic. Pandemics must end, not continue.

While the lifting of the lockdown and other restrictions can give the appearance of a new normal (when what we want is the return of the old), there can be hidden damage, especially to jazz musicians. Perhaps most telling will be the torpor that Covid has induced in many of us, especially that associated with having to stay indoors, not only to avoid infection, but because it doesn’t happen. nothing we would normally get out of the chair for to assist. When we return from festivals and club events, will we want to support them?

This can be an acute problem for jazz clubs across the country. If, within reason, every paying member of every club showed up at every concert, the clubs would be better off anyway. This does not always happen. It’s not because of apathy – well, in part – but because members think their support ends with paying for their annual subscriptions. There is nothing worse for a musician than playing for an audience whose numbers are almost smaller than the band.

Two jazz festivals near me in the Black Mountains, in addition to triumphing over lockdown, can, like other events of the genre, turn access to jazz performances via streaming into a permanent medium. Last year, Black Mountain Jazz’s Brecon and Wall2Wall offered paid music streaming, the first provided by the gigantic French online streaming company Vialma and the second by 47 Studios & Productions of Abergavenny. Last year, BMJ filmed the festival artists at his club and paid them “live” performance fees; this year, the acts were filmed in the same way but the musicians stayed to give paid concerts in the evening in front of a small audience in a countryside location. The filmed concerts will be shown at the festival itself in October.

Vialma is a subscription service that caters to all tastes in music, not just jazz. It’s like YouTube, but you pay for it. You are also paying for bespoke high definition sound and recording, which YouTube, depending on the quality of downloads from various hands, cannot always provide or guarantee. The advantage of YouTube is its historical reach: the ability to browse immense amounts of television, film and other material since the days when a fertilized egg was about to become John Logie Baird.

Why will jazz streaming become permanent? Because it is music for generations of TV, who do not fear self-imposed “confinements” and who are already downloading cataracts of music to listen to. Streaming companies will also be required to provide full catalogs of what they are offering. The battle has begun. Interesting moments.

Jazz on YouTube continues to arrive at pandemic speed, but with very beneficial consequences. My brochure of related stories, A Gloucester trilogy (Templar Fiction) includes one that considers that between the time celebrities died and the cinema was in its infancy.

There is, for example, no known footage of DH Lawrence, although photographs of him abound. Dylan Thomas may or may not have been shot in the background on Pendine Sands in West Wales as an extra in a Hollywood movie; the sequence is brief, is part of a family film and identification is difficult. But that’s all.

I am now looking on YouTube for the movie of any jazz musician that I have never seen move. The most recent was the French saxophonist Barney Wilen, a tenor whom I greatly admire (American musicians too) and who died at the age of 59 in Paris in 1996. I have found some extracts from him, in particular a French television jazz show broadcast from Club St Germain, in which he appears alongside Clark Terry, Kenny Clarke, Pierre Michelot, and – Bud Powell. I then wondered if there were any other longer footage of Powell that surprised him in his prime. After discovering an hour-long TV documentary called Inner Exile, and Jørgen Leth’s 12-minute lyrics, Stopforbud, I realized that it was late Powell and that if someone gave him the honor of a homage while he was still living – in a precarious way – he would be the French. Powell’s game soundtrack is worth looking for visuals, however. Even in decline, he was at times incomparable, like a torch lit by an otherwise dying battery in momentary super-luminosity.

Legends of Double Bass in Jazz ‘- News, reviews, articles and commentary from the London jazz scene and beyond

The founder of the Newport Jazz Festival, George Wein, has passed away. –…