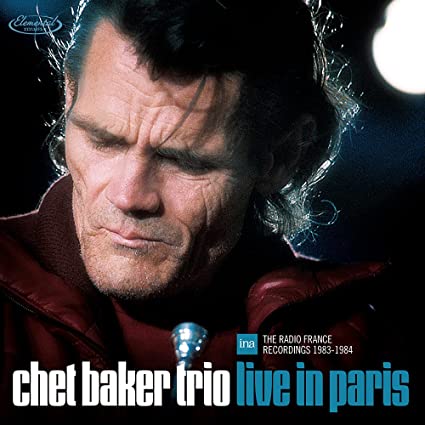 On the labels of this beautiful triple vinyl set, the font makes the artist credit look like “Chet Baker Brio”. Which is good because these are lively and rewarding sessions from the trumpeter of the fall of his career, consisting of two recorded live concerts, of admirable clarity and purity, under the impetus of André Francis of the ‘ORTF (today Radio France), on June 17, 1983 at the Esplanade de La Défense as part of a festival there, and for their program “Le Jazz Club” at the Petit Opportun in the center of Paris on the 7 February 1984.

Beyond the most obvious things Chet Baker was famous for – his music, his early morning idol appearance, his drug use – he also went down in jazz history for the quip, “It takes a very good drummer to be better than no drummer in the everything.” It’s a pretty cruel epigram, but it wasn’t just ideological – or musicological – motivated.

Because in that last decade of his life, the 1980s, Chet Baker was playing and recording mostly in Europe and he preferred a streamlined pack-a-suitcase-and-go set to tour with, and he didn’t was no question of taking a battery out. Indeed he often goes on the road with the guitarist Nicola Stilo.

But here the trio brilliantly is composed of Baker, pianist Michael Graillier – with Dominique Lemerle on the plateau of La Défense and Ricardo Del Fra on bass at the Petit Oportun. The absence of a drum gives their music a supple, floating sound; not anchored in a positive sense, as on the extended oceanic rise and fall of tree pathwhich weighs in at over 18 minutes and takes up an entire side of the vinyl platter.

Chet Baker’s releases from this late period are frequently dismissed and denigrated, in part because he is overrepresented on records, some of which are certainly not classics (although others most certainly are, such as The legacy with the NDR Big Band). But there often seems to be almost personal anger at Baker for the loss of his looks and the deterioration of his voice as well.

And it’s true that this set features Chet, who is no longer pretty, even haggard and has dental issues, and his singing is definitely not the best thing here. But, personally, I’ve always found Chet Baker’s voice (warning of heresy) – even at Sputnik’s height of 1950s popularity – rather monochromatic and muted, though his sense of timing is never less than good. . In other words, he wasn’t Frank Sinatra or Mark Murphy. And while he wasn’t Miles Davis either, he was one of the few trumpeters that the notoriously caustic Davis rated.

In this last phase of Baker’s history, a crucial figure was the Belgian Jacques Pelzer, an avid admirer and jazz enthusiast who combined the alto sax (“a local Charlie Parker”[*]) with the management of a pharmacy from his home in Liège. It would be hard to conceive of a more perfect friend for the trumpeter and indeed, “Baker kept a key to the house which became his refuge for the rest of his life.”

But more importantly, Pelzer was stepfather to Michael Graillier, who became one of Baker’s favorite pianists and is unquestionably a hero of these recordings. Indeed, it is Graillier’s fluid playing that is likely to be the first thing that strikes the listener, exploring the tunes with his elaborate encircling dexterity as he does onStella by Starlight . The trendy side and the incisive precision of Funk in Deep Freeze

(a composition by Hank Mobley and an old Baker favourite) is another highlight of Graillier and indeed of the entire trio, with Riccardo Del Fra providing swinging backing and Baker’s impossibly minimal and beautifully judged interventions. Horace Silver To stroll emphasizes what a great session and band it was. Del Fra’s understated bass is like an ever-rolling red carpet beneath the growing inventiveness of Michael Graillier’s hugely engaging piano and Baker’s commentary is warm and highly descriptive. And the sweet and seductive Lament

(by JJ Johnson) features exquisite expressiveness from Graillier and touching depth of feeling from the entire trio, with Baker bittersweet and elegiac.

Available on both triple LPs and double CDs on Elemental Records, these treasured tapes were brought to life by Zev Feldman, who has an admirable track record of painstakingly reclaiming precious music from obscurity, often through releases on the Resonance label. The quotes in this article are taken from James Gavin’s dark but indispensable biography of Chet Baker,

Deep in a dream

NB: The date of the first session was June 17, 1983, a fact confirmed by the program Open Jazz de France-Musique when it was released, even if, on the very cover of the album, the date of July 17 also appears .