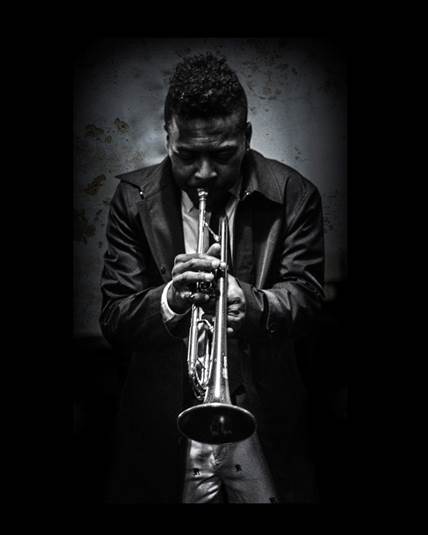 “Each photo is so evocative,” says Iris Gallery curator Jeremy Moss, “Each portrait in this exhibition tells its own story. You can really feel how the performer in the photo feels about her music.

Hilaire’s lifelong work has focused on capturing this relationship between images and sound. “He’s a purist,” says Moss, “His use of natural light makes his photographs so captivating.”

A resident of Maplewood for 25 years, Hilaire is known as the man behind the camera at many jazz events and has been a fixture on the local music scene for years. Hilaire has photographed artists from SOPAC’s Jazz & Blues series in the Loft and Giants of Jazz series as well as the Dizzy Gillespie All Star Band at Blue Note in New York. The self-taught Haitian-born photographer’s ability to capture captivating musical moments from great artists has earned him wide recognition. “Musical events are the intersection where the rhythm of the performer and the photographer meet,” says Hilaire.

As a daytime IT professional, live performance capture strikes the perfect balance. “Those are really moments that I try to capture, and those moments only happen once.”

A jazz lover since childhood, Hilaire was first touched by the genre when his older brother Max Hilaire, also a noted photographer, brought home The Glory of Love by Herbie Mann. Growing up, both sides of her family were involved in photography. As a teenager, he followed his brother as he developed films and printed black-and-white images in their parents’ basement. Jazz by WRVR, a much-loved now-defunct jazz radio station, played until the early hours. “Great jazz photography, especially album covers photographed by the masters, remains a constant inspiration,” he says.