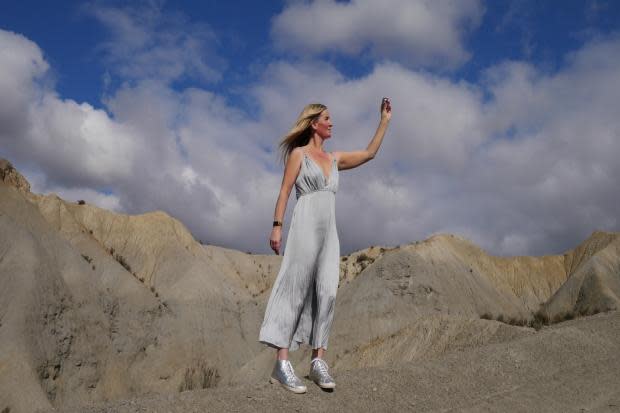 Northern Irish singer-songwriter Brona McVittie returns to her roots tonight with a gig in Oxford tonight.

The County Down singer, who has honed an engaging line in electronic folk inspired by Celtic traditions, performs tunes from the new album The Woman in the Moon, at the Jericho Tavern in Walton Street.

She says: “I lived in Oxford for three years when I studied biological sciences at St Hilda’s College. My husband also grew up in Oxford.

“And my very first gig was at the Bullingdon, when I was a student. I have some supporters here, good friends and family too.

The Woman in the Moon follows the acclaimed albums We Are the Wildlife and The Man in the Mountain.

It is accompanied by a mix of harp, transcendental melodies and rhythms from guest musicians Brazilian drummer Marius Rodrigues and jazz bassist Oli Hayhurst.

The jazz-influenced instrumentation continues Brona’s desire to present traditional and contemporary folk songs in new clothes. Alongside her own original compositions, she reinvents two well-known traditional Irish ballads: Star of the County Down and the Irish Gaelic song Tiocfaidh an Samhradh.

“The tour is better than expected,” she says. “I’ve almost used up all the CDs and haven’t gotten halfway there yet.

“I love live performances, especially when you know you have the audience in the palm of your hand.

“It’s a completely different discipline from recording, which I love too, but the reward of live outweighs the work in the studio.”

Brona is one of the best representatives of Celtic music.

“I don’t really feel obligated to share my culture, it’s more that I’m motivated to create and I’m influenced by traditional folk by immersing myself in it,” she says.

“I like playing with traditional songs, but my songwriting was born out of a need to express my emotions.

“It’s therapy. As far as my desire for the listener is concerned, it’s more about transporting it somewhere else, so it’s something spiritual, yes.

And she urged listeners to come to the concert upstairs at the Walton Street pub.

“Come down to the Jericho Tavern!” she says.

“You won’t be disappointed. The opening act will be a real treat, and I’m joined on stage by jazz bassist Oli Hayhurst (played with Pharaoh Sanders on his European tour), who also features on the new album.