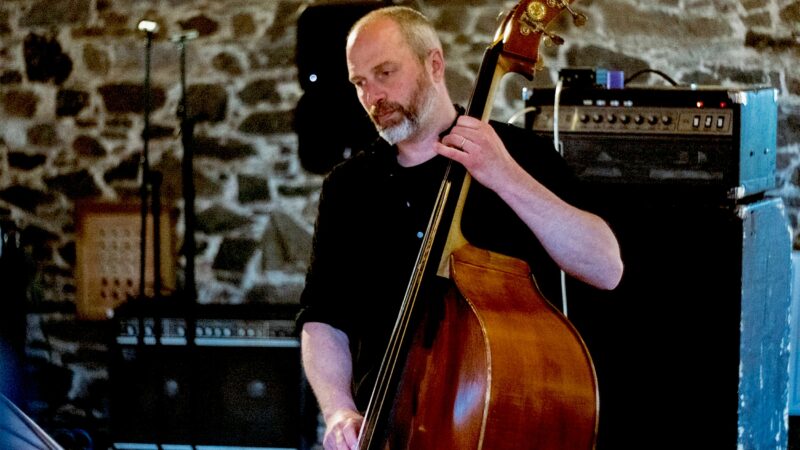 So it’s a bit of a saxophone party across the city this month, with a host of big-name visitors and some of our best local reed talent in the spotlight while tasty African grooves roll on in November too.

The sax-fest starts at the beginning of the month, starting with a Fringe in the round double bill including Greg Sterlingthe saxophone trio of Trinomika (Tuesday 1) as well as singer Victoria Klewin’s quartet collaboration with At Guy Shotton’s keyboards. It is followed by Paul Dunmalis back to Jazz Craving (Wed 2) with a fine quartet of improvisers including Liam Noblethe piano, John Edwards on bass and Mark Sander drumming. The following night (Thursday 3rd) St George’s sees the Scottish hero Tom Smith perform a solo while improvising ‘no wires‘ show exploring the acoustics of the building, then the night of the fireworks announces the great John Toussaint at the Bristol Beacon Foyer (Saturday 5). Toussaint’s 40-year career began in New York with the legendary Art Blakey’s Jazz Messengers but he later called England home where he collaborated with many of the UK‘s best over the years. The Bristol gig has a quintet of stars, including the brilliant trumpeter Freddie Gavita with Shane Forbes drumming.

It’s only the first week! Then there’s the Fringe Jazz favorite Iain Ballamy with his new quartet whose pianist Rebecca Nash (Fringe Jazz, Wed 9) before Bebop Club features an impressive young Scottish star Helen Kay (Thursday 10) with his quartet Golden Sands. The Bebop also hosts the viola player Luke Annesley (Thursday 17), famous for his free play and straight ahead, while a late change of schedule sees top young talent Xhosa Cole come to the Fringe Jazz (Wed 23) in a sparkling trio with Robert Mitchellthe piano and Mark Sander to the battery. The foot fleet might be able to rush from this gig to catch some of the no stop tenor player John Pratthe powerful quartet of JP4 at the canteen. The Bebop once again welcomes the Canadian saxophonist Terry Quiney (Thursday 24), this time alongside the guitarist Neil Burns Organ Trio with the former Bristol player Martin Jenkins back on Hammond then Fringe Jazz ends month with veteran reed player Alan Barnes (Wed 30) in partnership with the pianist David Newton – an empathetic collaboration that dates back to the late 70s. Young dynamic saxophonist Alex Merrit leads Sunday 6 session at Stag and Hounds while hard bopping Martin Kern takes the reins there on the 20th.

Bass player Riaan Vosloo (photo above) is part of Luke Annesley’s quartet but above all brings his own septet The Bustle of Riaan Vosloo at Fringe Jazz (sea 16) (with another couple of great saxophonists in Sam Crockat and Nick Dover). It’s a splendid celebration of the influx of exiled South African musicians and music onto the British scene in the 1960s and 1970s, introducing British audiences to their rich rhythmic styles and passionate playing. from Bristol Keith Tippet was an avid fan and active participant at the time and his compositions will feature alongside those of Dudu Pukwana, Chris McGregor and others. It’s the culmination of a lively sequence of Africa-derived events in Bristol, starting with two nights of Afrobeat from Dele Sosimi‘s band at Jam Jar (Fri 4, Sat 5) and then there are two West African Mandingo stars: Diabel Cissokho (Canteen, Fri 11) and N’famady Kouyate (Jam Jar, game 17). The North African grooves of the guembri animate Gnawa Blues All-Stars (Canteen, Fri. 18) while the master Ghanaian drummer Baraka by Ben Badoo (Canteen Sat 19) takes African and Caribbean rhythms and merges them with danceable jazz. There is a similar contemporary fusion in the sound of Hele (The Lightship, Fri. 25). But back to the Jam Jar, there’s a chance to catch the desert guitar supremo justin adams in collaboration with the Moroccan virtuoso Gnawa guimbri Mohamed Errabbaa (Sun 27) – a sparkling meeting of minds at the heart of an expanded line-up.

But back to jazz… flamboyant trumpeter hero Organ Trio by Jonny Bruce hit the Bebop (Thursday 3) the same night as the piano trio Yetis monthly Pizza Express-style session at the Greenbank, as the singer Karolina GriskuteThe trio sneaks into El Rincon (Fri 4). Trumpet Andy Hague’s Double Standards Quartet appears at the Tobacco Factory (Sun 6) on the same day as the classic jazz and swing outfit Bill Frampton Jazz Trio feature in Hare on the Hill (Sun 6). Longtime Celtic Jazz Mergers Carmine appear as a trio at El Rincon (Thursday 10) while the main man of ‘tapas Tardis’ pete judge will perform solo piano at St George’s (Thursday 10), as part of a double program with Three trapped tigers keyboardist Tom Rogerson also appearing solo. Pete’s third album of solo piano compositions has just been released – how does he find the time? swing singer lucie moon appears in the Stag & Hounds (Sun 13), gypsy swingsters Schmoozenberg are at the Jam Jar (Sun 20), and Jack Calloway’s band celebrate light swing-jazz at the Fringe (Thursday 24). A big draw, however, should be the excellent Nu Civilization Orchestra (Thursday 24, St George’s), a big band full of talent The warrior of tomorrow protégés exploring the jazz side of Joni Mitchellespecially his work with Charlie Mingus. Singer ESKA takes on vocal duties but, judging by their previous Marvin Gaye project, the Orchestra’s many musicians will be just as eye-catching. And while his electric ladyband big band became a guitarist Denny Ilette deserved applause across the country, he reaps again in the heart of Santarnal (wise use of an r there!), a brilliant 5-track latin-jazz-psychedelia centered piece from the big band Santana (mar 29, Mr Wolf’s). And Mr Wolf’s hosts a buzzing new residency later on Sundays as keyboard ace every week Dan Moore and electric mixer matt jones welcome a new guest for a session. They Baileyblues/jazz guitarist Joe Wilkins goes first (sun 20) followed by Snapback fretmeister Eli Jitsuto (Sun 27).

You’ll find some of the best musicians in town with a soul-jazz singer/songwriter Pete Josef (Tue 1, Strange Brew) and Neo-soul multi-instrumentalists Mellowmatic are in the canteen (Fri 4). Another big highlight of the month will be the set of Glasgow corto.altoled by the effervescent trombonist Liam Shortall (Thur 4, Lost Horizon) with amazing drummer Graham Costello just one of the star players in the group. Past Jam Jar appearances have been brilliant groove-focused showcases with the backing of Berlin’s ultra-hip outfit Moses Yoofee this visit should be a belt. In the same way, Pete Cunninghamit’s very successful Ishmael Set (Thursday the 10th, Trinity) have brought their fusion of jazz, soul and dance music to international audiences since the pandemic, becoming one of the nation’s finest and most popular contemporary jazz bands. Likewise, uber-cool vibes from across the Atlantic are promised when the Try Thoughts star Sly5thAve plays Lost Horizon (Thursday 17), mixing freedom jazz, funk energy and hip-hop discipline. London based saxophone trio Jagama (Jeudi 24, Cantine) make a sophisticated mix of jazz, prog and ambient music. More straight ahead (in that New Orleans style), the New York Marching Band will fill the Old Market Assembly with the energy of Mardi Gras (Friday the 25th). Having first attracted attention with his dazzling guitar work in Kokoroko, Oscar JeromeGeorge Benson’s influences shine through in his solo work with his own band (Tuesday 29, Trinity).