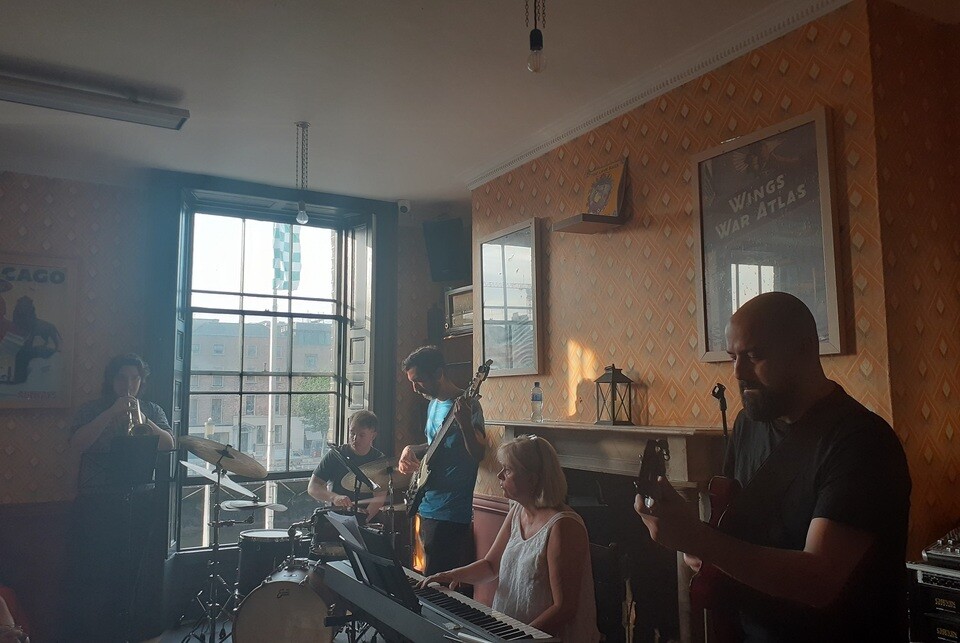 Miles Ronayne leans on his drums.

“Tempo?” he said, calling across the room to Johnny Batista, who thought for a moment before sounding a beat.

Ronayne lets his drumsticks ricochet off the snare drums, picking up the beat right away. Next to him, Alexandre Guerra pinches his bass guitar, and the three musicians settle into the melody.

The audience roars as Batista takes the lead, frowning in concentration as he strums his guitar. Heads nod along with the beat, heels click on the floor, hands on knees.

A breeze blows through the window of the Vintage Rooms, upstairs at the Workman’s Club on Wellington Quay, where the Jamam Jazz Quintet – now Adam Tait on trumpet and Mary Murphy on keyboard too – improvise.

Jamam are one of eight jazz bands performing here every Sunday for the rest of the summer, as part of the Kind of New series, organized by the Dublin Jazz Co-Op.

The groups in the Kind of New series are a mix of experienced jazz players, like Guerra and Batista, and newbies, and everyone in between says Emily O’Rourke, a jazz player who organizes the series.

It can be difficult for newcomers to make organic connections, she says, to meet other people to play with and get gigs.

“There are so many other professionals on the scene and they don’t know that this crazy new talent is literally lying and waiting in Dublin,” she says.

Tonight will be Murphy’s first-ever jazz concert, she says, moments before the start.

She stood in the knot of audience members. “A few friends of mine and my family also surprised me,” she said, smiling at her cousin.

She was an engineer for 30 years, she says. “And then I realized that I had had enough. The music was always there in the background.

The Kind of New series was spurred on by graduates of Dublin City University’s (DCU) BA Jazz and Contemporary Music course, who wanted a way to meet people outside of the university, says O’Rourke who organizes series.

Murphy, the former engineer, is in her second year of classes. “It’s very difficult, but I love it,” she says.

Batista worked as a jazz tutor and played in a trio for years in Brazil, he says. Once in Ireland, he studied on the DCU course to help him get gigs. “It was a good place to bond.”

Ronayne starts his final year of the DCU course in September, and after that he wants to go to New York. “I just want to get a little experience, you know, and that’s kind of the birthplace of a lot of these artists, you know?”

He played and listened to a lot of jazz growing up, drawing inspiration from his father’s record collection early on, he says. “My parents named me Miles after Miles Davis.”

O’Rourke says Kind of New is a pun kind of blue, Miles Davis’ record. And that signals to people that these are newcomers to the jazz scene, she says. “We just try to highlight it, to show people.”

Experienced musicians can also learn by playing with newcomers, she says. “It’s really exciting for them to kind of see their music take a new direction sometimes.”

Batiste is thrilled to play with the Jamam Jazz Quintet, he says, with some new people full of energy. “As we say in Brazil, they have blood on their eyes.”

Murphy, looking towards the stage where she will be performing soon, says the band has been supportive. “No one is given to you if you cannot do something.”

Learning the steps of preparing for a gig was also helpful. “You can’t change your game in three weeks or anything,” she says. “How chaotic it can be. Where can we rehearse, how do we rehearse?

A speck of setting sun glides across the patterned yellow wallpaper as the Jamam Jazz Quintet plays, skin glistening from the effort of playing.

Murphy articulates the beat as his fingers happily fly across the keyboard, tapping the notes of “Exactly Like You” by Oscar Peterson, his favorite jazz musician.

“I think he was the one who got me into jazz,” she told the room.

Outside the door to the Vintage Rooms during the break, Batista puts a hand on Ronayne’s shoulder. “I love this guy, he’s amazing.”

Batista wrote the arrangements and prepared the setlist for the Jamam Jazz Quintet, he says, with excerpts from classical jazz, contemporary Brazilian jazz and his own album. earthly justice.

“I used a rhythm that was very specific to Brazilian music, to a very specific part of Brazil too,” he says. It’s a faster tempo, with a complicated rhythm, he says.

Ronayne has played Brazilian jazz before, says Batista. “That’s why I wrote the arrangement for this gig because I knew they would handle it, you know?”

Everything in the music

With her back to the open window facing the River Liffey, Ronayne’s whole body follows the movement of her chopsticks.

As the beat picks up, he frowns, eyes closed, head nodding to the beat of Guerra’s bass.

Batista catches his eye and Ronayne relents to let Batista’s guitar in. Batista scratches with his face twisted as if straining to lift a weight, his knees bent and his arms locked.

Murphy smiled happily from his piano stool, shaking his head to watch them take turns improvising solo to the melody.

Ronayne then laughs, thinking of the expressions. “We are just getting started. Just vibrate.

It feels good to get into the music, to feel the audience’s reaction to you, he says. “There is no better feeling. The music almost, really goes through you.

It’s intense, he says. “Live music is a 100% spiritual experience.”

“Because it’s our job as musicians to take what’s given to us, what’s on what’s on the roadmap, and make the most of it,” he says. “Really, really being true to that. “

As they play, something about the music gets complicated, as the solos and improvisations build up, and the sounds crescendo.

Each musician has his eyes closed, a distant gaze of concentration.

Until the sound drops back to the melody it left at the start, then to a long final trumpet note and applause.

[CORRECTION: This article was updated on 20 July at 9.52am. Mary Murphy was standing by her cousin before the concert, not her uncle. Apologies for the error.]