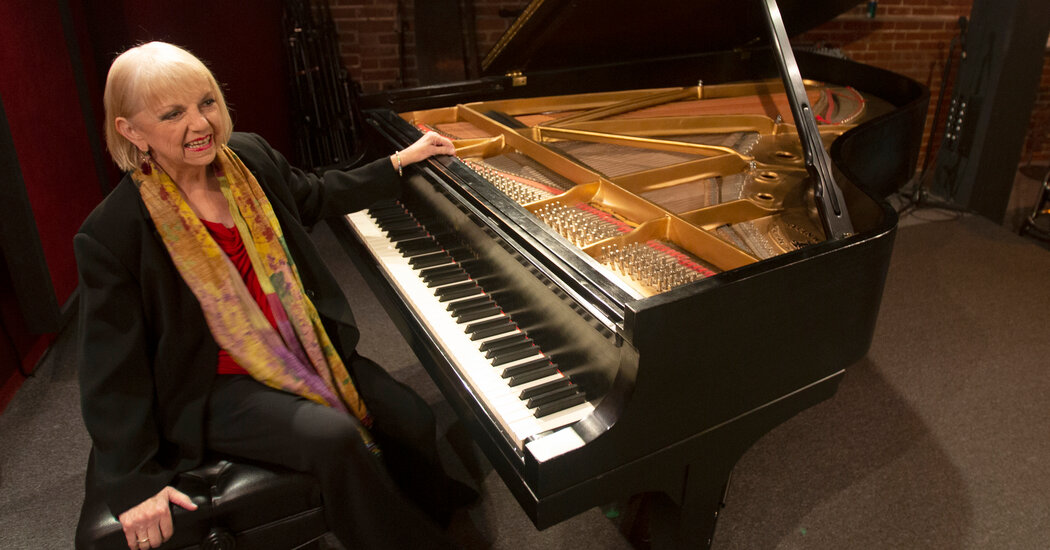 Beegie Adair, whose status as a renowned jazz pianist was all the more notable for where she built her career — Nashville, the birthplace of country music — died Jan. 23 at her Franklin, Tennessee, residence. . She was 84 years old.

Monica Ramey, his manager and frequent voice partner, confirmed the death. She did not provide a cause, but said Ms Adair was in poor health.

If you lived in Nashville and found yourself more of a Cole Porter fan than a Porter Wagoner, chances are you’ve met Ms. Adair at some point in her six-decade career. From the early 1960s, she could be found playing at least once a week at Carousel, a downtown nightclub, or later at F. Scott’s, a restaurant in the Green Hills neighborhood.

Being a jazz musician in Nashville is a lot like being a surfer in Las Vegas, and those who do it need flexibility and restlessness — qualities Ms. Adair possessed in excess.

She performed in hotel lobbies and nursing homes. She and her husband, Billy Adair, have written jingles for television commercials. And she was in constant demand as a session musician, appearing on over 100 albums by a wide range of artists including Dolly Parton, Henry Mancini and Mama Cass Elliot.

“She was everywhere,” Roger Spencer, who played bass in the Beegie Adair Trio, said in an interview. “If there was an opportunity to play, she was there.”

Ms. Adair mainly played American songbook standards, with a restrained and relaxed technique. She adapted to the place: if it was a restaurant, she retired to the background; in a club, she could dominate the room.

“I’ve played with her in just about every type of musical setting you can play in Nashville over the years,” George Tidwell, a veteran Nashville jazz trumpeter, said in an interview. “And I never played anything where I didn’t think she was the right person to do it.”

She released her first album, “Escape to New York”, in 1991. A few years later, she formed her trio, with Mr. Spencer on bass and Chris Brown on drums. They toured frequently, including trips to Tokyo and London. Beginning in 2011, they played annual gigs at Birdland in Midtown Manhattan and later added regular shows at Feinstein’s/54 Below, also in Midtown. They have recorded 35 albums and, according to Ms Ramey, have sold some two million copies over the past four decades.

Back home, Ms. Adair was the de facto leader of the Nashville jazz scene, especially during a difficult time in the 1970s and 1980s when venues closed and gigs were scarce. What drove him forward was the knowledge, not always obvious to the outside observer, that the scene was bigger than it looked, with musicians playing country for the money and jazz for them. themselves, even if that meant nothing more than jam sessions in someone’s basement.

“There are a lot of wonderful jazz musicians here who don’t get heard often because they work in the studio all the time,” she told The Nashville Banner in 1997. “Every horn player who works in the studio is probably a jazz player under their skin.

Bobbe Gorin Long was born on December 11, 1937 in Cave City, Ky., a small town halfway between Nashville and Louisville. She started taking piano lessons at age 5, and as a teenager she was playing in clubs in Tennessee and Kentucky.

Her parents, Bobbe (Martin) Long and Arthur Long, ran a gas station, where young Bobbe also worked when she was not playing the piano. To differentiate her from her mother, her father called her “BG”, after her first two initials, and the nickname stuck.

Ms. Adair earned a degree in music education from Western Kentucky University in 1958. After teaching music for three years in Owensboro, Ky., she moved to Nashville for graduate studies in education at Peabody College, which is now part of Vanderbilt University.

But she was already building a career as a musician in the city’s downtown clubs, particularly along Printers Alley, then and now a hub of Nashville nightlife. By 1963, she had left Peabody to play music full time.

Ms. Adair came under the wing of saxophonist Boots Randolph, a resident Carousel musician best known for her 1963 hit “Yakety Saxophone.” He got her gigs and introduced her to the city’s many producers and studio managers, who, though they mostly recorded country and rock ‘n’ roll, were always on the lookout for session musicians. talented and reliable.

Another local musical luminary, guitarist and producer Chet Atkins, was the first to bring her on as a regular at his recording sessions, and her recommendations brought her a steady stream of work in and out of the studio. She played in the house band for “The Johnny Cash Show” and for local TV host Ralph Emery (who also died this month).

Mr. Adair was a prolific musician himself and built a career as an instructor, eventually becoming a professor at Vanderbilt’s Blair School of Music. In 1995, the couple joined Mr. Spencer and his wife, Lori Mechem, in starting the Nashville Jazz Workshop.

The workshop trained a new generation of jazz musicians in Nashville, and in recent decades the scene has begun to make a comeback, with its former students beginning to gain national recognition. In 2016, Ms. Adair and her trio were invited to perform at the Weill Recital Hall at Carnegie Hall in New York.

“The best thing of all for us was that there were a lot of our Nashville fans there,” she told The Nashville Scene in 2016, a few days after the show. “I think our appearance there is another indicator that people across the country recognize that there are great jazz musicians here and there is an audience for the music.”

Willis Conover: the jazz messiah who defused the Cold War