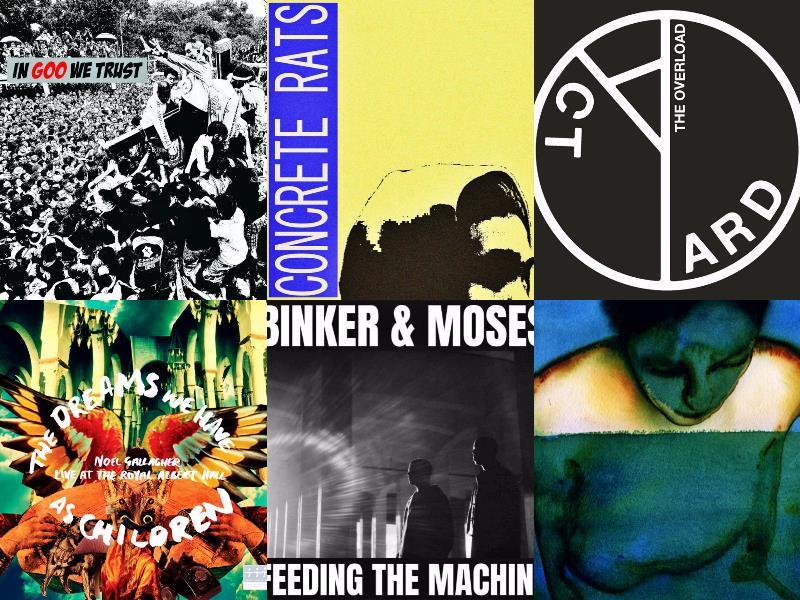 An overload of punk, rock, jazz and Noel Gallagher Live!

GOO, In Goo we trust

We should trust Goo to move loudly on the well-trodden path of punk rock. What the band adds to the noise, firstly, is twisting the dialectic towards rock and roll and secondly, lyrics that have more to do with falling in love than throwing a tantrum. Okay, the opening track, “Itchy Bitch,” finds Goo going totally hardcore so the object of desire can taste a portion of her negativity. The second track, “Never About Me”, however, slows down to old school punk to launch “forever is gone without you” and then goes rock and roll at the right time rather than destroying all the punk rock monsters in “Thing of the Past”, “Valid” and “Little you”. With Goo, punk-fueled love songs manage to touch the heart without moving you!

Warm trumpets occasionally battling with lounge piano tracks and steady drum beats form the bread and butter of this jazzy all-instrumental ensemble. “In Deep State Boogie” the combo even invokes a kind of kundiman vibe while in “Tungsten Part I” the hiphop beat pushes the lounge feel towards melodic soft-rock. “Holy Ghost” provides ample room for the trumpet to roam from scorching to hot to tender and back again without losing its emotional appeal. Given the current state of Pinoy jazz, the Concrete Rats might be on the frontier of new progressive music.

The titular track from British quartet Yard Act’s debut opens with crisp metal that escalates into a pop track midway through the conclusion. Lead singer James concludes the proceedings with general observations on the restlessness of the young and gifted in England today. Joy Division’s “Love Will Tear Us Apart” is a ghostly presence in “Tall Poppies,” a tale of average life in a post-pandemic era, though a bit of Franz Ferdinand sends “The Incident” on an interesting twist on the digital age that is upon us now. It’s the effortless catchy tunes that make the songs slip through despite the wordy talk about the end of man (“Pour Another”), big trouble on the digital frontier (“The Incident”), and war and peace in “Land of the Blind”. .” Think of Yard Act as a more ambitious Seaford Mods and you’re halfway ready to enjoy Yard Act’s overabundance of peculiar delights.

Calling a band Just Mustard seems flippant, but the freshman Irish band that goes by that name know their way around producing experimental music that matters. Their main business is overpowered sounds that check out the name of shoegaze, industrial and goth to evoke the feeling of “being under water and under something very heavy”, as the singer of Just Mustard, Katie Ball, to a music journalist. It’s Miss Ball’s ethereal voice that takes center stage as her bandmates musically evoke sadness at dawn (“Early”), madness on a rainy morning (“Sore”), a feeling unexplained loss and threat (“Mirrors”) and futile attempts to fit in (“I am you”). Overall, the music can be precious, even pretentious, but there’s no denying that it’s captivating, track after track.

Binker Golding and Moses Boyd form a saxophone and percussion duo that is now one of the various driving forces behind London’s bustling jazz scene. A shrewd and invigorating perseverance is at the heart of their continued exploration of the far reaches of free jazz. But don’t be fooled by the quasi-intellectual underpinnings of the term. It’s simply no guitar, no bass, diving into the confines of progressive rock, with the sax leading the charge backed by drums that sometimes explode in a kind of Keith Moon rage. Most of the tracks actually quietly begin no doubt to draw all comers into Binker & Moses’ soft-shrill-loudest-soft cycle of commanding art before the erupting cacophony erupts. Best of the best: “Asynchronous Intervals”, “Feed Infinite”, and “Because Because”.

A reissue of Noel Gallagher’s first live concert after leaving Oasis, compiling his performances at the Royal Albert Hall for the Teenage Charity Trust in 2009. Thirteen years later and several shows later with his post-Oasis band, High Flying Birds, the selected tracks can’t help but confirm that Noel Gallagher is a top talent, an excellent singer-songwriter with or without sparring partner Liam G. But don’t go whining that he’s the sixth millionth Beatles wannabe because the remakes of Oasis classics on this collection can stand on their own terms minus the nostalgia. Even the interpretation of the immortals of the Beatles bears the marks of an impetuosity worthy of Oasis and therefore of Gallagher bros.

The Indigo Girls in Florence, Django-jazz in Amherst, etc.