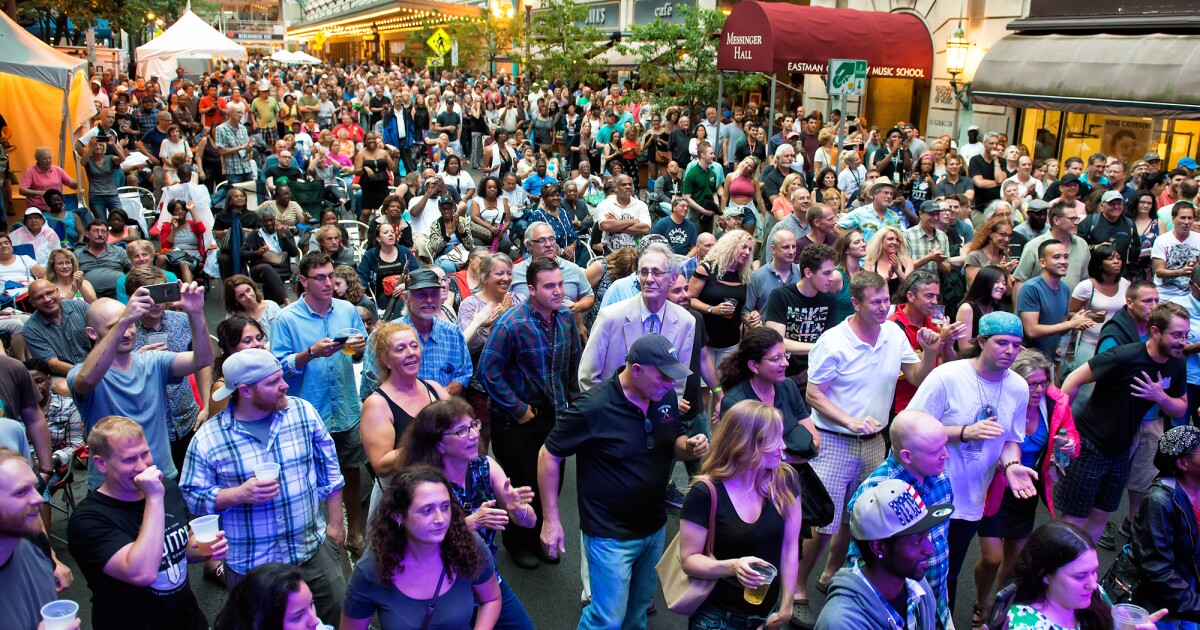 Any other signs besides the reduced threat of twisted ankles?

Huge tents go up on East, Gibbs, East Main Street and the downtown grazing area of ​​Parcel 5, all ready for the music. Food trucks fill up with gas. And a whole city is looking forward to nine days of jazz haiku submitted by the WXXI Arts & Life team.

Many music fans — and people who just like to see a city’s downtown used to its best potential — have patiently waited two years of pandemic shutdown for this. This is reflected in the fact that many people who purchased their Club Passes for the 2020 festival have kept them for the time being.

“We had single-digit responses for refunds,” says Marc Iacona, co-producer and executive director of the festival.

He calls Club Pass holders “a connected crowd”. But they will only be pending for so long. Patience has its limits.

“Two years is patience,” says Iacona. “Third year, if we didn’t have one…”

It’s hard to predict what harm out of sight, out of mind, could do to the mojo of such an event. Organizers estimate it drew more than 208,000 people in 2019. This is record attendance for the jazz festival, recognized as one of the best events of its kind in the country.

“We had to do it,” Iacona says of the decision he and co-producer and artistic director John Nugent made to go ahead with this year’s festival. “Not just for the community, John and I had to do it for us. Because you come to a crossroads and say… what do we do now? Is it really going to happen again, isn’t it? So it’s really crucial that it happened.

This year’s jazz festival, on the 19th, will have a completely different face. No more Kodak Hall to Eastman Theater shows. The same goes for the two free outdoor stages at either end of East Avenue – stages which in recent years have drawn massive crowds to the closed streets, an iconic image of the jazz festival. All of this energy is channeled a few blocks away, to plot 5, off East Main Street.

These are the big changes. Another difference, Iacona suggests, is the mood of the jazz festival audience.

“I think what’s different is that people have kind of been locked up for two years and they’re getting used to going back to events,” he says. “Obviously it started first in theaters and then some small gigs, some small festivals. And now, I think – because things are clearing up a bit in terms of restrictions and regulations – I think people are finally ready to go.

It is more than public boredom that drives such events. Iacona and Nugent rewired the festival to accommodate shifting venues and changing economies. On this last point, it has received substantial public funds from the grant for operators of closed sites.

“We made the decision to say, ‘We’re going to take the majority of this grant and apply it to free programming for the community,'” Iacona says. According to his estimate, 60% of the festival is free.

“We wanted to do the right thing with taxpayers’ money.

Here’s what your money gets you. Nine nights of free shows at Parcel 5. On Friday night, jazz trumpeter Chris Botti will make his fifth appearance at the festival; Iacona, another trumpeter, considers Botti a friend. Botti continues at 9 p.m., after two bands from Rochester: The Dave Rivello Ensemble at 5 p.m. and CMC (it’s Casey Filiaci on piano, bassist Mark Terranova and drummer David Cohen) at 7 p.m.

Also free on the last weekend of the festival: the acoustic Bacon Brothers, including actor Kevin Bacon, and Drew Holcomb & the Neighbours. The latter takes the place of Wynonna Judd, who gave up after the recent death of her mother and musical partner, Naomi Judd. Both shows take place at a new venue for the festival, Dr. Martin Luther King Jr. Memorial Park.

On paper, these free shows may not reach the level of previous jazz festival headliners such as James Brown, Dave Brubeck, Oscar Peterson, Jeff Beck and banjo star Steve Martin, who also told a few jokes. But the music is in the ear of the beholder, of course. And Iacona hinted that the festival is considering booking Wynton Marsalis next year.

A disused Gibbs Street, renamed Jazz Street during the festival, remains a vacant stage. The opening night is typical of the offerings, with soul and roots rocker Nikki Hill.

All of these shows are outdoors. “Weather is the wild card, and it always is, pandemic or not,” says Iacona.

“It’s really about the free shows and the weather.”

Will festival attendance, in this season of health concerns, reach the heights of recent years?

Familiar scenes such as the Harro East Ballroom, Christ Church and Anthology have disappeared from the map; the jazz festival has not been immune to bickering between the festival and its venues. Uncertainty has been in the air more than the music for the past two years; Bethel Christian Fellowship had been announced as a new location in 2020, but it disappeared from discussion. The following year, the jazz festival announced it would be moving to the Rochester Institute of Technology before the whole idea was quietly dropped.

The new Club Pass venue is the Hyatt Regency Ballroom, which will also host the after-hours jam session. The unique aspect of this place is its two levels: the stage and seats are on the ground floor, and customers can admire the stage from the lobby on the second floor.

Two places may seem new at first glance, but they are simply renamed. Glory House International is the former Lutheran church of the Reformation, showcasing some of the Nordic offerings of years past. However, the first two Glory House nights come to the New York festival: singer Tessa Souter, making her seventh appearance, and the great progressive jazz ensemble NYChillharmonic, which surely gets some sort of best name award.

And the theater in Innovation Square is the old Xerox Auditorium. His Club Pass shows include an opening night with the self-proclaimed California Guitar Trio, and later Stephane Wrembel’s Django Reinhardt-inspired guitar and sassy Davina & the Vagabonds.

Kilbourn Hall returns as a Club Pass venue, showcasing some of jazz’s purest acts, including the Jeremy Pelt Quintet and scat singer Kurt Elling. Max of Eastman Place, the Montage Music Hall, the pristine piano-laden Hatch Recital Hall, roots programming at the Little Theater and the Wilder Room are also back.

Temple Theater has a handful of returning favorites, including singer Robin McKelle and world-renowned vibraphonist Joe Locke, who both grew up in Rochester. Locke is here for the seventh time. Guitarist Bill Frisell is also on hand, making his ninth jazz festival appearance.

The Rochester Regional Health Big Tent also returns as a Club Pass venue, with an opening night of charming Western swing jazz from the Hot Club of Cowtown.

The revival of the festival is what Iacona says he hopes will be “a catapult to better times”.

The full range, plus three- and nine-day Club Passes, are available at rocksterjazz.com.