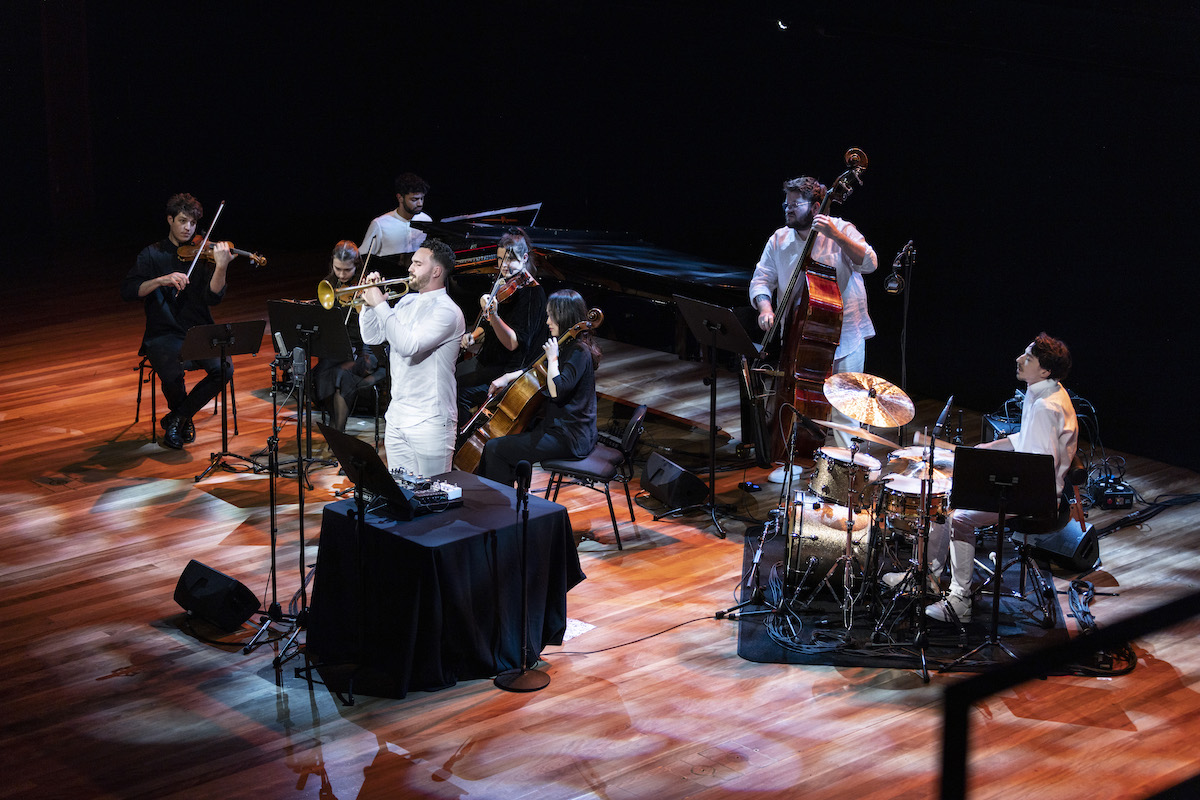 The Freedman Jazz Fellowship was awarded to Sydney-based trumpeter and composer Tom Avgenicos.

Avgenicos performed at a sold-out concert at the Sydney Opera House for the Fellowship’s first performance in two years, alongside runners-up saxophonist Flora Carbo and drummer Holly Conner.

The judging panel was made up of Sydney Conservatorium jazz professors Steve Barry and Virna Sanzone, and Macquarie University lecturer and saxophonist Andrew Robson, who himself received the scholarship in 2003. Speaking about the quality of this year’s nominees, the judges said: “The three finalists each presented incredibly sophisticated programs of original music, which they performed with conviction and creativity. Each finalist demonstrated a highly developed musical language that pushes the music in new and exciting directions.

Avgenicos received the scholarship after performing three original works, Detached, I’ll go where you go and Stymia. These pieces will be part of his next project Freedman, Ghosts Between Streams. An excerpt from his proposal reveals what to expect from his work:

“With a paramount environmental concern, Ghost Between Streams will explore themes of escape and despair that emerged from personal experiences in my local national park, Stringybark Creek in Cammeraygal country. The Stream is a place of inspiration, full of sights, smells and terrains that inspire evocative musical ideas. Along the trail are plaques telling stories of the area’s rich flora and fauna and “a magical place” where children swam and played. »

“This is juxtaposed with the rapid urban development in the surrounding area, encroaching on the natural habitat. On the outskirts of the reserve, the deafening noises of construction machinery and traffic can be heard, echoing down the valley and fading into faint echoes as one goes deeper into the creek. Runoff from building sites can be seen in the river and sometimes the pollution is so bad, Sydney Water puts up biohazard signs and closes the footpath.”

He leads the quartet Delay 45, which has performed at the Wangaratta Jazz Festival and the Great Southern Nights, and participates as a member of Mike Nock’s NOCTET. He also co-directs Tuckerbox, an ensemble experimenting with the textures of chordless instruments, as well as the Avgenicos Brothers, a project that fuses modern jazz with electronic soundscapes in collaboration with his brother, saxophonist Michael Avgenicos.

“I’ve always wanted to use my music as a way to connect with other people, artists and cultures. Over the past 12 months or so, I have explored my practice through multidisciplinary collaboration, working with artists from film, dance, choreography and performance art,” says Avgenicos. limelight.

“When I first started collaborating with these artists, my initial intention was to create musical spaces to showcase their incredible work, but through the collaborative process of rehearsing and sharing ideas, it quickly became apparent that they were shaping the music, and it was almost like I had new members in the band!

Talk to limelight on how working with artists of different mediums began to evolve his practice, he says that receiving the scholarship will provide the space and means to advance these collaborations.

“With the artists I’ve worked with, I’ve found much of their practice to be very similar to mine. For example, in my music, I like to use simple patterns and compositional devices as a way to direct improvisation.

He has pledged to use the $21,000 prize to create an interdisciplinary work for Delay 45, incorporating electronics to expand the capabilities of their acoustic instruments in collaboration with Ensemble Apex, whose string quartet provides a “new sound palette” at work. Jordan East, a motion graphics artist who contributed to RÜFÜS DU SOL and Vivid 2016, will create generative visuals to respond to live sound and movement, while choreographer Reina Takeuchi’s “the combination of choreography and improvisational dance will create a symbiotic relationship with sound and movement”. Takeuchi previously collaborated with Delay 45 on a short film released for their 2021 album, Flow.

The finale was compared by ABC Jazz and ABC 702’s James Valentine and featured a duet performance by pianist Mick Nock and 2006 scholarship recipient Julien Wilson on saxophone.

Holding their first award in 2001, the Freedman Fellowship is one of Australia‘s most distinguished music awards. It offers annual classical and jazz awards to esteemed and established musicians in the field. Jazz Fellowship applicants are nominated by leading Australian jazz musicians. They must be under the age of 35 and submit both a performance recording and a detailed description of how they will use the $21,000 prize.

Guitarist Hilary Geddes, recipient of the 2021 Jazz Fellowship, has toured her quartet through the Riverina, Goulburn and Canberra, conducting live performances and workshops through the award. The Jazz Fellowship is funded by the Freedman Foundation, chaired by Laurence Freedman, managed by The Music Trust and administered by SIMA.

Receive the Jazz Scholarship in recognition of a collaborative project, Avgenicos’ work is about reshaping notions of the boundaries between jazz, classical and experimental electronic genres, as well as the structure of traditional performance, with the inclusion of dance and audiovisual elements.

“Multidisciplinary work will broaden our skills as composers and improvisers by finding new ways to respond to different stimuli and ideas. It has the ability to enhance and shape music by conveying the underlying feelings of a piece in a visual form; it connects jazz with audiences in other creative spaces, and it’s very important that our art form is as inclusive as possible,” says Avgenicos.

“I’ve been able to take my music to spaces outside of the stereotypical jazz setting, including art galleries, community spaces, and other multipurpose spaces. Multidisciplinary collaboration has already established a line of work and collaborative practice that I look forward to exploring further!

From rock to country to jazz, Wilco’s Nels Cline says, “I can play all this wonderful music” – InForum